A super-limited large-scale triple collaboration that incorporates the work of photographer Naoki Ishikawa is now available!

FASHION
3 years ago
by GO OUT

Wearssets are a brand with the concept of “wearing an art piece”, while Goldwin are brand familiar to many and boasts overwhelming strength in the outdoors community.

Pre-orders have started for the ultra-limited triple collaboration “K2 IWG”, which incorporates the work of photographer Naoki Ishikawa, who travels around the world. The items in the collection combine the sense and technology of both brands. 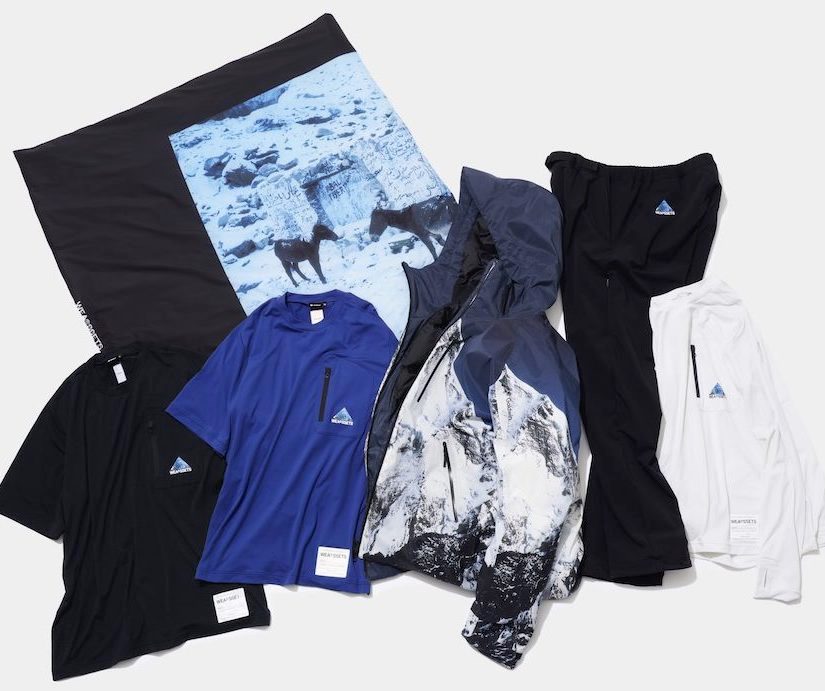 Triple collaboration “K2 IWG” is a special collection consisting of 7 items. The work of photographer Naoki Ishikawa is included in each product. In addition to the type 6 in the photo, a camera bag is also available. (Check the next page for details)

This collection is named “K2 IWG” from the initials of the three people who are involved in the K2 photo by Ishikawa as a motif. A total of 7 models are planned for launch, each with a pre-order system limited to 100 pieces. (Introduction of each product on the next page).

At “Goldwin Harajuku”, which opened prior to the reservation start on March 1, we interviewed Mr. Ishikawa of Wearssets, and Mr. Arai, who represents Goldwin. 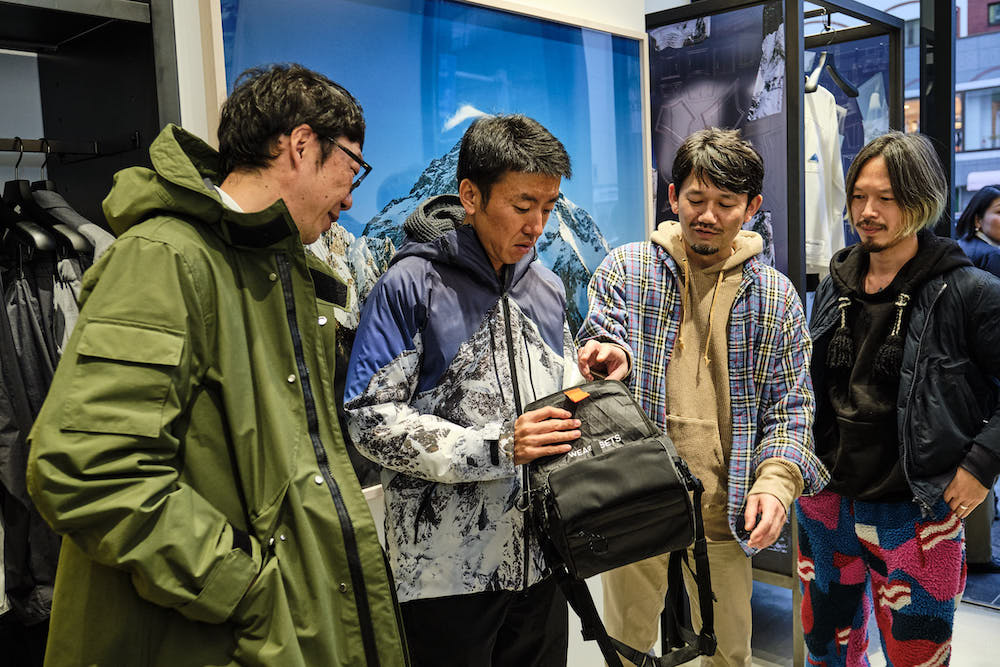 What united the three?

“Mr. Ishikawa, who has been an adventurer traveling the world since his teens and a photographer whose work resonates with peoples hearts. I have been involved in his solo exhibitions and have always hoped to be able to create something together one day.” said Wearsset producer, Sakaguchi. 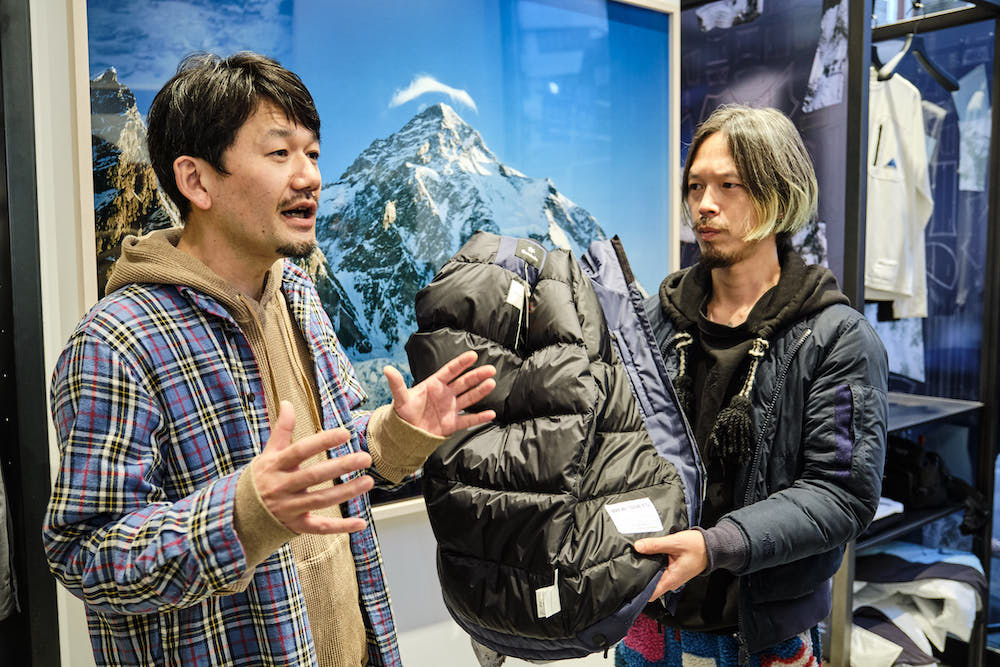 Wearssets dual name. “The serial number will be provided by Mr. Ishikawa at the delivery meeting.”

Wearssets CEO and designer Akutsu agrees with the idea of Wearssets and Naoki Ishikawa.

“I heard about the idea from Sakaguchi and it seemed very interesting. But I was concerned I couldn’t express Ishikawa’s personality and power alone, so I decided to outsource to another expert professional in the form Goldwin.” 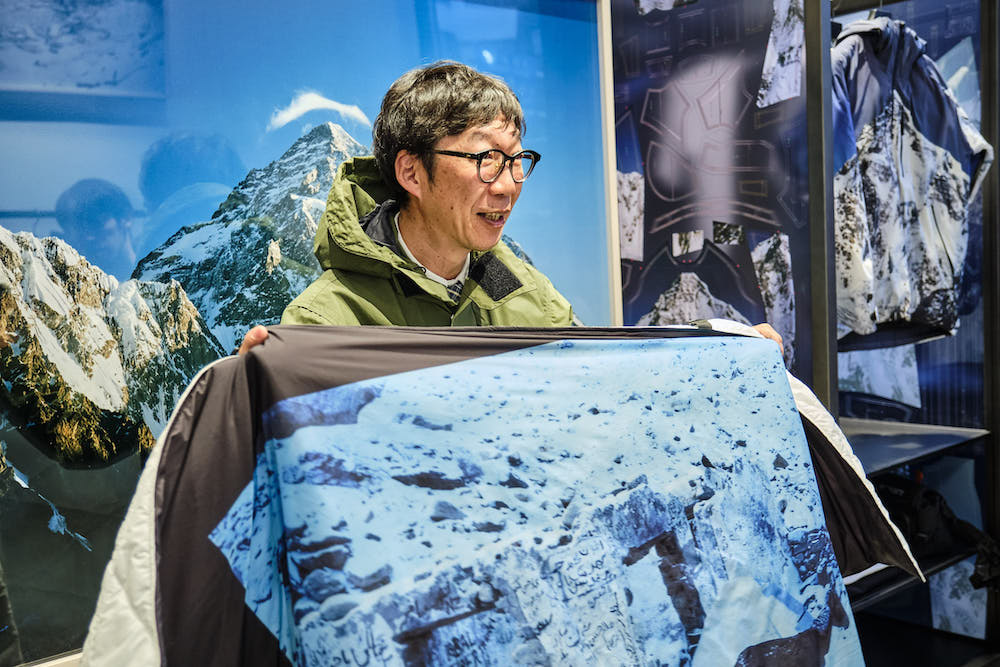 “The functional part was relatively easy because I got a concrete and realistic plan from Ms. Ishikawa. However, it was difficult to get the color of the picture accurate.” Arai was initially troubled at the prospect of meeting the expectations of each creator.

“I personally have read Mr. Ishikawa’s books and am one of the fans who deeply empathized with him, so I am grateful for the fantastic opportunity,” said Arai of Goldwin.

“When I actually started making it, I had to express the creator’s feelings faithfully, which was quite a bit of pressure (laughs).”

Ishikawa first heard about this project roughly one year ago.

“It was just before I challenged K2, and it was a time when my head was full of ideas of adventure. It was an exciting time in my life so I am happy to talk about it. I really wanted to use K2 as it is a place that I love and respect.”

After returning to Japan, he sent some of the photos he took of K2 to Wearssets. 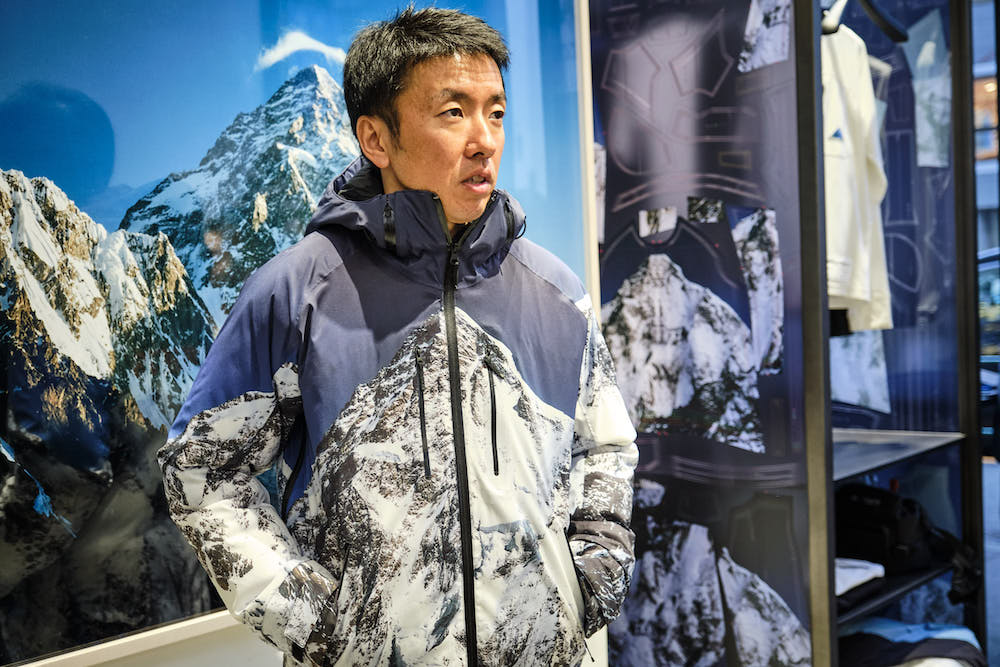 Printed on the down jacket is K2, which is a source of inspiration for Ishikawa.

According to Wearssets, who selected the photos from the works that arrived, “We both immediately were drawn to the photos we chose. We were able to smoothly decide the picture that everyone involved was satisfied with.”

Mr. Ishikawa himself seemed to be satisfied immediately with the choices. “We were able to use the most memorable K2 photo from my perspective. I was however a little surprised at the choice of the Donkey’s photo used for the cape (laugh).” 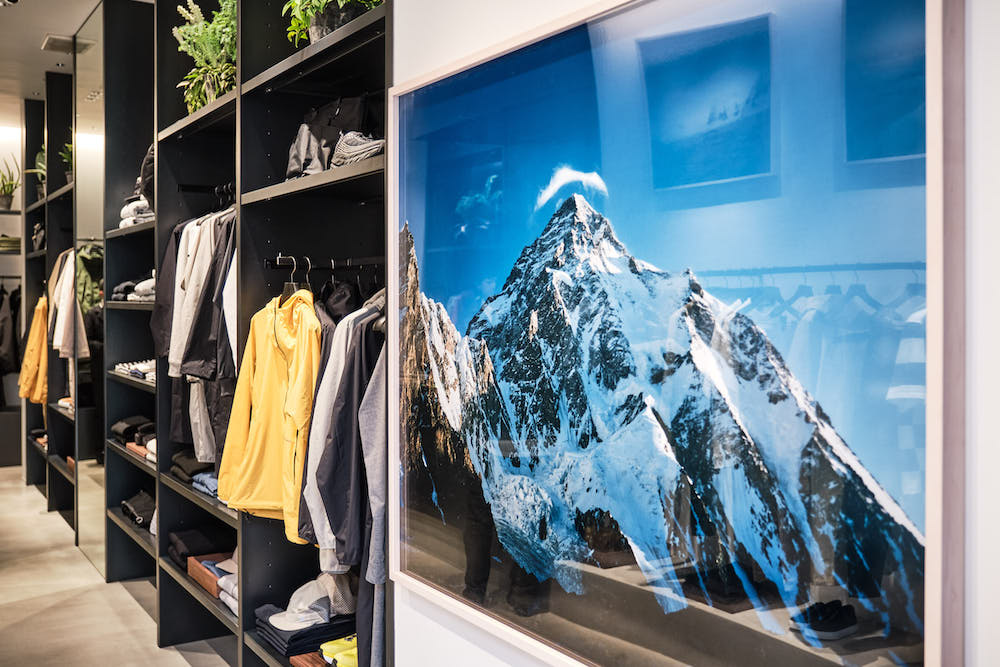 The photos used in the collaboration are on display at “Goldwin Harajuku”.

The towering form of K2 is used for the logo and jacket. It is a favorite work of Ishikawa and can be said to be a symbol of the K2 IWG. 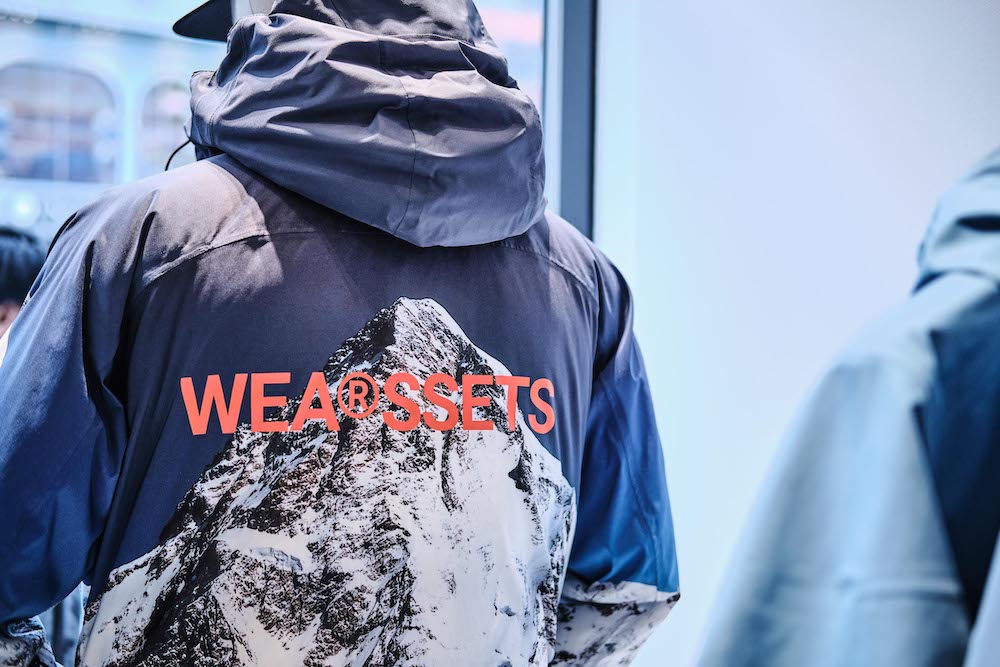 This is a down jacket with K2 photos all over it. On the back is the Wearsset logo printed in emergency color.

“We had a hard time accurately reflecting the contrast between the blue sky, the mountains and the whiteness of the snow with textiles” said Goldwin’s Arai, who oversaw the products.

The padded cape features photos of donkeys taken at the Pakistani military camp. 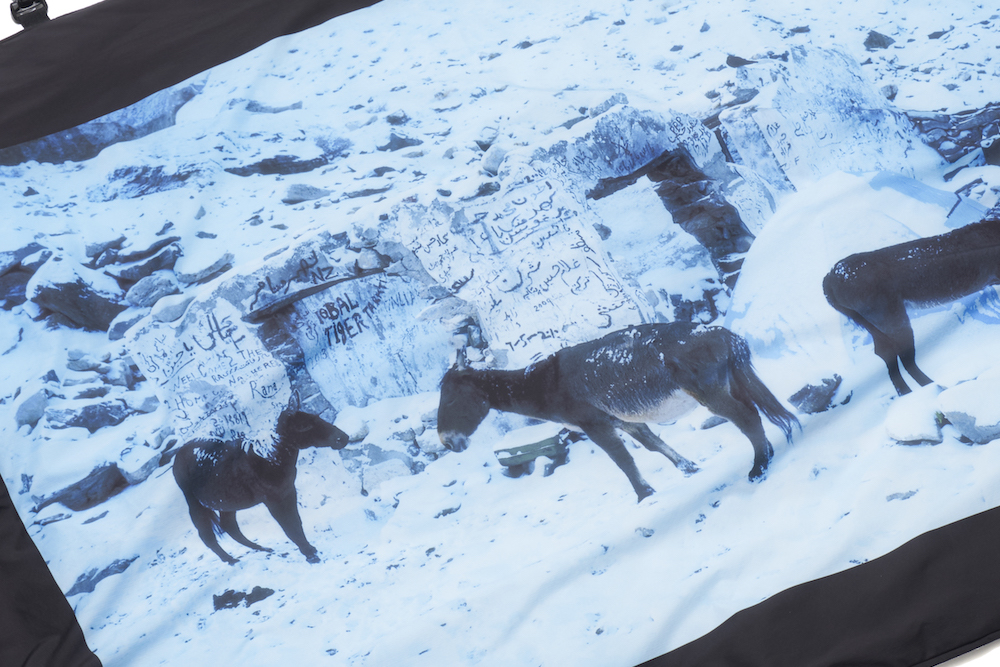 The cape has boldly imprinted photos of the Pakistani military camp where Arabic graffiti especially stands out.

“Arabic graffiti looks cool. This shows a military camp that has already been disbanded and can’t be seen anymore. I think that such an occurence is unique only in photography,” said Sakaguchi. 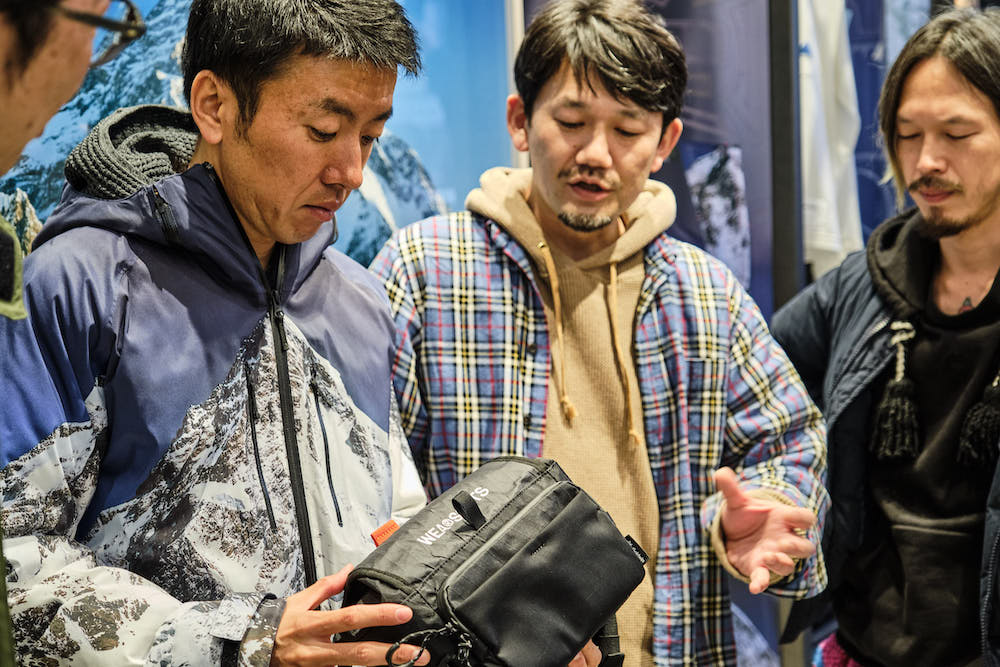 The camera bag is designed to be carried around the chest, based on Ishikawa’s idea. Because you can open and close the bag with a magnet and hook, taking out a camera is smooth and stress free.

The essence of Ishikawa is not just his photography. All products include his viewpoint as an outdoor enthusiast.

“In addition to the basics such as high heat retention and waterproof fasteners, we also prioritized the ventilation and storage capacity. We wanted to include functionality that we felt necessary from our own actual experience.”

The thoughts of “Goldwin Harajuku” after seeing for the first time. 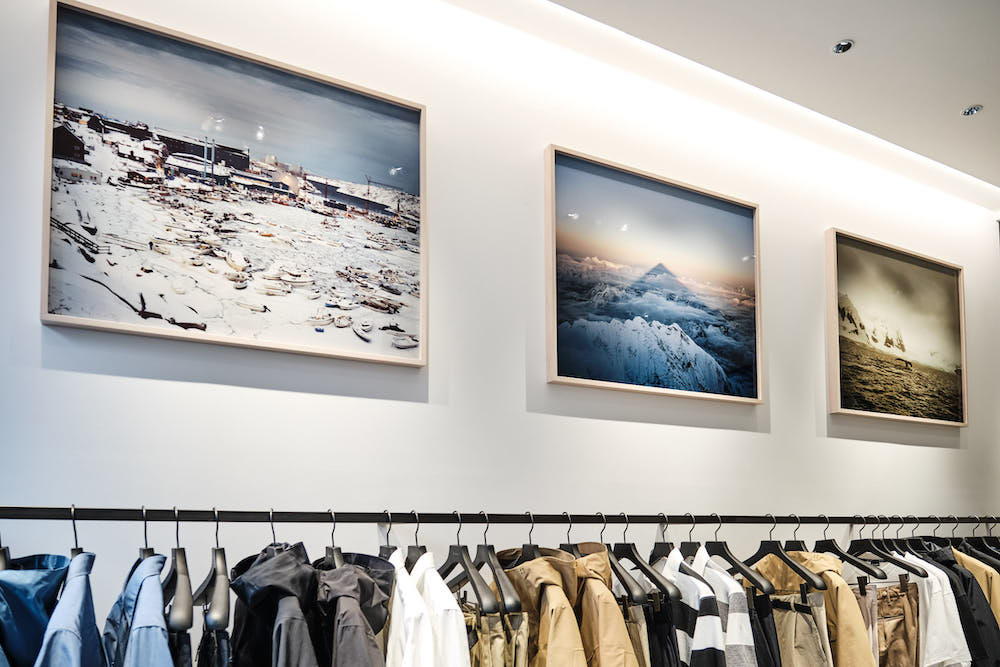 Mr. Ishikawa spoke about the K2 IWG display at the entrance of “Goldwin Harajuku”. “It’s not a big shop, but it’s a strong shop. I have exhibited works that photograph the three extremes of the South Pole, the North Pole, and Everest, where you can’t live without using your body and survival skills to the fullest.” 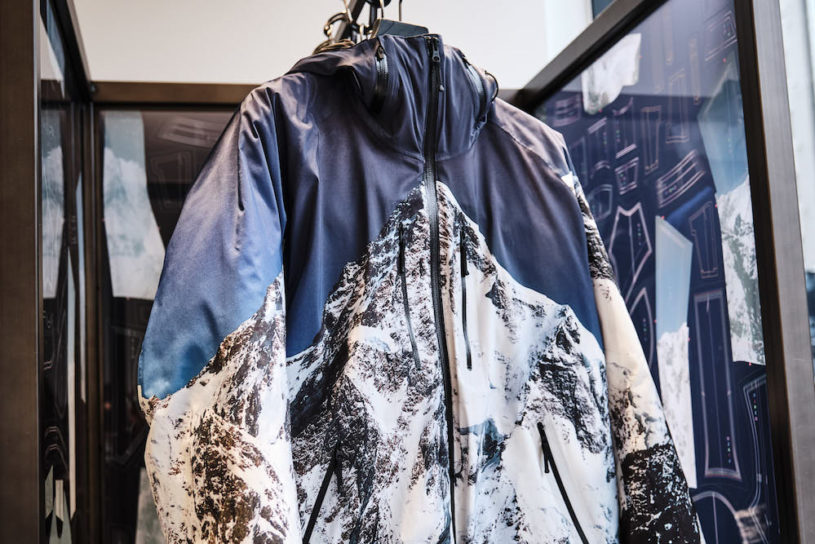 Akutsu-san says, “I’m really happy with how the down jacket stands out. Even though it’s a shop in the busy young district of Harajuku, it’s a mature outdoor shop that will be loved by a wide range of people.”

The “K2 IWG” collection features the motifs of iconic peaks in the Karakorum Mountains, which will draw admiration from outdoorsman.

The “K2 IWG” consists of seven products that have captured the majesty and ruggedness of the outdoos by three people who resonated with the concept of wearing clothes as an art piece.

Each item has a pre-order sales system limited to 100 items. At the time of delivery, the items will be numbered “1 to 100” to highlight the limited edition appeal. Take a look at the collection to see what’s so special about. 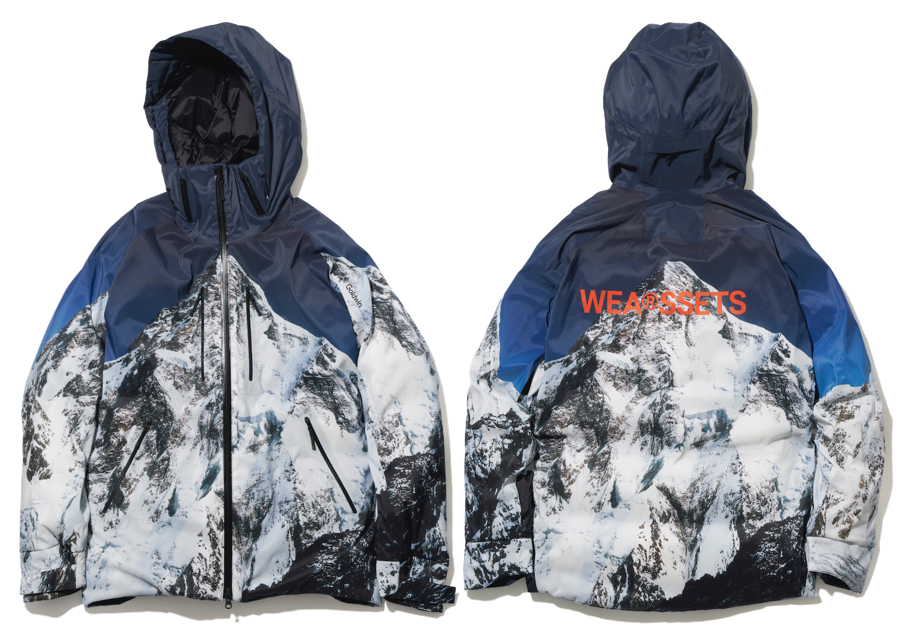 The down jacket has ventilation functionality around neck and under the sleeves while realizing natural warmth due to the far-infrared effect. In response to the direction of Mr. Ishikawa who carries many items, various pockets with a large storage capacity are adopted. Wearssets logo is printed in emergency color on the back. 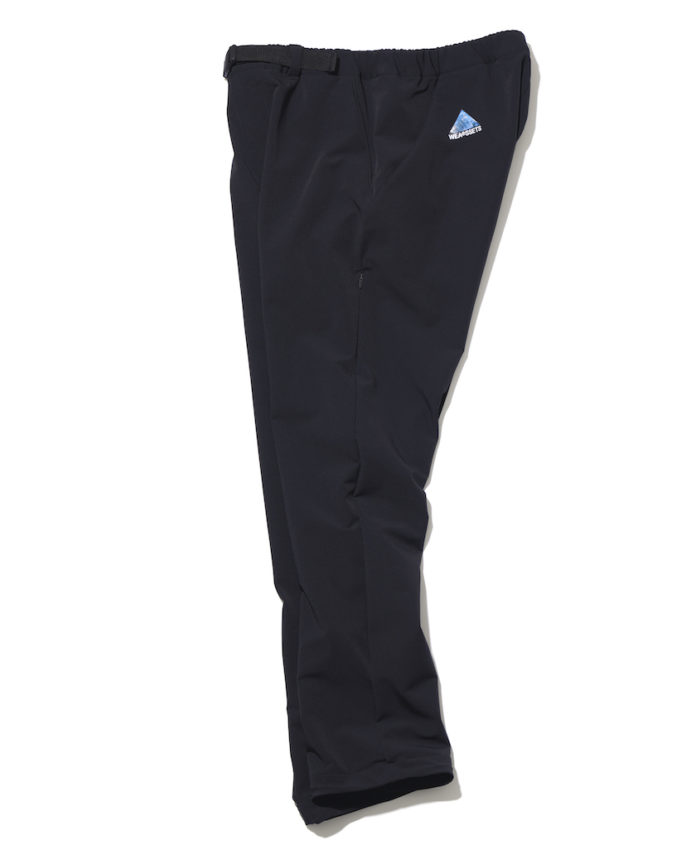 High-end pants that can be used for daily life or to reach base camp, with inspiration from Mr. Ishikawa’s personal favorite pants. They are durable and have excellent elasticity, and are equipped with ventilation due to concealed fasteners on both sides. It comes with enough pockets while also boasting a sophisticated slim silhouette. 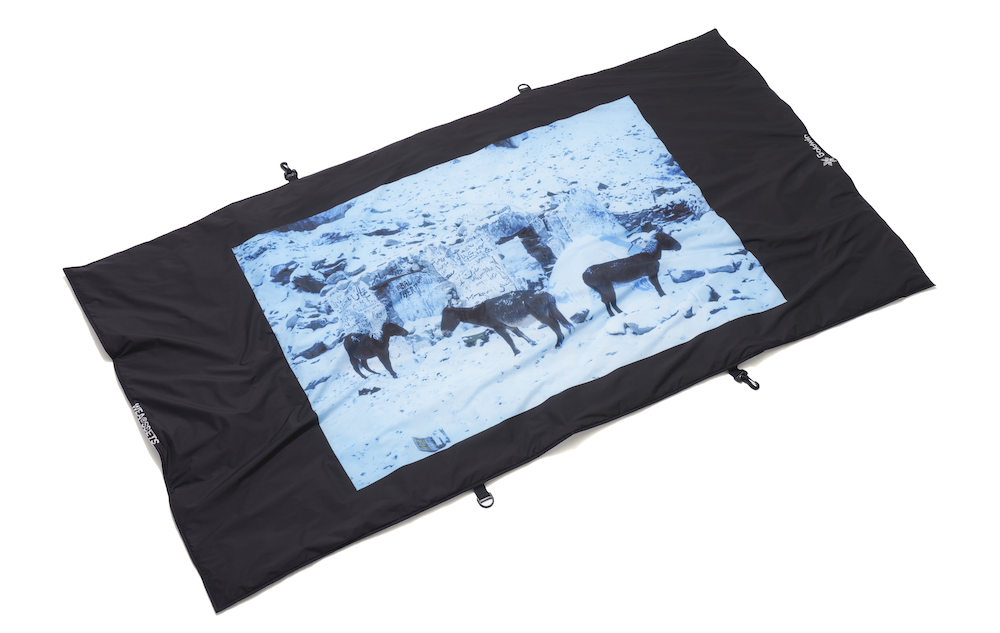 The cape has versatile padding born from Ishikawa’s own experience. It can be fixed around the shoulder so as to wrap around the whole body, and it can be used as a mat or quilt when spread. Because it is pocketable, portability is also excellent. PrimaLoft is adopted, and the lining is comfortable because it is made of an antistatic material. 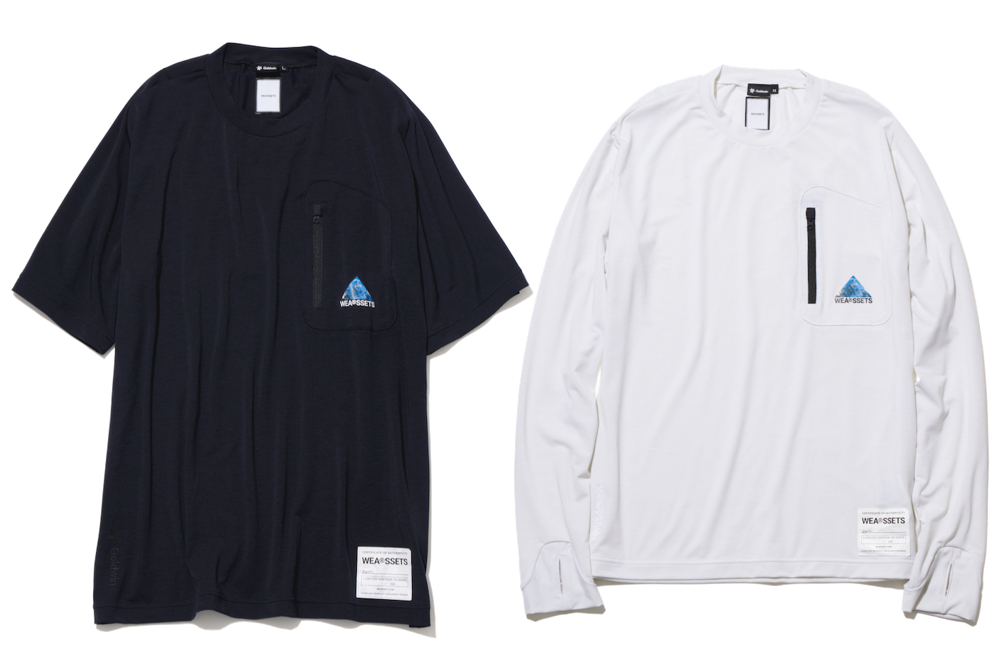 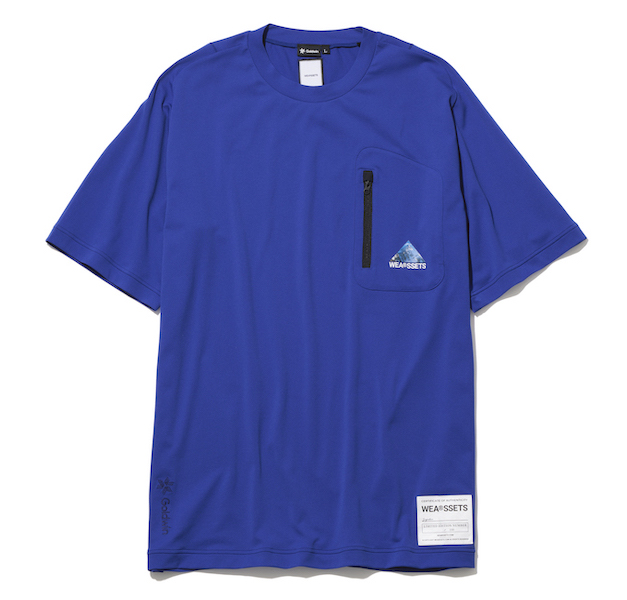 A convenient pocket on the chest makes this useful not only in town, but also in the mountaineering scene. The 2 upper models feature a wool-blend, and the lower model also uses a material with high sweat-absorption and quick-drying properties. In both cases, the switching part of the sleeve is a smart seam specification prevents skin chaffing. There is little discomfort even if worn for a long time. 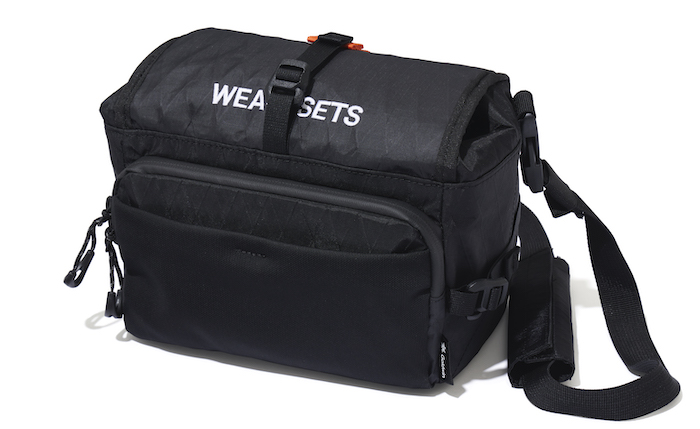 When taking photographs in harsh environments, removing the camera from the bag pack is a burden, so it is designed to be carried around the chest. If you change the strap parts, you can attach it to a backpack or make it a shoulder bag. It comes with a sleeve for a medium format film box.

This is a triple collaboration that conveys the splendor of nature that is harsh yet beautiful, and makes it easy to feel the admiration for the outdoors. Check the Goldwin website for details on ordering. I want to check it out early along with the recently opened Goldwin Harajuku.

The third global Goldwin retail store is opened in Harajuku. 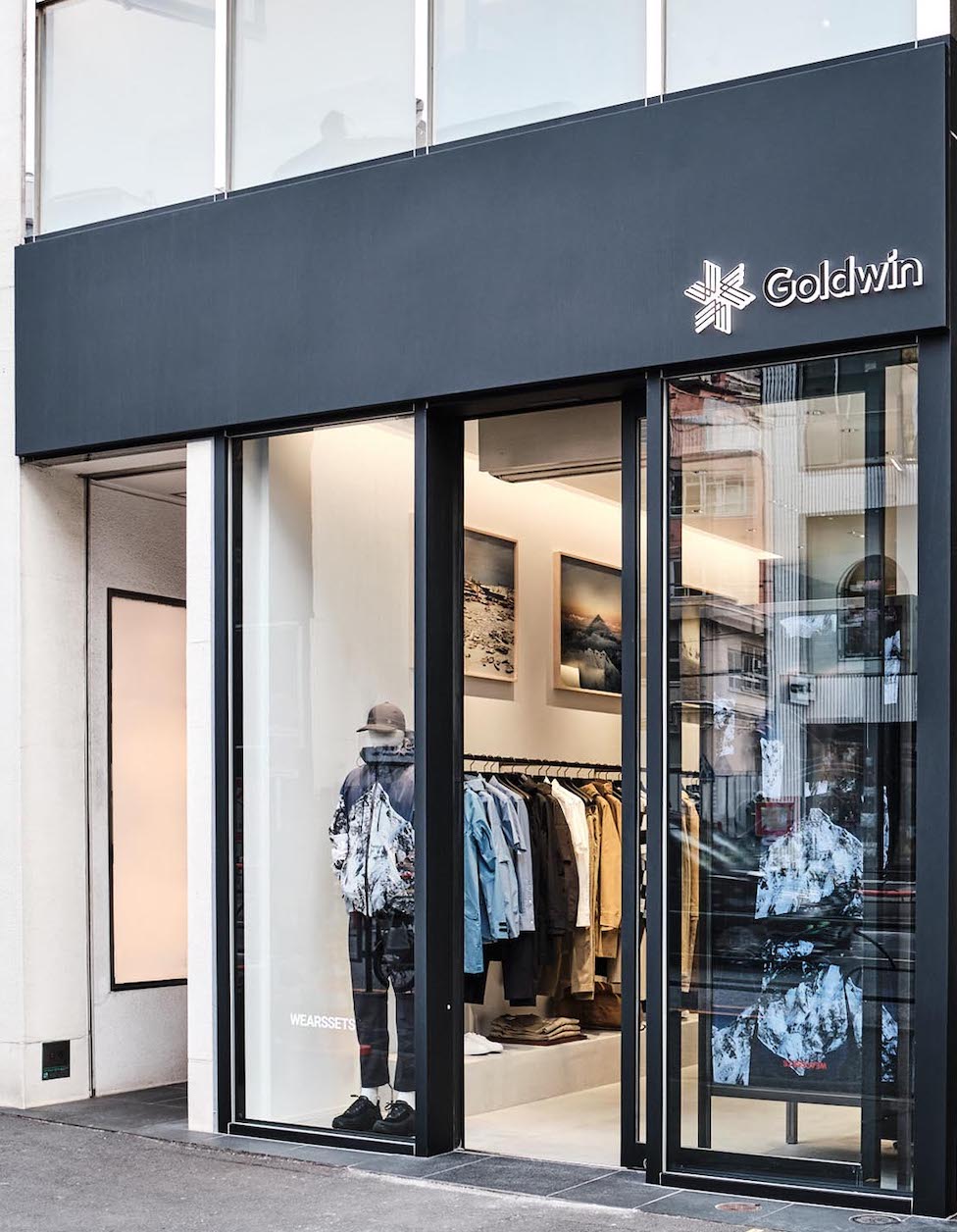 The Goldwin Harajuku exterior. At the show window, the down jacket, which is the main product of the triple collaboration “K2 IWG”, is on display.

Goldwin Harajuku is the third directly managed Goldwin store, that now includes Harajuku, Marunouchi and San Francisco, a sacred place for outdoor fashion. In recent years, Harajuku, where various cultures come and go, is just the right place for the brand, which has gained popularity across traditional demographics. 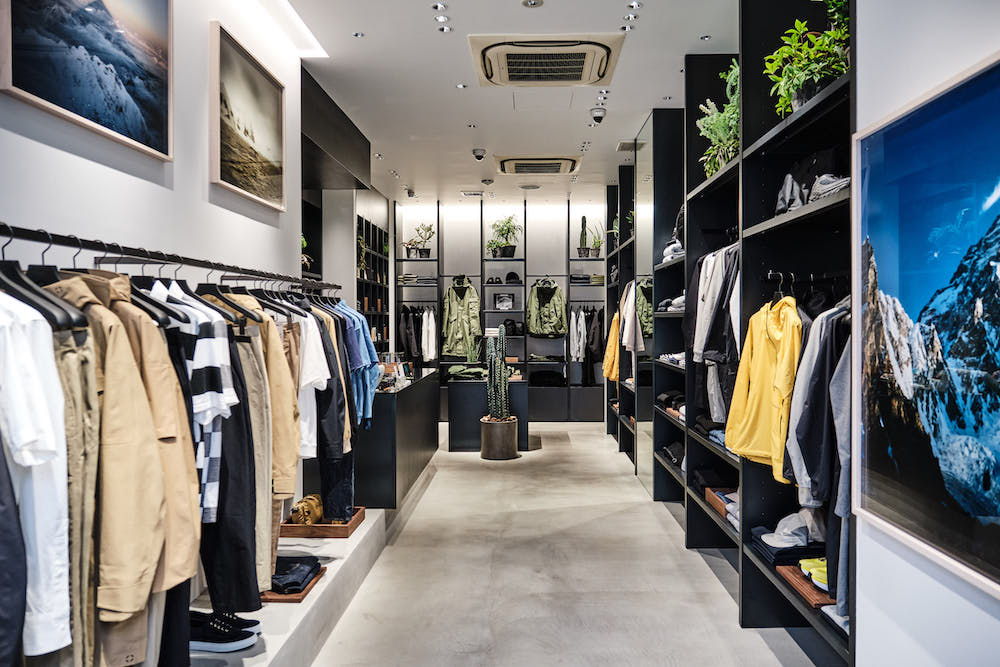 The interior is very Goldwin like, and it is a sleek and sophisticated space. While the products are lined up neatly, the photographs taken by Naoki Ishikawa, which highlight the magnificence of nature, and the plants arranged in various places will stimulate the desire for the great outdoors.

The store features a wide variety of functional, beautiful items selected according to the seasonal theme from all of Goldwin’s lineups, including K2 IWG, skiing, outdoor, athletic, C3fit, and lifestyle.