The Cinchilla Snap T, one of Patagonia’s iconic products, was created in 1985, 35 years ago.

Originally born as an innovative outdoor sportswear, Snap-T eventually established itself as a functional daily wear and blended into the city life from the outdoors.

This time, let’s focus on the latest collection while looking back on the history of the Snap T. 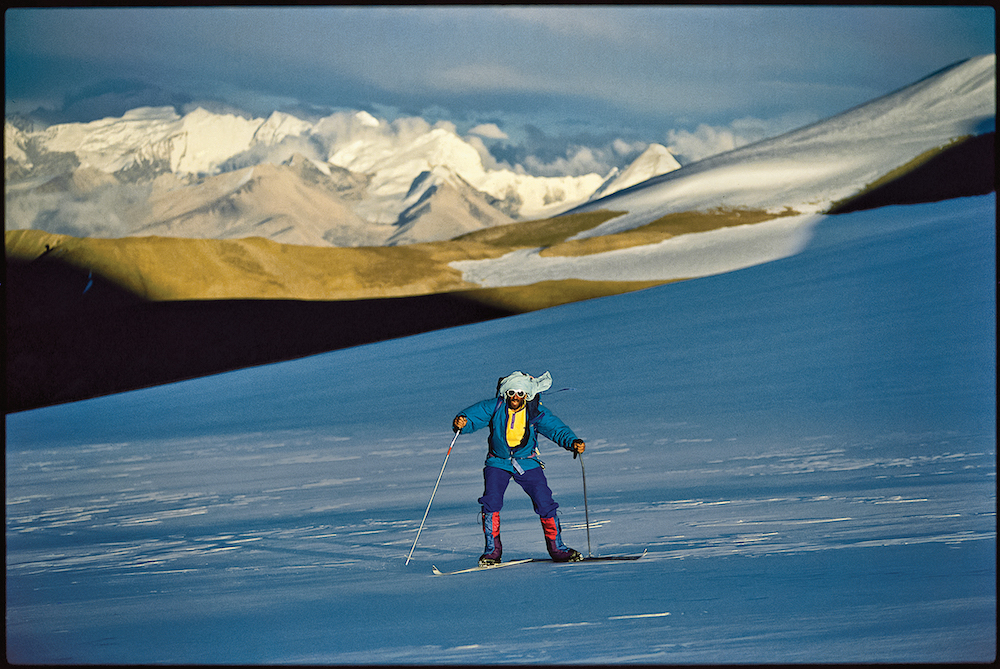 Snap T was the icon of “Cinchilla”.

Patagonia has been developing fleece fabrics made from polyester with textile manufacturer Molden Mills since the 1970s.

Early fleeces were excellent in lightness, warmth, and quick-drying, but they also had various problems such as one-sided brushing, low strength, and pilling. However, they overcame these issues and succeeded in developing a high-performance fabric that is now widely known as fleece.

Patagonia named this fleece “Cinchilla”. And one of the first Cinchilla products to appear in 1985 was the Snap T. 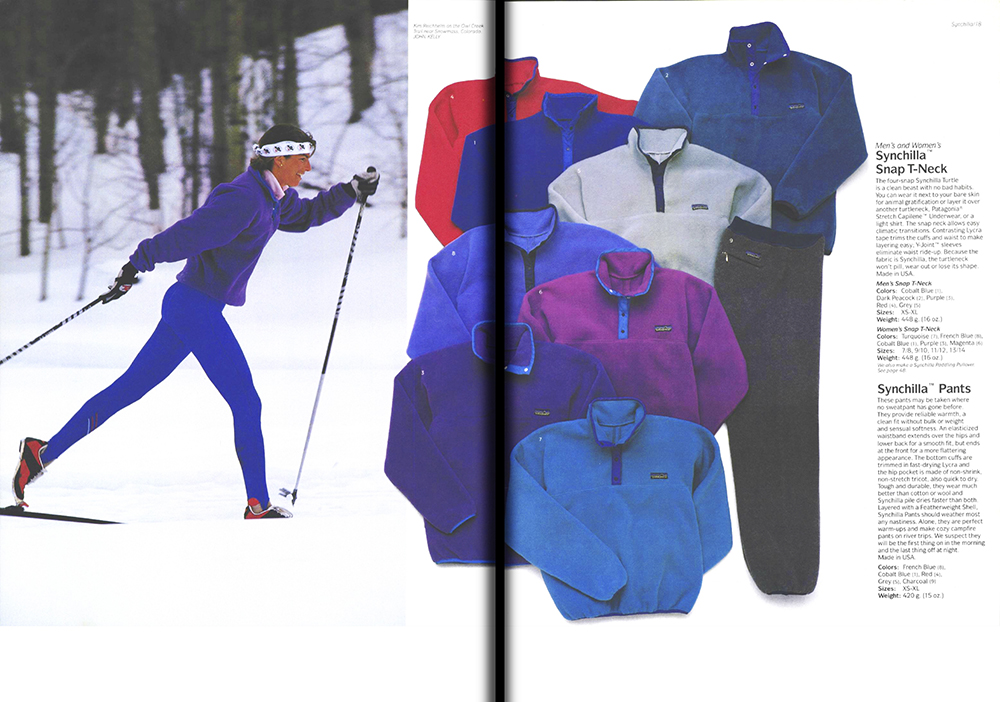 Some of the Cinchilla lineups had an orthodox open front, and there were pullover types other than the Snap T. However, it can be said that the matching of the design of the Snap T with the texture and coloring was excellent.

Of course, the lightness achieved by not using a zipper and the good storage capacity were also excellent elements of technical wear, but above all, its pop and stylish looks gained the support of many people, and the existence of this product made Patagonia what they are today.

Because people want to wear comfortable clothing at any time, Snap T has expanded its field of activity as functional daily wear, and even as technical wear for outdoor sports. Despite this the design has survived without changing its appearance. 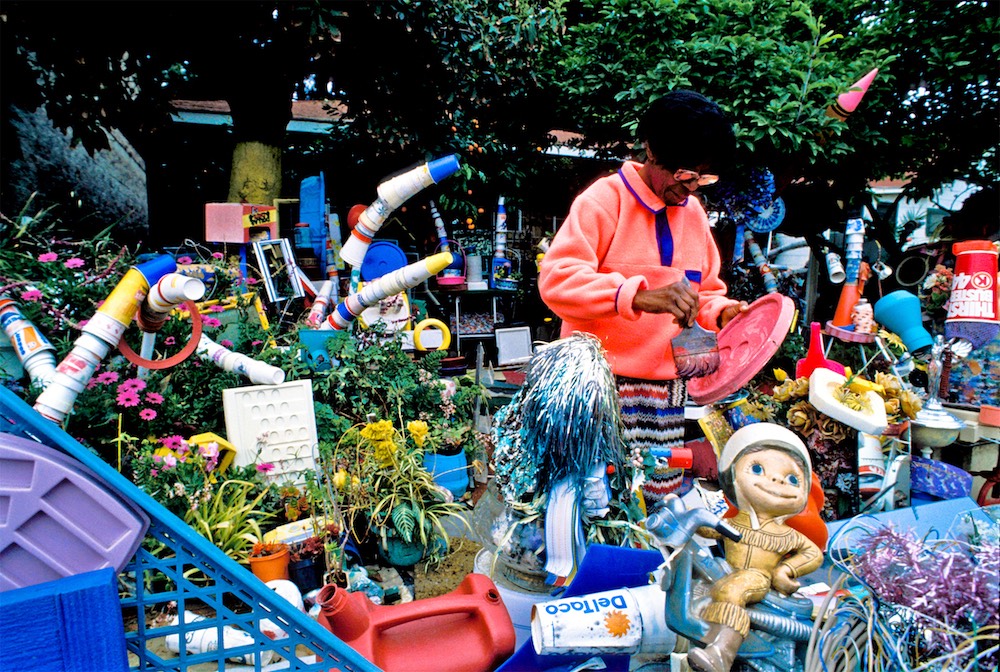 Snap T that evolves even if the design does not change.

The only change in the appearance of the standard Snap-T is the addition of a distinctive chest flap pocket since 1989. It wasn’t initially attached to the Lightweight Snap T, which was added in the ’90s (both now have pockets). 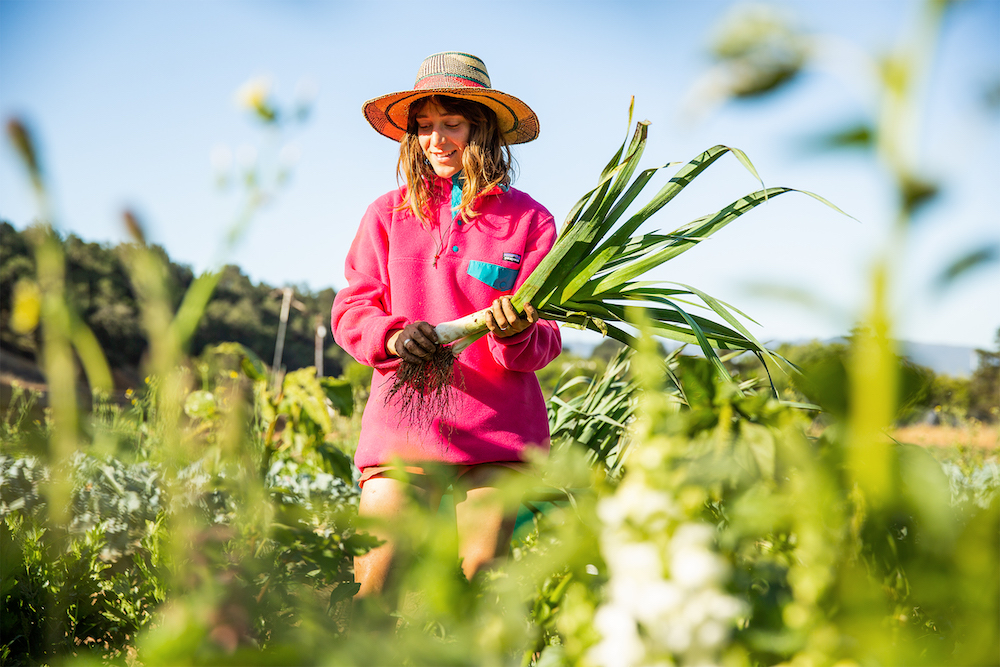 But to think the Snap T hasn’t evolved at all since then, is a mistake. In 1993, it was the first outdoor company to work on recycling by making fibers from collected PET bottles and making them into products, and from the following year, Snap T was also made from recycled materials.

After that, Patagonia promoted the use of recycled polyester, such as collecting fleece products, and now all the fleece used in the Snap T collection is 100% recycled material. More recently, they have been working on a Fair Trade Certified program to improve the working conditions for clothing workers.

It can be said that the Snap T has evolved into a product that is more environmentally friendly and people-friendly, without changing its appearance. 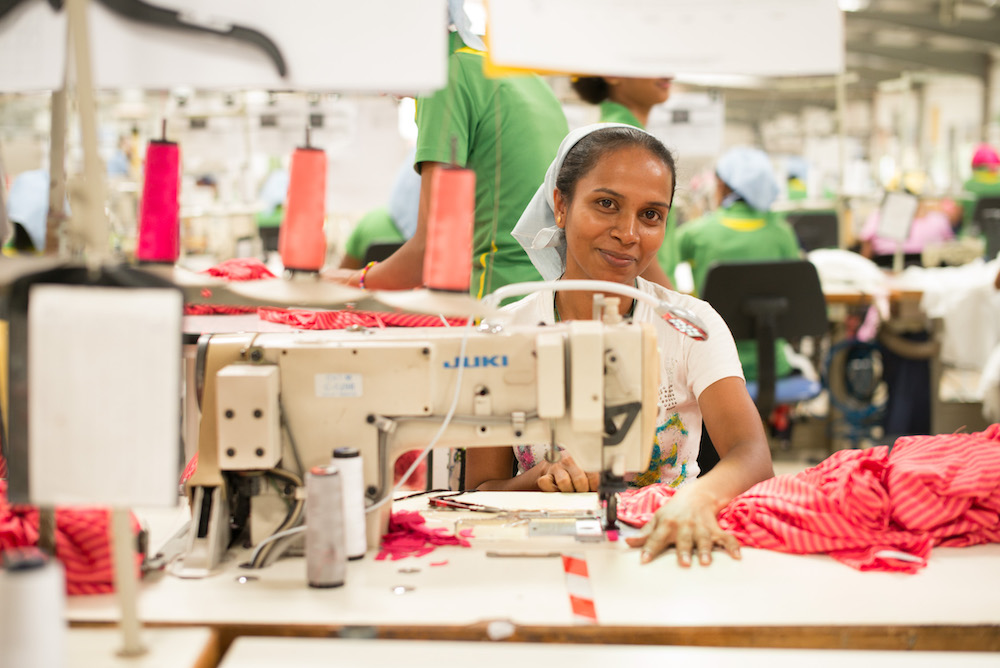 The charm of the Snap T talked about by outdoor enthusiasts who have been using the Snap T for many years.

Now, let’s talk about the charm of the Snap T over many years. Mr. Takatoshi Akutagawa, an expert of outdoor activities who is familiar with this series of articles in this magazine. 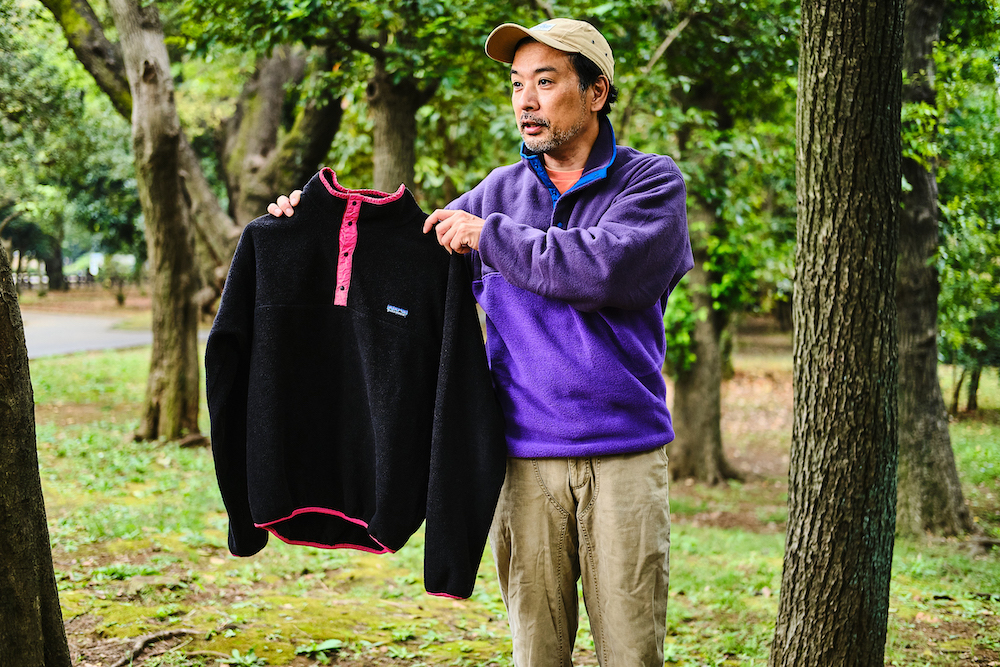 “I first learned about the existence of the Snap T around 1990. At that time, the first Patagonia store was just opened in Mejiro, and there was a slight Patagonia boom around me. Most people picked it up. It was the Snap T, which was relatively affordable and had a stylish design.

I was doing competitive skiing at the time, and sweaters were the norm when it came to winter innerwear, but I remember Patagonia’s Snap T spreading quickly. It’s light and warm, and it dries quickly even when it gets wet, which is a big difference from a sweater. It felt like the clothes of the future had arrived.

It’s also suitable for skiers that need to lean forward because there is no zipper on the front and it does not hinder the movement of the body. However, I first bought the Snap T in the mid-’90s. That is the first type of pink trimming on this black body. I bought it used at a flea market in the United States.

I’ve seen Snap T in various ways, but I’ve never seen this color. Black x pink is like ’50s, isn’t it? So at first I was attracted to the color and bought it, but when I actually tried wearing it, it’s really easy to wear it not only for sports but also for everyday use.

Wearing it like a sweatshirt, it’s light and warm. It dries quickly even after washing. Also, if you use it as an inner when you wear a coat etc., it’s also great. That’s why I bought more old and new, and I still wear about 6 variations of it. ” 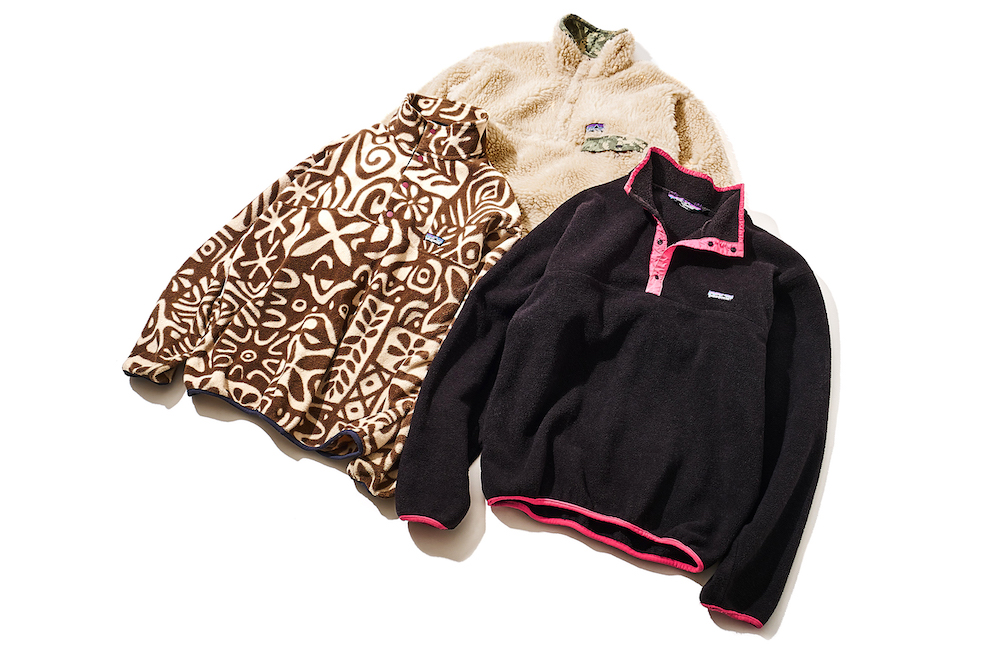 These three snap Ts are often worn these days. I also love the hooded version that came out for the first time a few years ago, but in the sense that I’ve been using it for many years, these are the three main outfits.

The ethnic pattern is the lightweight type of the ’90s, and at that time, various patterns were available and all of them were attractive. Because it is thin, it is often used for layering.

Another long-haired model was released in 2007 as a special model outside the standard catalog. This is a rare model with a digital camouflage pattern on one side. It’s so warm that it’s completely usable as a winter outerwear. 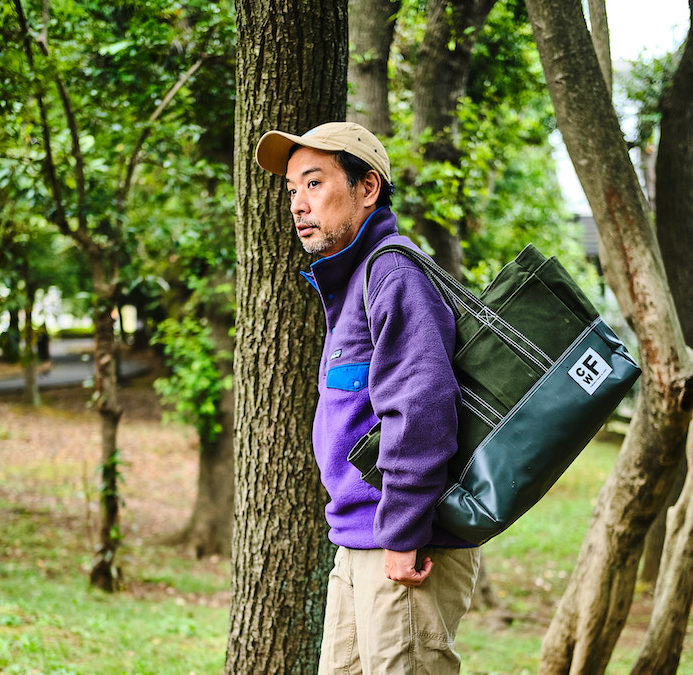 Anyway, the Snap T has a long model life, and there are so many types that I can’t grasp the whole picture, so it’s fun to dig up past models. Patagonia itself recommends the distribution of used clothing from the perspective of recycling (laughs).

However, the new model has a more comfortable fleece and is more resistant to washing, so I feel that it has evolved. In terms of practicality, a new model is of course good. I think each new and old one has its own charm. ” 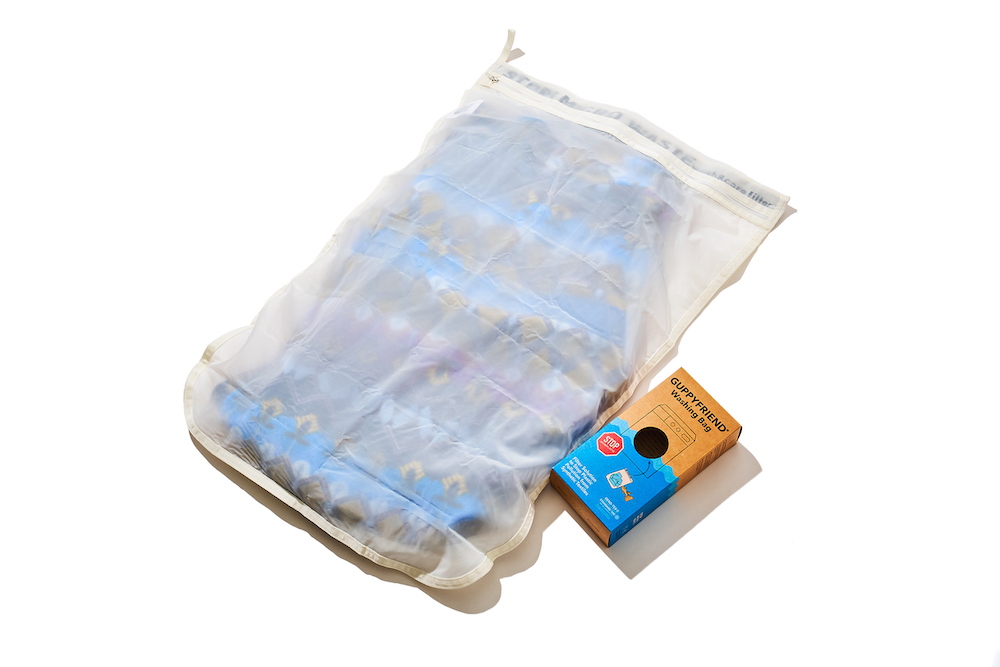 Speaking of fleece laundry, this Guppy Friend Washing Bag (¥ 4070) is a must-try. Patagonia’s value is that fleeces such as the Snap T can be washed in this soft net to prevent damage to the fabric, extend its lifespan, and prevent fallen fibers from flowing along with drainage into rivers and the ocean. It’s a product that connects with this philosophy. This is exactly two birds with one stone because it protects the environment and prevents the fleece from becoming stiff. If you are a fleece enthusiast, please get one to use with your laundry. 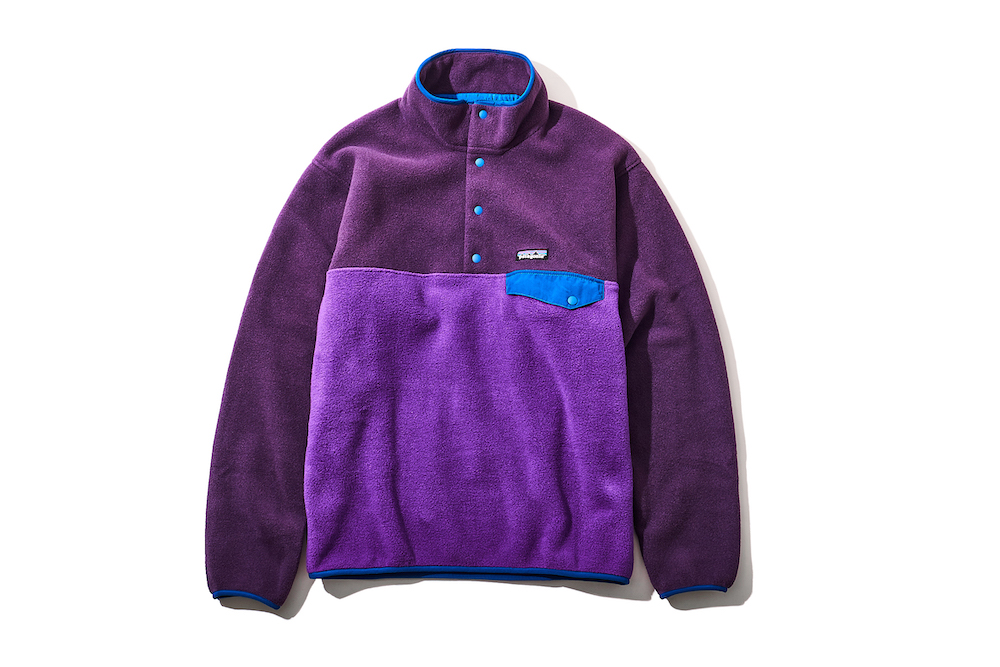 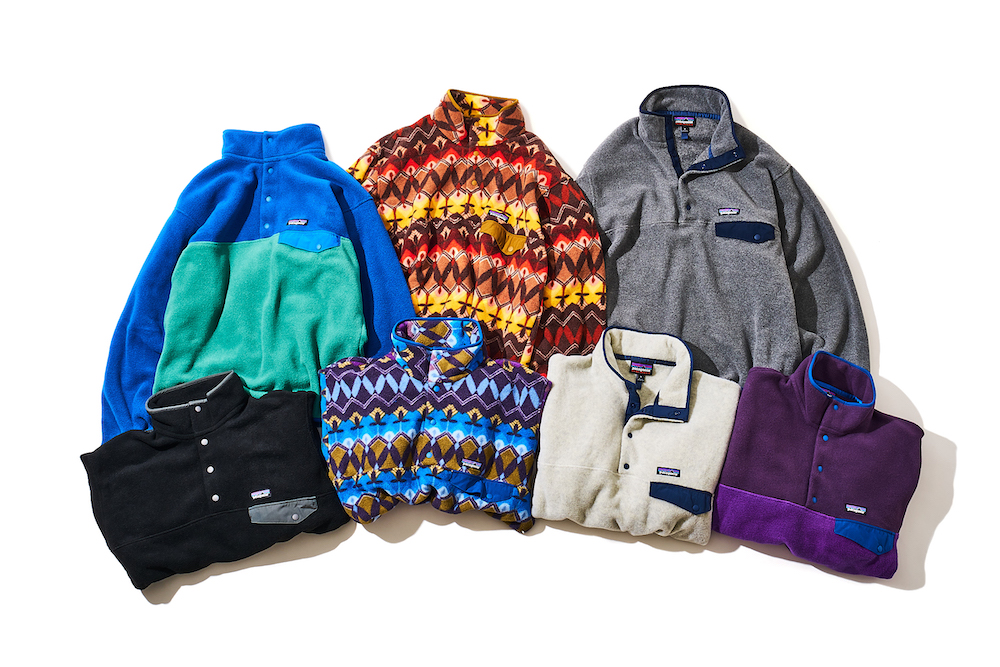 The pullover style with lightweight resin snap buttons, the piping on the cuffs and hem, and the chest pocket with flaps keep the basic elements that make up the snap T, but make sure to evolve in a number of ways. Here is the latest collection of Patagonia Snap T’s. There are many variations such as bicolor and full patterns.

From now on, the Snap T will reach the milestones of 40 and 50 years without changing the basic design while expanding the variations. It can be said that this is a permanent staple that represents Patagonia.