Interview with Hiroyuki Ueda (EXALER Slackline Professionals）at the GO OUT CAMP. The Japanese slackline scene, where the World Cup winners will also be bown!

FEATURE
3 years ago
by GO OUT

This video is a recording of slack line pro, Itsuki Hosoe, at the Go Out Jamboree in 2019. Just like watching a tight rope walker at a circus, deftly walking along a tricky rope suspended between two trees gives the impression of floating. Slack line originated as a training exercise for mountain climbers but has now developed into a fully fledged sport.

At the Go Out Camp it was developed as an activity from early on before it became recognized worldwide as a sport. EXALER slack line professional Ueda has been supporting use since the beginning.

He is a truly committed to the sport who performs himself, manages and trains others and is active in spreading the popularity of the sport via various events and media performances. He will of course be participating at the annual Go Out Camp Vol.15 from 27th-29th September this year.

Hiroyuki Ueda   Representative of Exaler. Originally a photographer, he came to the realization that actions can be used to communicate with those around you in the same way that photos can express emotion. Rather than photos he sought a more direct way of connecting with others and so founded Exaler on October 1st 2012.

Whether you are a pro slack liner or just a beginner the most important thing is to relax. 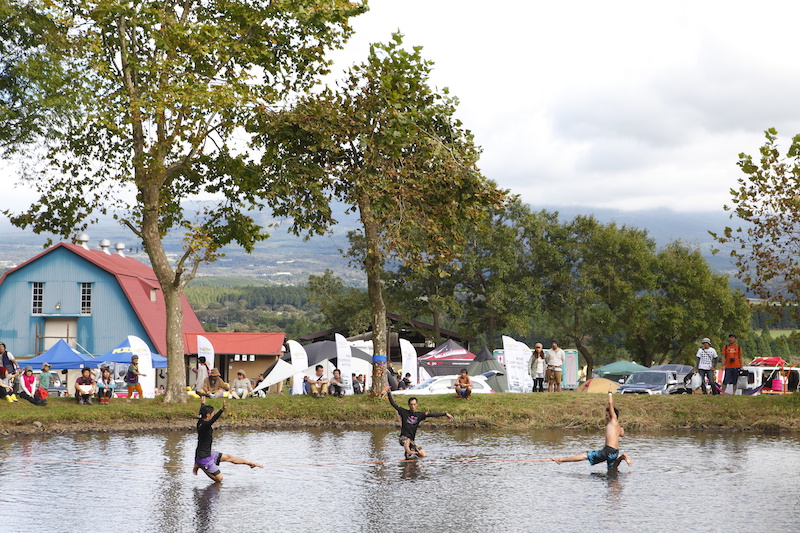 -How did you first get involved in slacklining?

I always enjoyed cooking outdoors while camping but other than that I was just sleeping and relaxing so I wanted to look for some other activity to take part in while camping. Around that time I often came across bouldering articles on the web from people like Dean Potter who would climb to the top of the rocks and then slackline without any safety lines which shocked me a bit. That’s when I started looking into slacklining and decided to try and spread it through Japan as it wasn’t well known at that point.

Minor slacklining is a new sport that can be easily enjoyed by anyone. If you become more advanced then you can perform superhuman feats such as flying on the line, walking long distances and slacklining in high places. However the most important thing for both beginners and advanced practitioners is to relax. It is easy to get carried away in your excitement while walking the line but at the same time you need to remain calm. So we reversed the word relax and added an E at the front to create the name EXALER.

First arriving in Japan via the USA and Europe and continues to spread throughout the world. 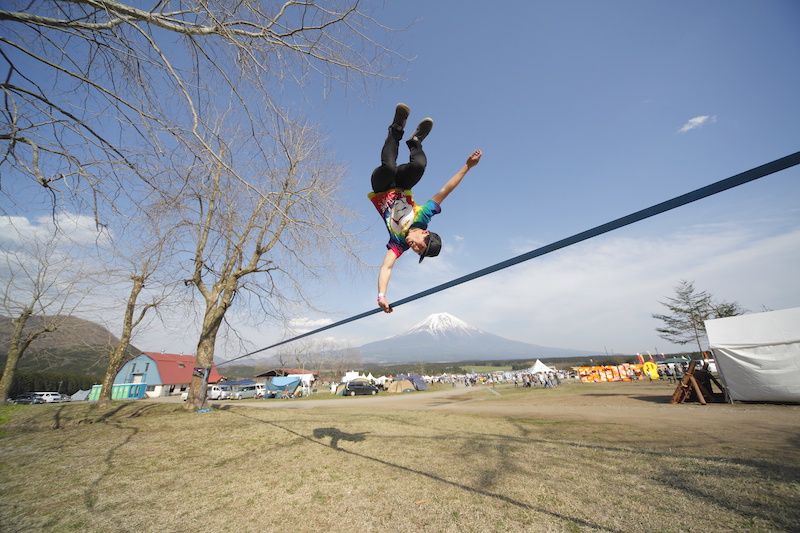 -Could you tell us a bit about the history of slackline?

The term slackline was born in the 1980’s when groups of climbers gather in Yosemite Park USA and tied mountain climbing tools between trees and started walking on them. It has its roots in play rather than sport but European climbers also saw this and brought it back to there hometowns and from 2007 various slackline brands were born in Europe. After that,  specialized equipment began circulating in Japan and at the same time slacklining gained further traction in Europe and back in its home of the USA.

-So can you tell us how competitive slacklining works?

receives coverage on TV and SNS media in Japan is the acrobatic style of trick lining. Competitors compete for points by performing various acrobatic feats without falling from the line during a set time limit. The long line is the simplest in terms of contents, where you compete for time by quickly crossing from start to finish. Unlike traditional tightrope you have to keep your balance using only your own body. As the name already suggests, high line is a competition that takes long distances at higher locations. Some slackline competitions mix different styles like tricking and long lines.

-So tell us about the growth of the global slacklining scene?

said to be enjoyed by more than 3 million enthusiasts in 80 countries around the world. The biggest market for it is in the USA however and that is characterized by many professional competitors making appearances in the entertainment world. The X Games have of course been held there many times in the past so the passion for extreme sports is exciting over there. Moab, Utah has become a Mecca for highline lovers from around the world who gather to enjoy and compete in the valley.

The Japanese scene is reaching maturity with the current World Cup winners present. 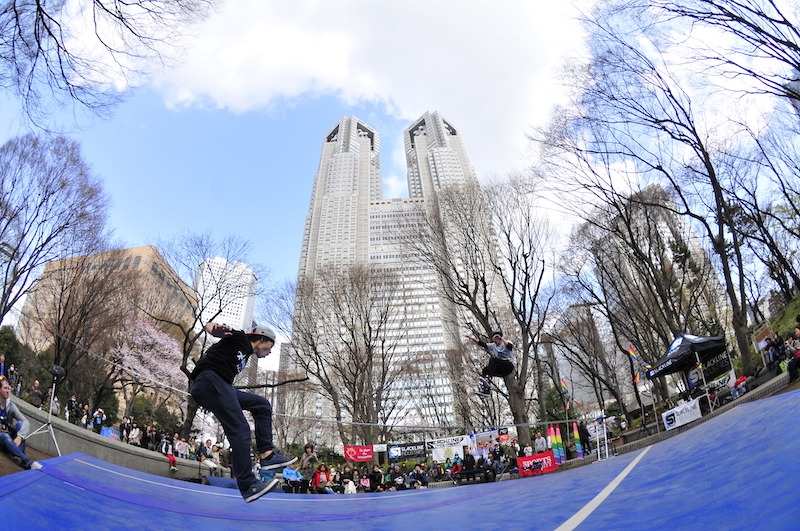 -Are Japanese competitors active in the global scene?

Itsuki Hosoe from Aki prefecture has competed all over the world and at the age of only 18 he won the World Cup in 2017. After graduating from high school he continues to compete both domestically and abroad.

-What does the slackline scene look like in Japan?

-What do you think about the future developments of slackline?

Little by little, as the number of dedicated parks and indoor gyms increases, I think that the competitors will reach a more professional level and also be able to transition into secondary positions as coaches and managers which will help to develop the next generation of talent. Although the current balance of performers to trainers is not quite enough as it is a young sport in Japan I think we are getting close to this higher level of performance and exposure.

Even beginners can enjoy a successful experience! At the Go Out Camp, grab a one day pass and try for yourself! 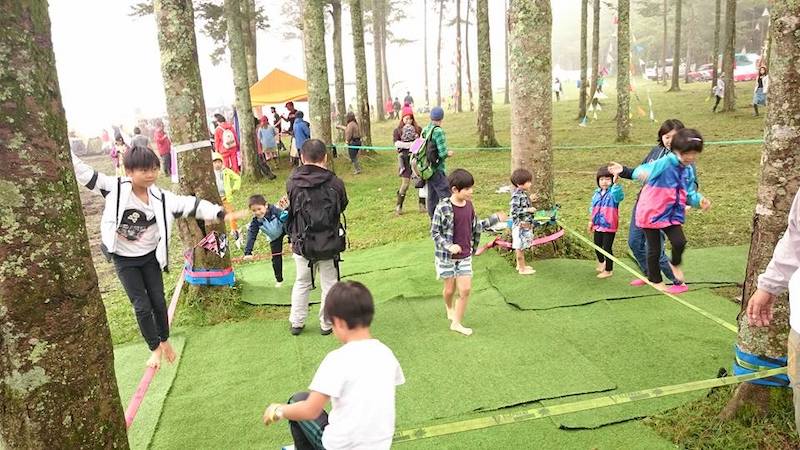 There will be many people active in competitions such as the previously mentioned Hosoe Itsuki. Competitors that regularly appear on TV and other forms of media will be showing up so if you have good timing you might be able to see their great skills live in person.

Hosoe Itsuki  20 years old from Aichi Prefecture. He has competed both domestically and overseas with great results. For further details check out his official profile.

Comment from Itsuki Hosoe: It’s really great fun to be able to do slacklining with Mt Fuji in the background. It’s obviously exciting to give a performance at a big event like the Go Out Camp. I think it’s still a relatively niche sport, so I would be really happy if we can encourage some new fans. Of course I’m also looking forward to the overall experience at the Go Out Camp.

-What kind of experience can people expect at the Go Out Camp?

We have a corner for first timers to have a trial. The slack line is stretch out very low to the ground so that beginners can enjoy themselves easily and safely. Lots of the children love to take pictures of the favorite performers and they can even get autographs.

-Do you have anything you want to do at the Go Out Camp in the future?

There are customers who participate every time so I want to try and arrange some mini competitions. There is a large pond at Fuji which beautifully reflects the scenery and I think trying a high line performance across that would be great fun!

-Can people begin slacklining after trying it out after the Go Out Camp?

It is very difficult to do it by yourself, but as we will teach you the basics, once you have mastered this you can easily be moved onto more challenging slacklining. Additionally since we are issuing one day unlimited passes at the Go Out Camp, if you arrive early in the morning you can get lots of initial experience and practice. Of course you can enter and re-enter as many times as you like so you can enjoy other aspects of the camp experience.

To spread the joy of slacklining we will do anything so please feel free to make individual requests.