How to guide on how to effectively and stylishly use a tarp.

GEAR
3 years ago
by GO OUT 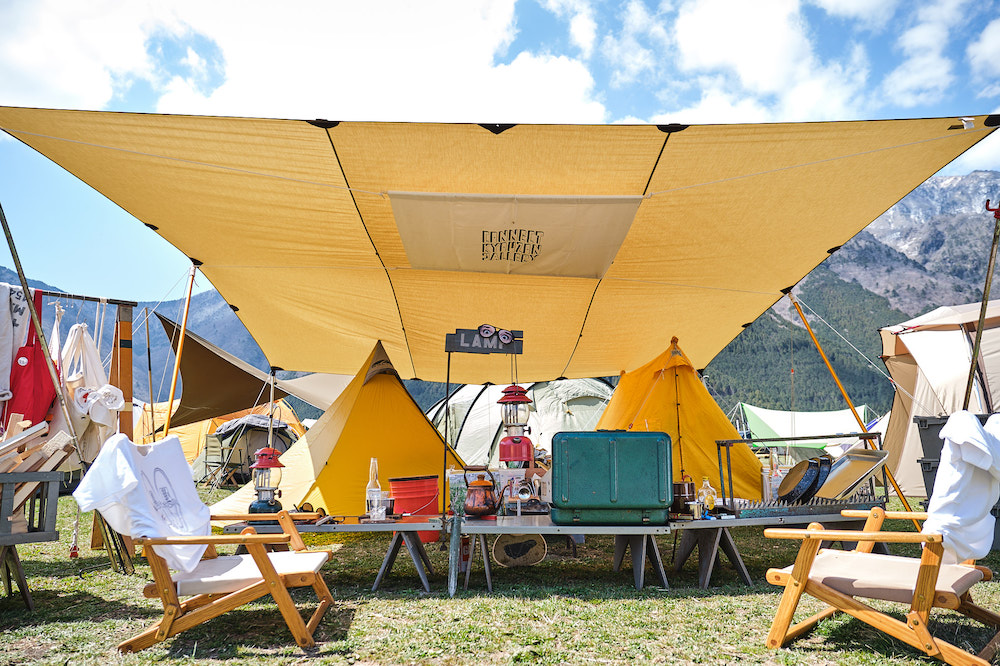 Tarp is a must have camping essential to help create private spaces and protect from the elements. There are many types of tarp available on the market such as hexagonal, rectangular and pentagonal shapes. There are also many different ways to set up and apply tarp to maximize their use.

At the GO OUT JAMBOREE in April we took a look at different campsites and how they made cool use of their tarps.

Using a tall pole, create a feeling of openness! 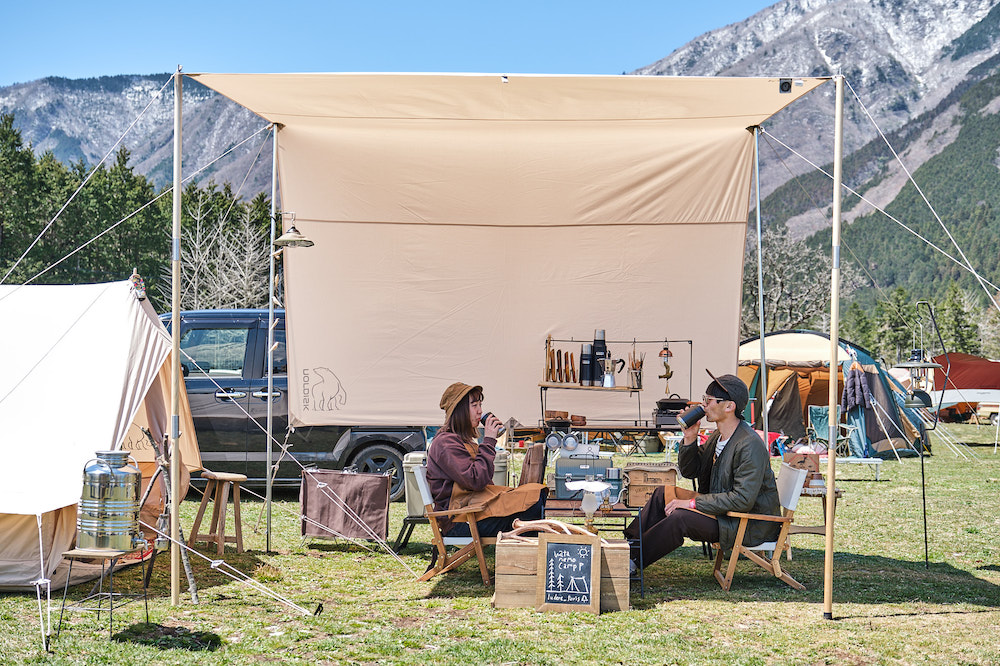 This tent site uses four vertical poles with the tarp draping on one side to create a privacy screen. It also has a naturalistic style using cotton curtains and wooden furniture.

The 2 front poles are 240cm and the 2 rear poles are 250cm, giving the tarp a high ceiling and a spacious living area. 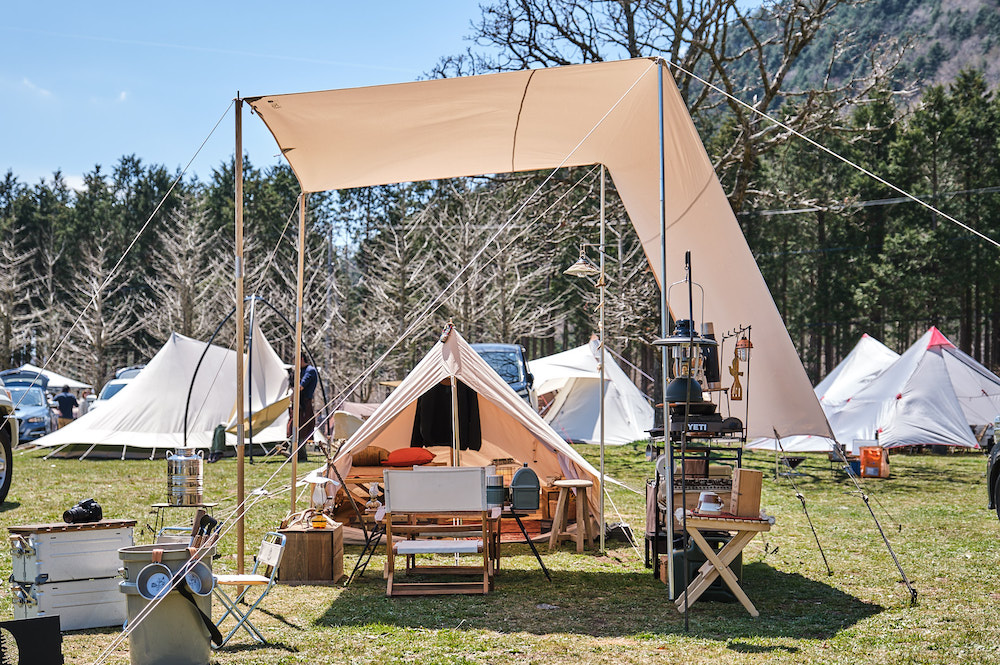 “Setting up the tarp vertically helps to create a spacious high ceiling while also create a private area for use as a kitchen. I feel like it makes our camp site unique and stand out”. @watanemo_.camp 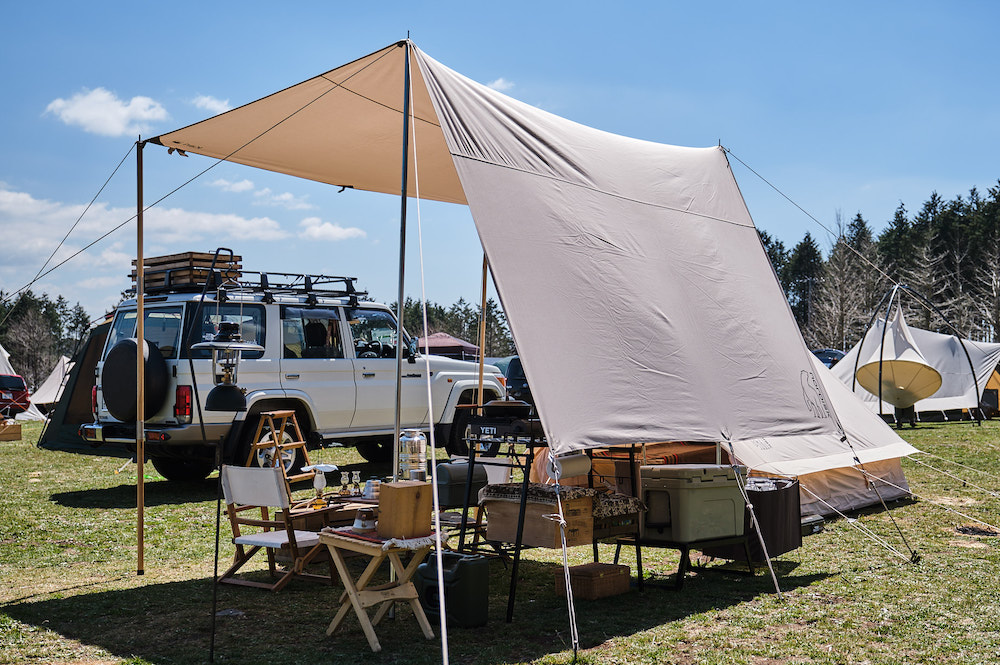 To set up the tarp, insert poles into the two corners and eyelets on both sides of the tarp and then fix them with guidelines. On the otherside, pull the guide line directly through the eyelet and peg down to finish.

It is better to keep a slant rather than being completely straight so that rain water can roll off. This is why the heights of the rear and front poles are slightly altered.

A fully open tent style with no feeling of oppression 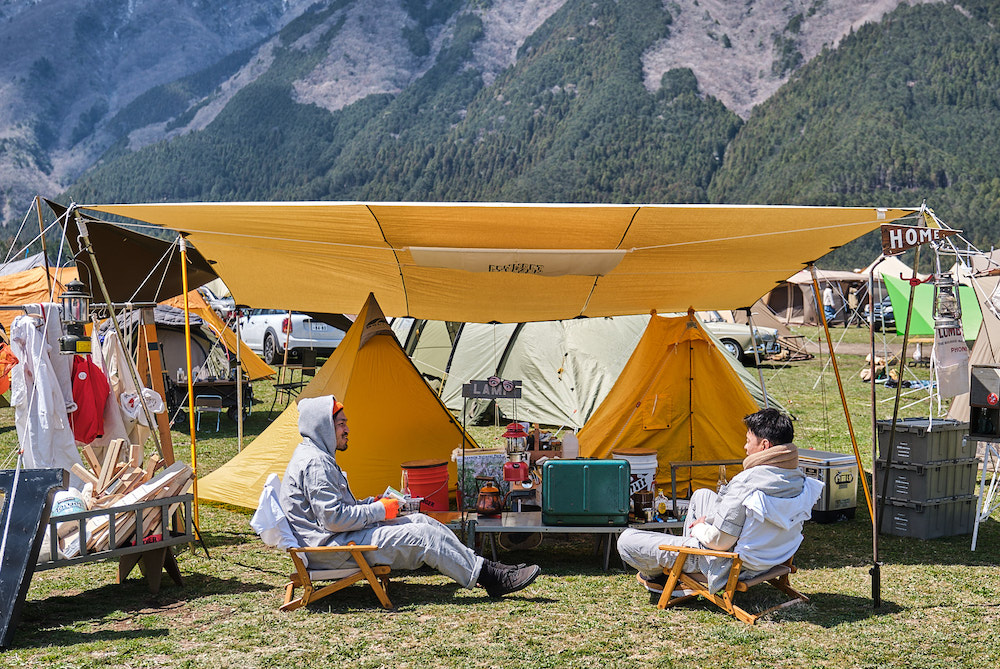 This fully open style utilizes 6 poles that stretch the tarp in an almost horizontal shape and bright yellow tents to create a fresh camp site. Even when positioning 2 tents under the tarp there is no feeling of oppression or claustrophobia. 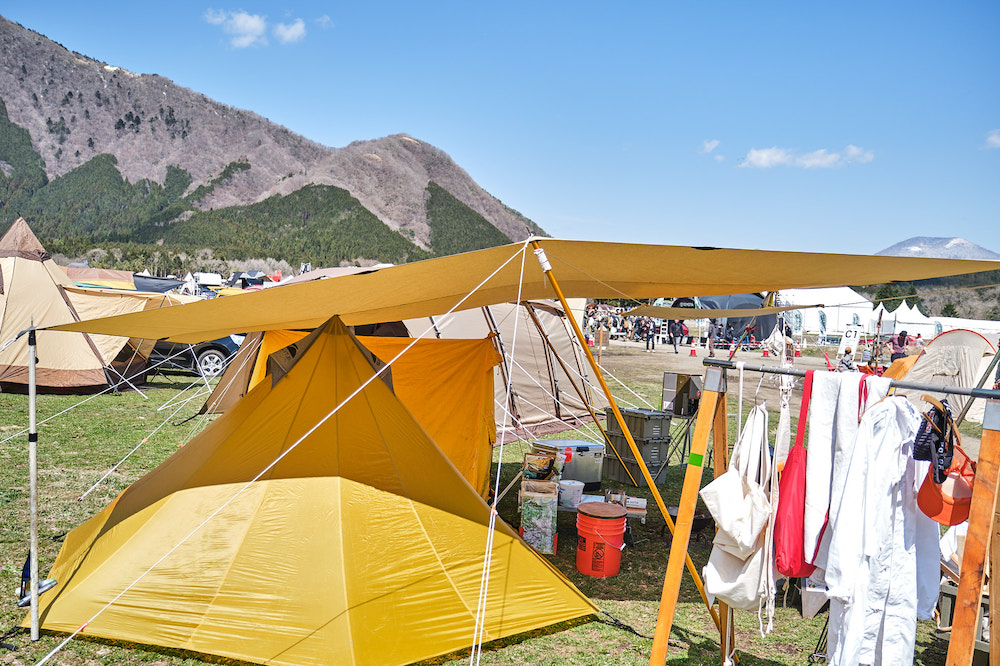 The tent under tarp style is not only for preventing rain but also for providing higher wind resistance and stability.

“It’s currently almost horizontal so the tarp will catch rainfall but its also ok to slope it slightly to allow the water to run off”. To achieve this the ten pole lengths can easily be adjusted. 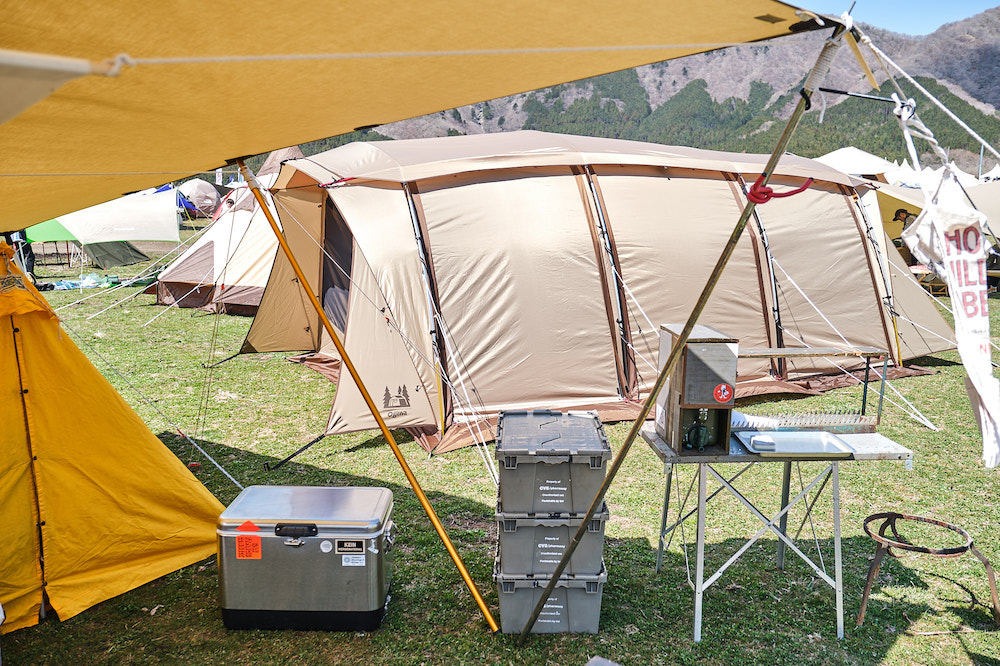 Of the 6 poles used, the front 4 have been placed in a v shape to apply tension to the whole tarp and by pulling the guidelines taught, excellent stability and appearance have been achieved. 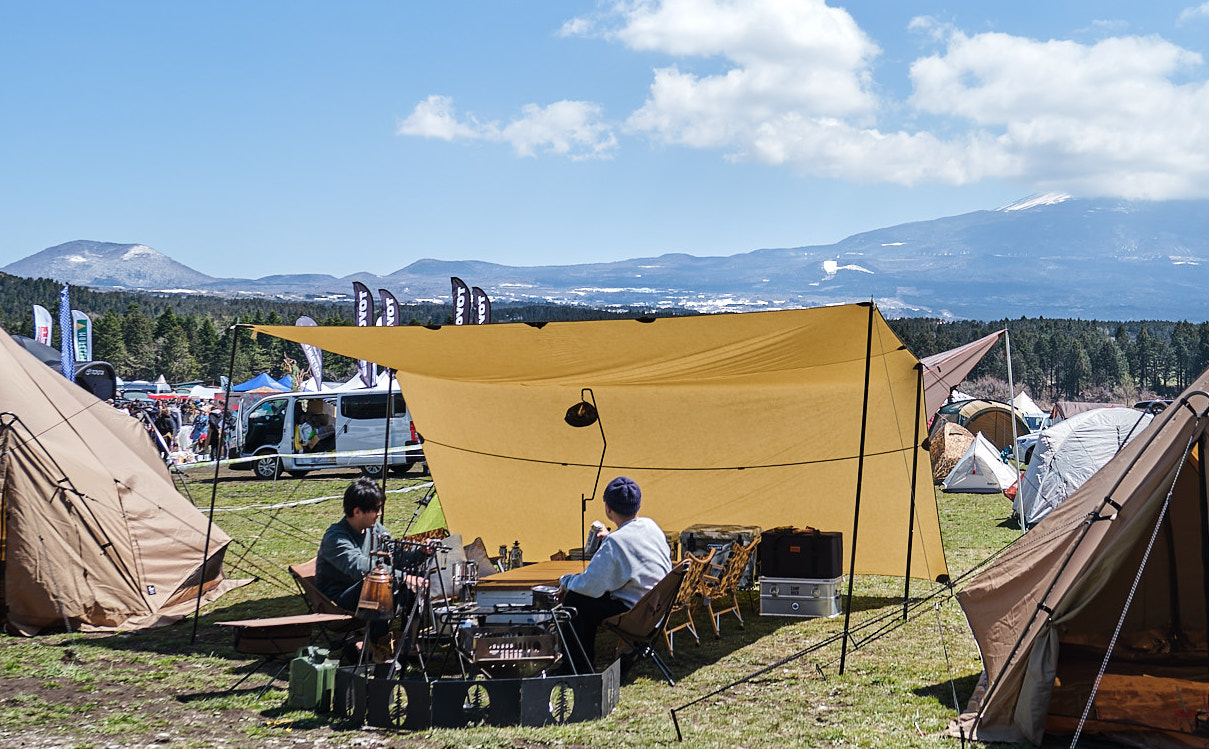 The @eboshit group has two families camping together with a Tatonka tarp set up to create a shared living space.

With a vertical style that gently slopes on one side to create some privacy, this is a compact yet private use of tarp. 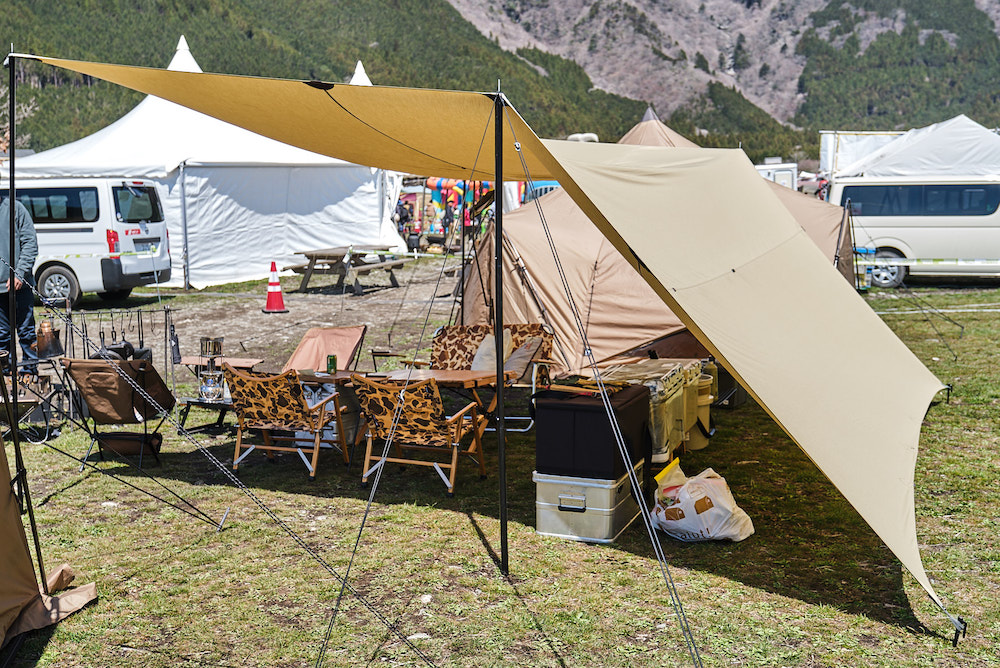 “I really wanted to have an open site to have a clear view of Mt. Fuji but due to the large number of people around and the wind we used it as a windshield and for privacy”.

In addition to varying the heights of the front and rear poles, the side walls are angled at 40 degrees to make it easy to protect against wind and wainwater. 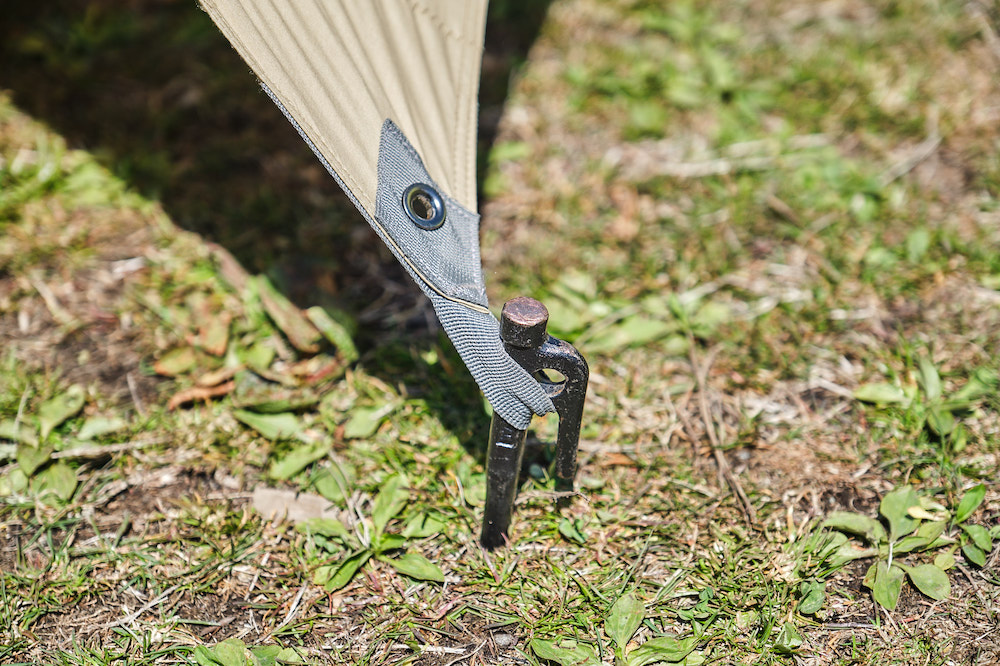 The fall poles are not particularly high, so you can peg one side down directly from the strap without the use of guidelines creating a wall like effect. 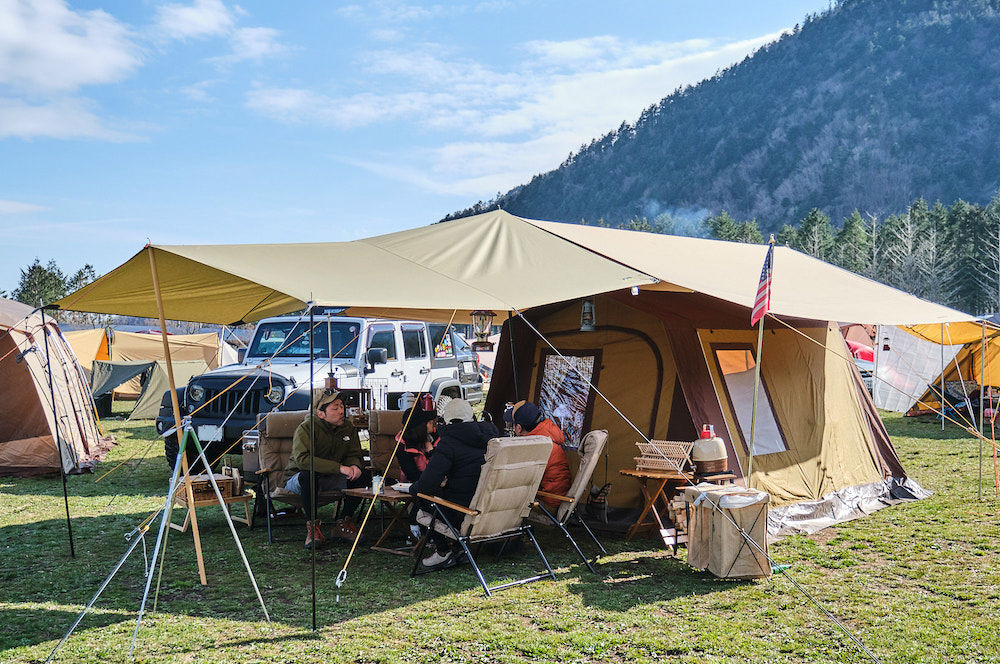 This tent site for 4 people has combined 2 tarps together to make a stylish and spacious camp. The smaller Tatonka tarp is used to create a living room while the larger Vision Peaks is used as a rain protection cover like an ICI sports lodge style tent. 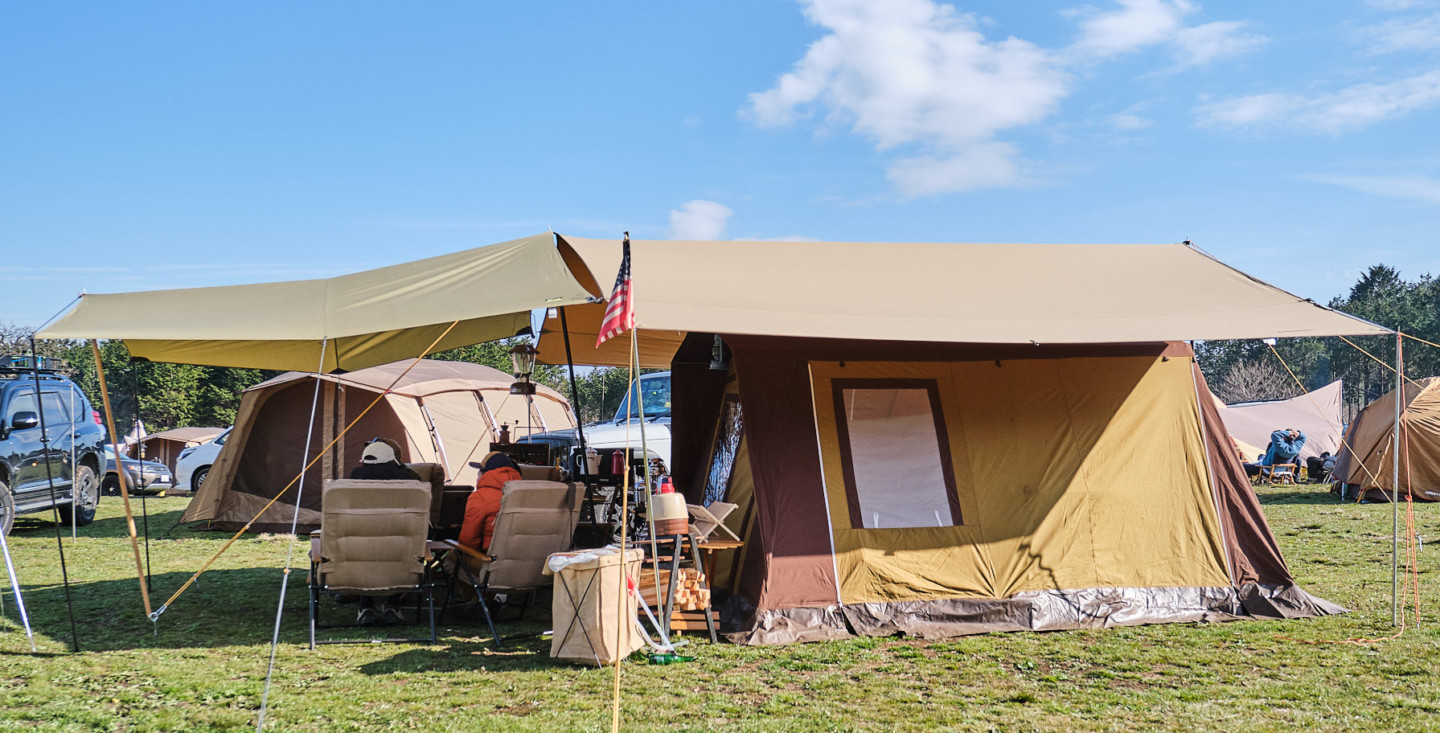 “We originally brought the Tatonka as a spare but due to the rain and snow so we tried to connect it and luckily the width of the eyelets fitted perfectly!”

The guideline that supports the larger Vision Peaks tarp passes through the living space as the Tatonka tarp was added later as a weather countermeasure. 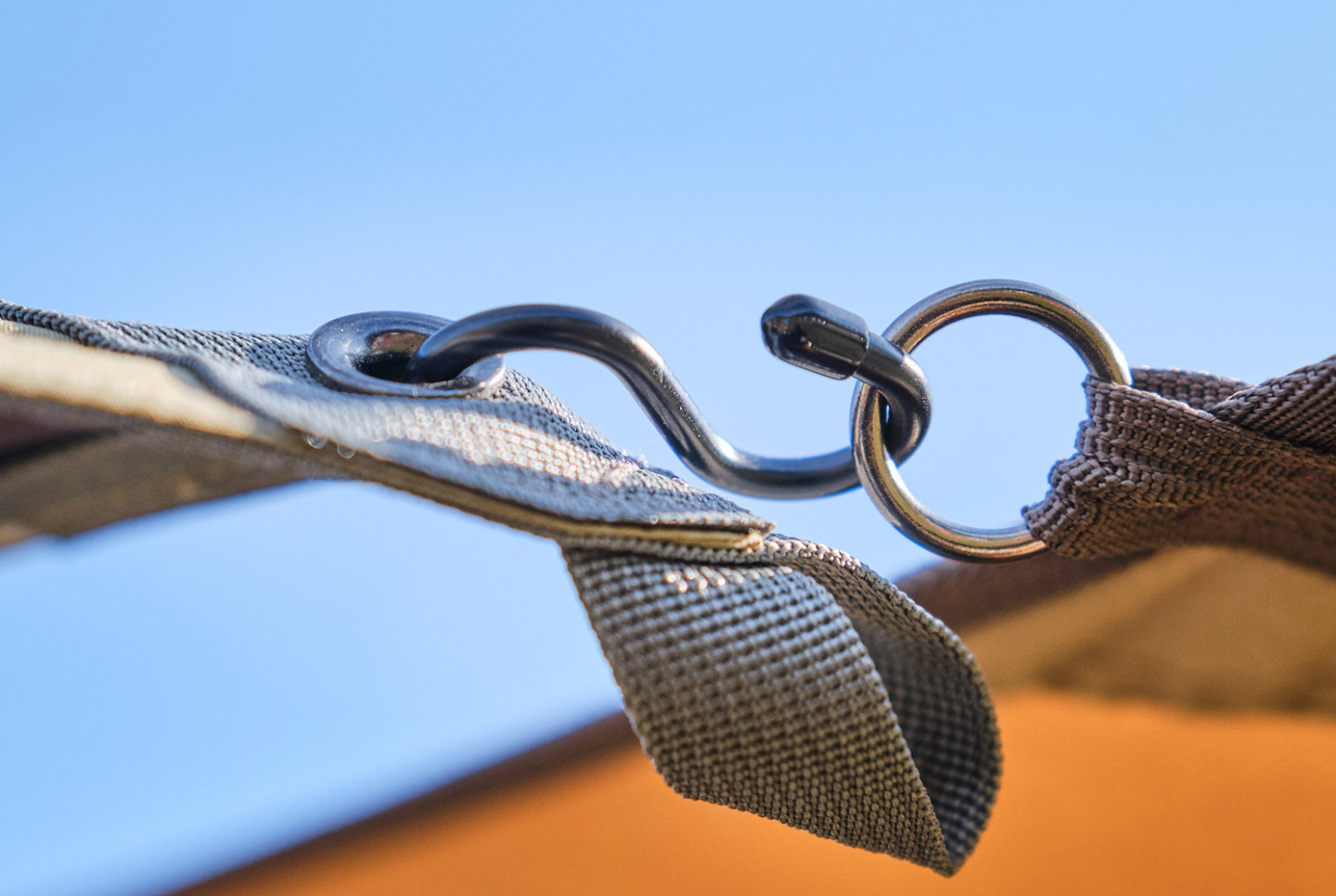 Also of note is how they have fixed the tarp using an S hook which happened to be a perfect Cinderella style fit. The guideline passing through the living area doesn’t seem ideal but as soon as we asked about this he said “If you’re prepared then you can be ready for any eventuality” as he nonchalantly removed his hat.

Advanced technique using a side awning. 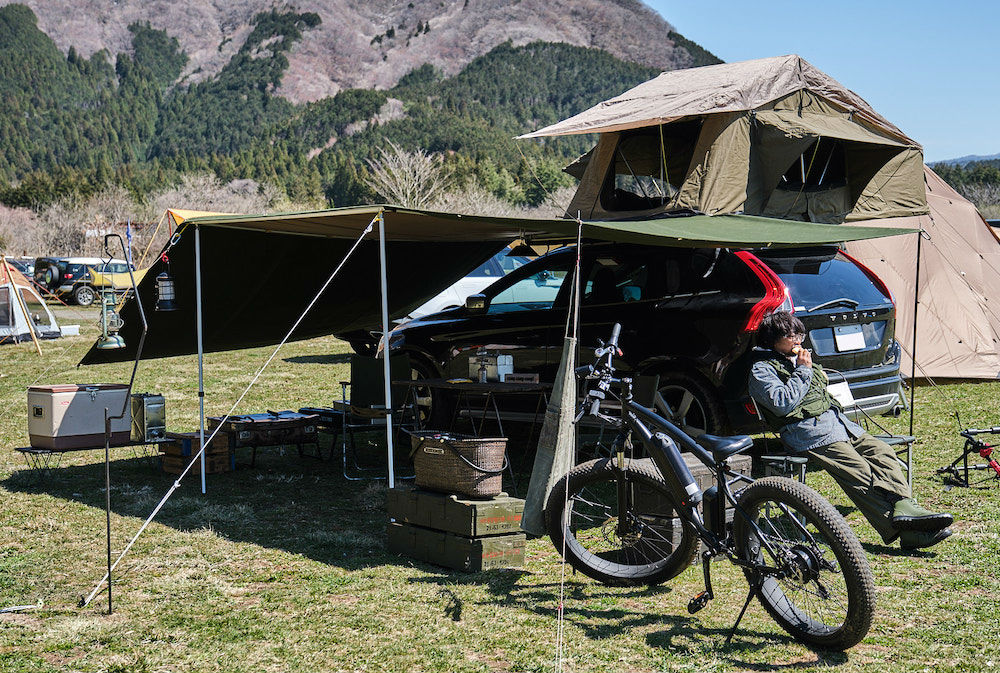 @et.quart_15 has a military style camp site which features the car as the centre point with a rooftop tent and is a great example of how to apply an advanced tarp using a side awning. 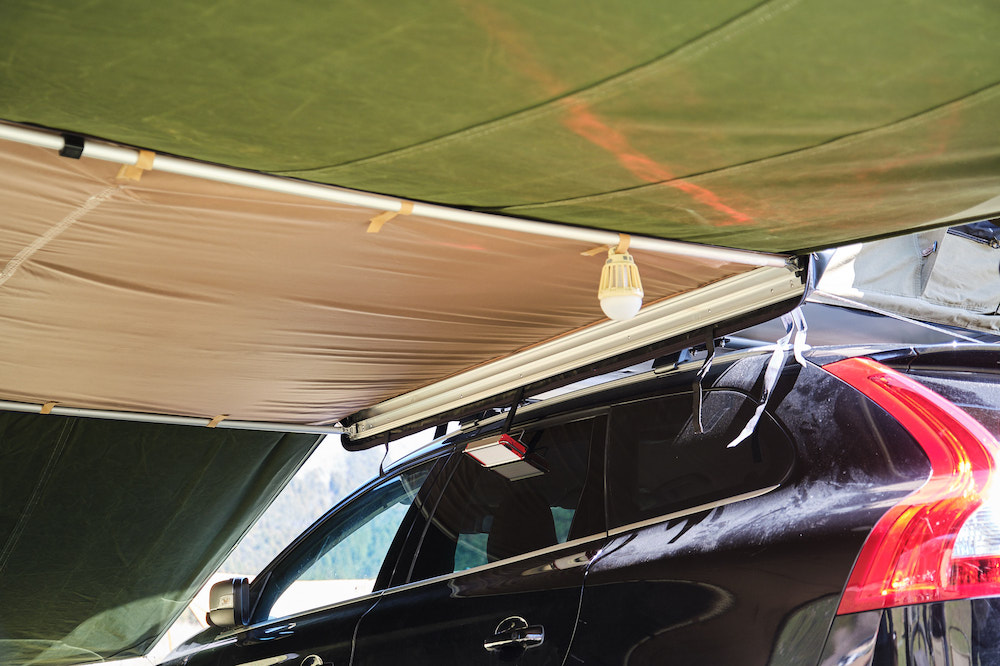 By expanding the side awning that is installed into the vehicle and deploying a truck hood that has great affinity with military style gear. The truck hood has been custom made and measures 2m x 5m so that it fits the length of the awning.

“I just put it over the awning, so it’s not really that hard to set up. When it gets cold the truck hood arrangement helps to shield from it and provide protection. 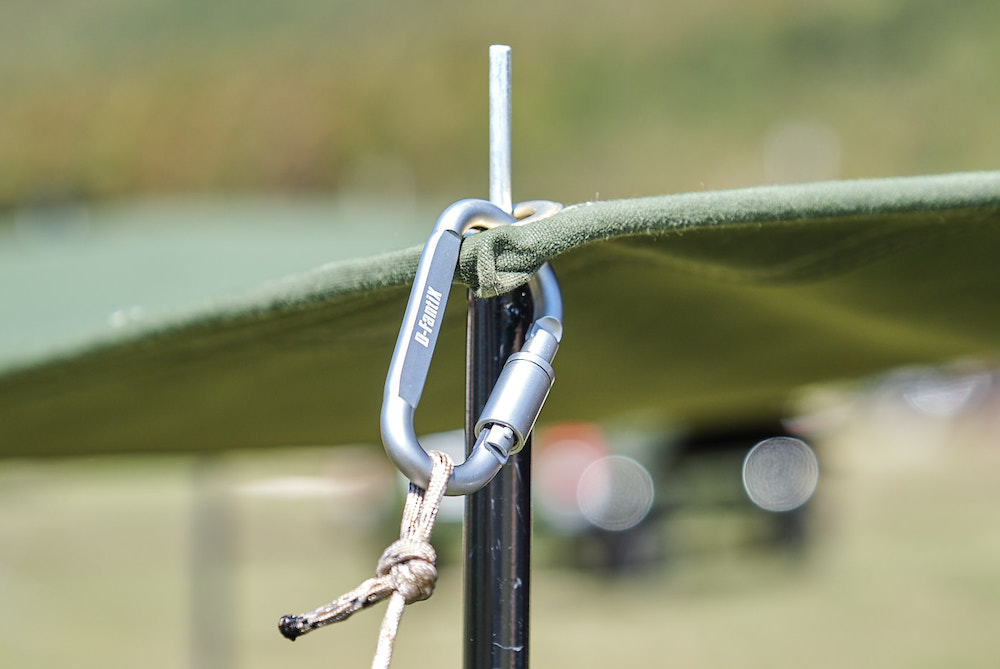 Master how to arrange your tarp to make the most of your camping trips!

Campy site space is often limited depending on the size and number of people attending so securing a living space to relax in is an important topic for all campers. In preparation for the upcoming camping and outdoor season, why not study up on how to make the most of a fashionable and functional tarp?

Tatonka tarps have been spoken about a lot during this article. This is because the shape is simple and there are many eyelets making it easy to attach to poles and arrange into the shape you want.