The item on everyone’s lips even before release! We tried out Balmuda’s first Bluetooth speaker.

TECH
3 years ago
by GO OUT 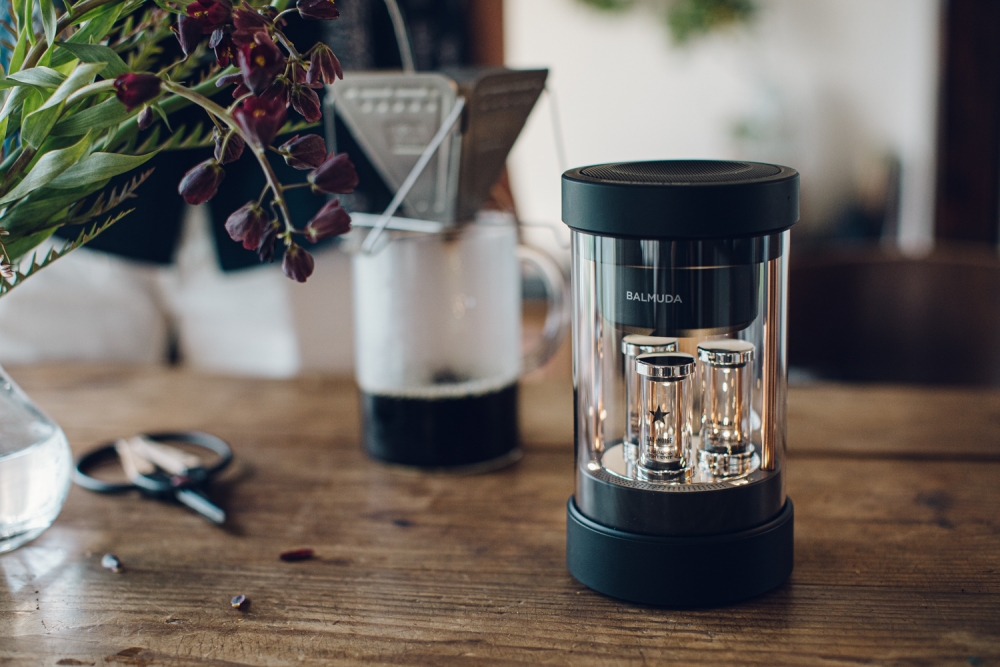 Outdoor-flavored wireless speakers were announced by “BALMUDA,” which sends out stylish and practical home appliances that can seamlessly match a fashionable interior.

The LED lantern “BALMUDA The Lantern,” which was released last year and has received a lot of praise from outdoors lovers holds a special place in my memory, but the new speaker also received a great response when I introduced it in an article the other day.

With the current global situation and extra time spent at home I decided to try out its features at home in a lot more detail.

An innovative speaker in which light dances to the sound. 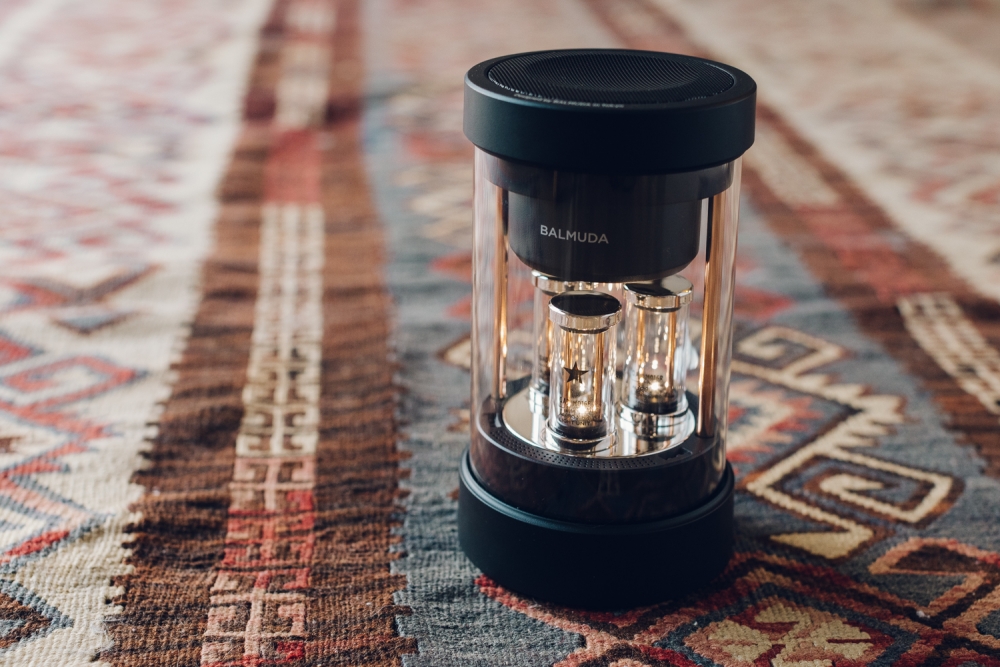 First of all, I would like to briefly review the speakers.

The main feature of this speaker is the three central LED units with LiveLight function. You can choose a song that suits your mood or from the three patterns of light “beat,” “ambient,” and “candle.”

Also, as a speaker, of course, I’m impressed with the sound quality. The sealed organic glass has a structure that creates a stereoscopic and realistic sound while maintaining the original balance of the song. What’s more, it’s a nice omnidirectional speaker that’s stylish to look at and listen to because it’s rechargeable and can be taken outside and used.

Sophisticated design that is pleasing to the eye. 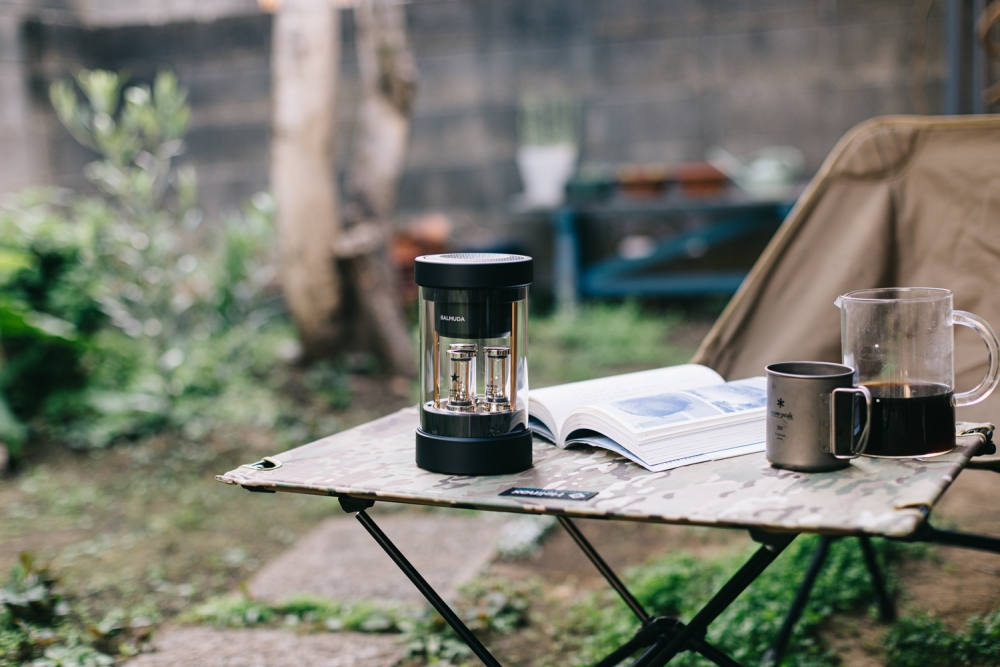 The first thing that attracts me is the innovative and minimal design that is typical of Balmuda.

The Speaker looks like an LED lantern. It will play a strong role in styling the space not only indoors but also in the garden and while traveling. 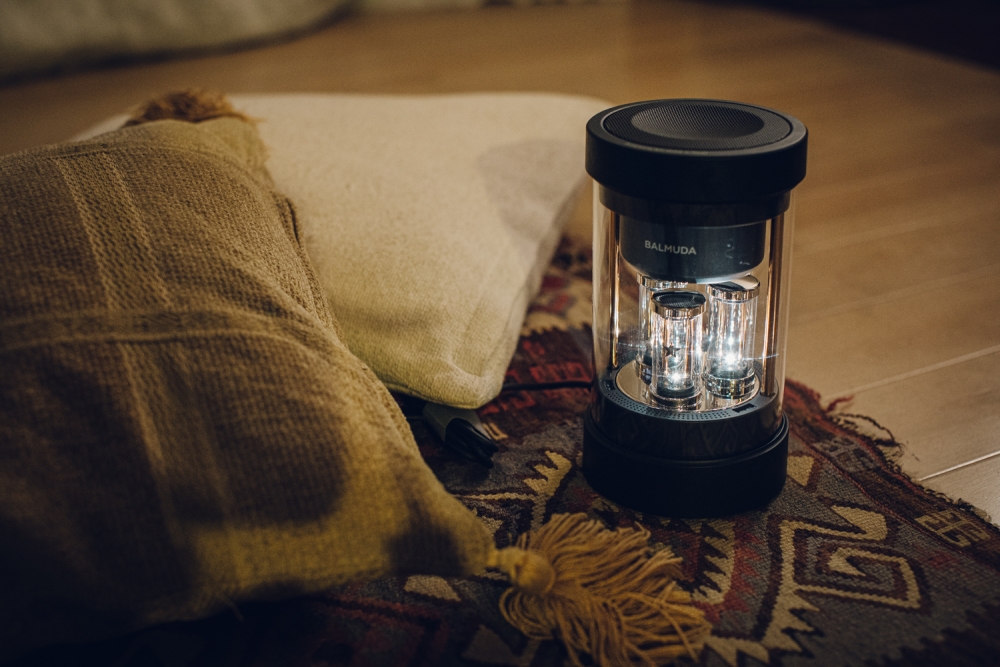 The notable LiveLight function converts sound into the brilliance of light at a speed of 0.004 seconds using a unique algorithm. The lights dancing to the music is as fun as watching a bonfire that you will never get tired of. Surrounded by the light that illuminates the darkness and the music, you can create a special atmosphere even at home.

A simple design that can be used the moment you take it out of the box. 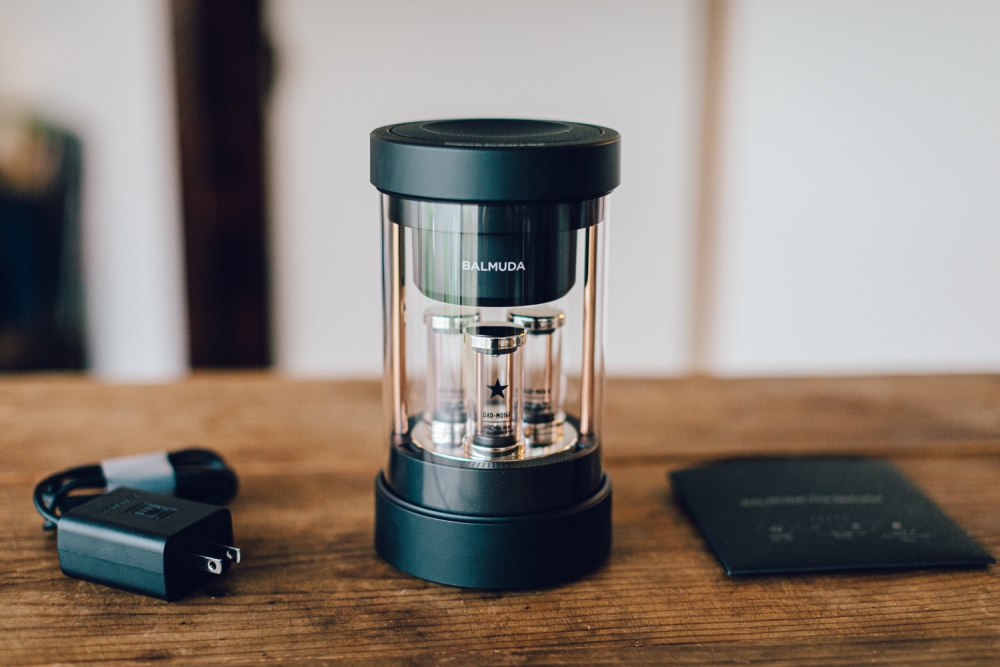 Only three items are included: the speaker, charger, and instructions. For those readers who are not good at setting up new devices, having few parts is one of the reassuring points. 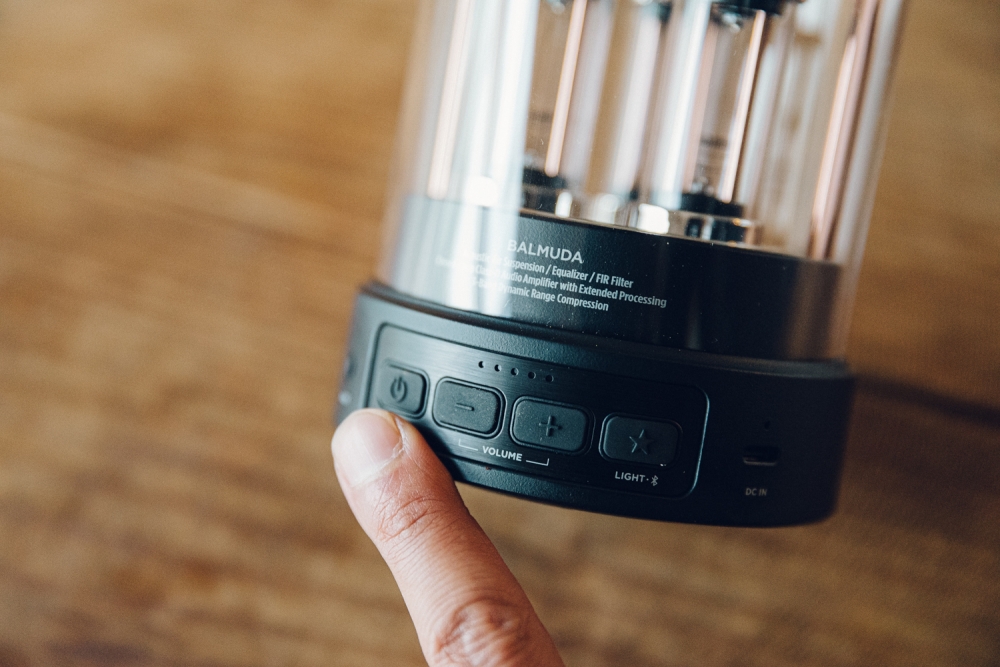 The buttons at the bottom of the back of the main unit are also very simple. There are few switches, like the console of an old car. When you press the power button on the far left, you’ll hear the usual, comfortable sound effects of Balmuda products. 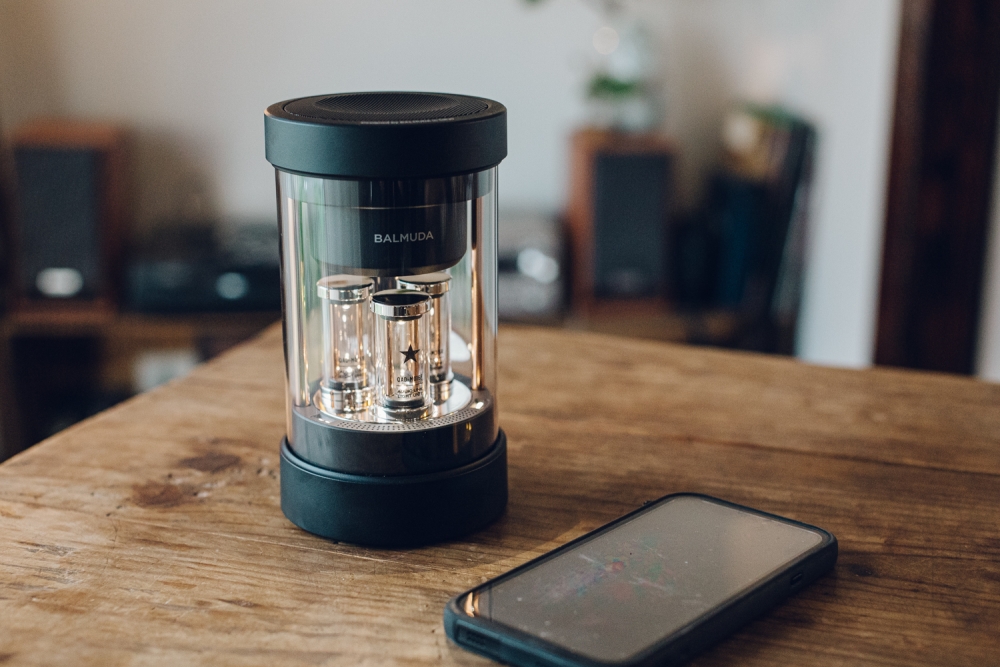 After that, you can enjoy music just by connecting to your smartphone or computer via Bluetooth.

The Bluetooth connection weakens if there are obstacles or if the distance is too far, but I put the speaker on the first floor of my home and took my smartphone to the second floor, and the music was flowing without problems.

In addition to Bluetooth, it has an external input terminal of 3.5mm mini jack, so it also supports AUX input.

Original design that spreads sound in all directions. 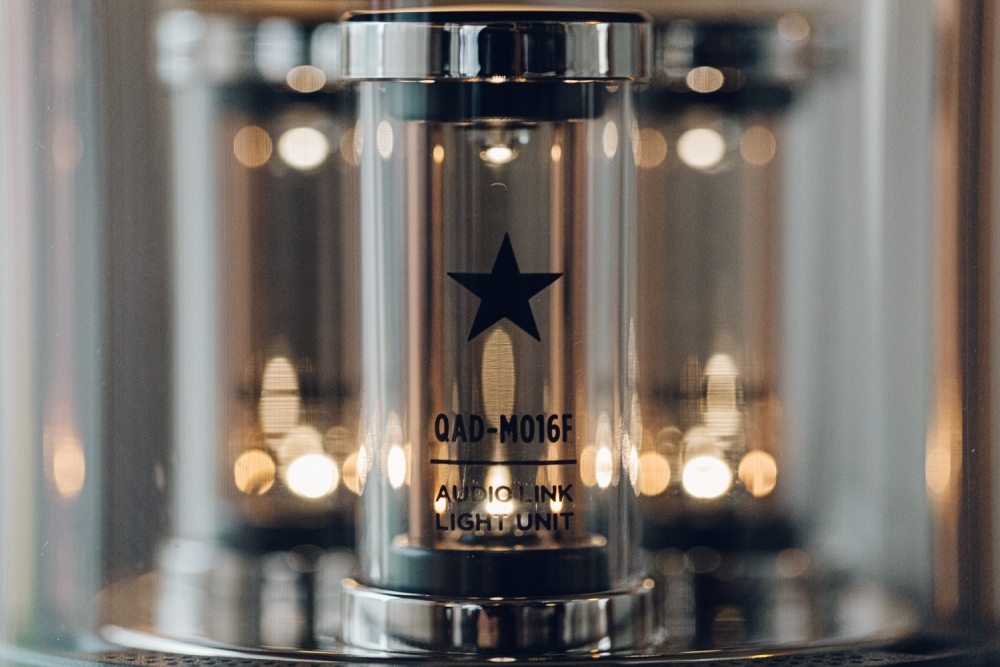 What’s great about this wireless speaker is that it pays close attention to sound as well as design. Equipped with a unique drive unit that creates a three-dimensional sound image in a closed type enclosure that clears the outline of the sound. 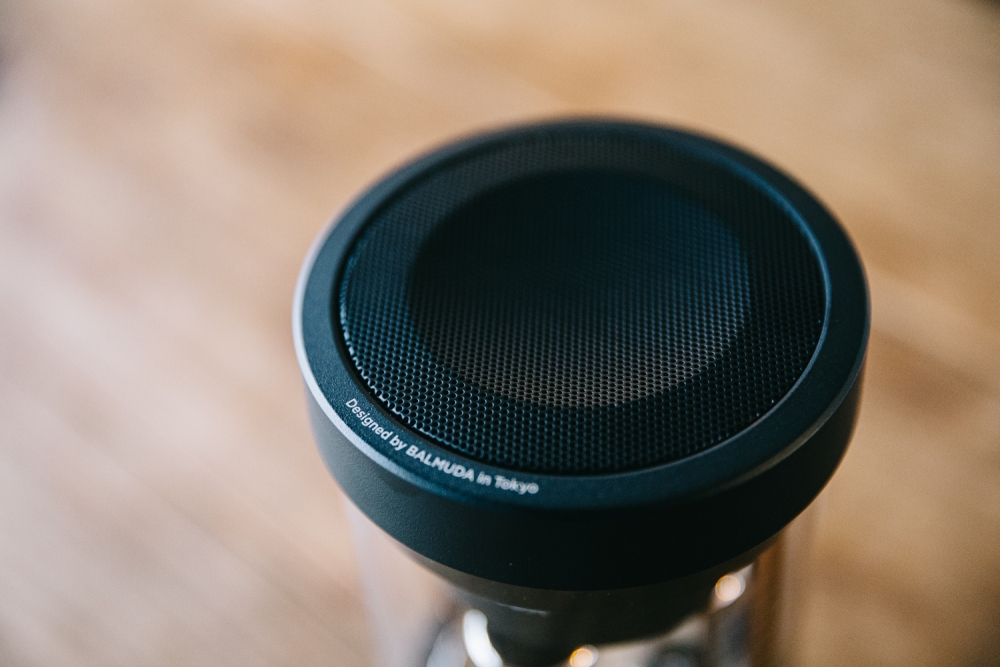 Bass sounds from below, treble from above, vocals in front of your eyes. You can hear its sound quality in every facet. The vertically designed 77mm full-range speaker gives you the same high-quality sound no matter where you are or where you put it.

The fact that you don’t have to worry about speaker positioning is a great advantage when using it at home or while traveling.

Can be carried with a rechargeable battery 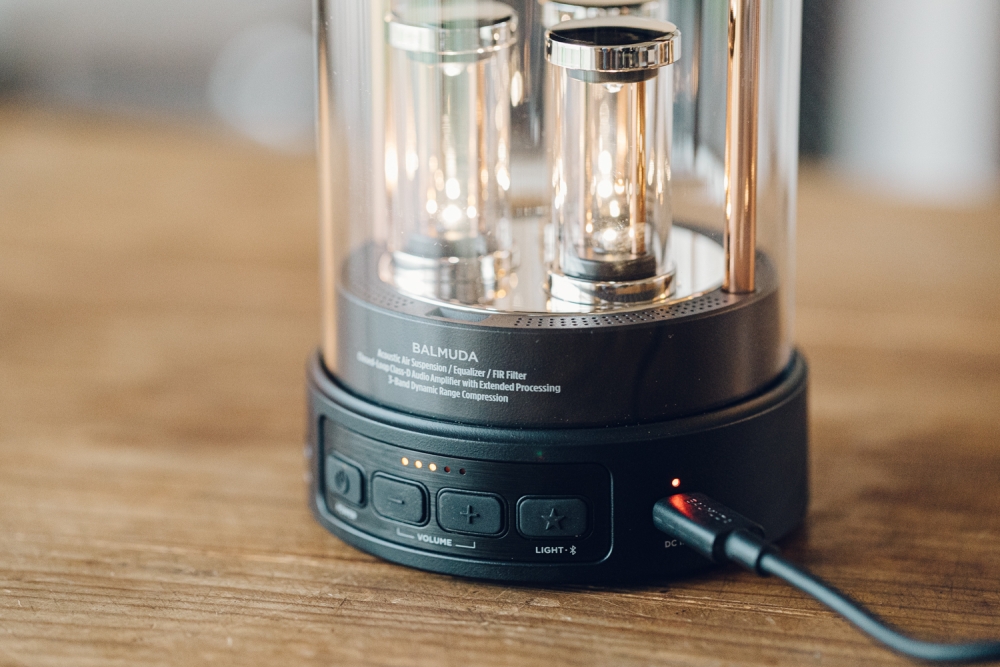 When you’re using it and it’s running out of charge, the lamp at the top of the charger will flash to let you know. It can be fully charged in about 2.5 hours using the included charger. The battery can be used continuously for about 7 hours, so it seems that it will be fully useable even during a one-night trip. 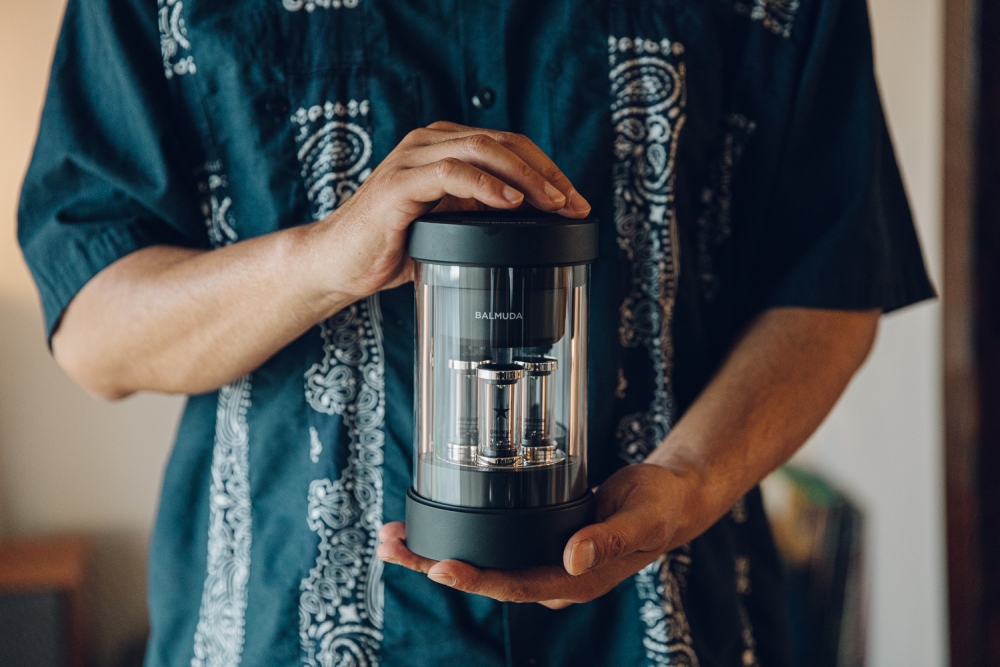 The size is relatively compact for this spec, and the weight is about 1kg. However, since there is no so-called storage case other than the box in which the main body is placed at the time of purchase, it is necessary to look for a storage case with cushioning material that matches the size when taking it outside. 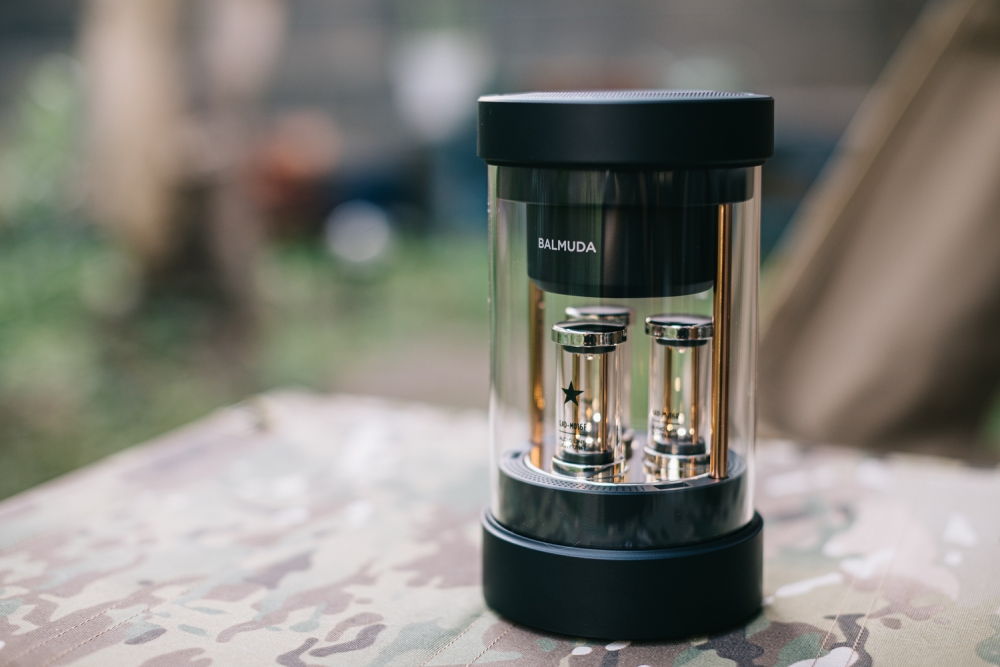 Also, be careful of rain when used in the garden or outside as it is not waterproof. The operating temperature range is 0℃ to 40℃, so please refrain from using it in extremely cold or hot environments, or take precautions against cold weather.

A unique speaker that combines design and specs, such as a lantern-like appearance, a LiveLight function with 3 patterns to choose from, and a clear and deep sound quality that spreads in all directions.

The Speaker is currently accepting reservations at the balmuda official website, home electronics mass retailers and major e-commerce sites. It is said that it will be shipped sequentially from around the middle of June, but if you are interested in the extremely popular Balmuda, early reservation is recommended!