The long-awaited resurrection of MOSS’s artistic tents and tarps has finally been unveiled!

TENT
2 years ago
by GO OUT

The legendary tent brand “MOSS TENTS” has become a hot topic among savvy campers after achieving the long-awaited revival in 2020.

The tents and tarps that will be revived were supposed to be unveiled at “TOKYO OUTDOOR WEEKEND 2020”, which was scheduled to be held this spring, but it was postponed. Finally, the collection was unveiled at The Ritz-Carlton, in Nikko on November 9th. 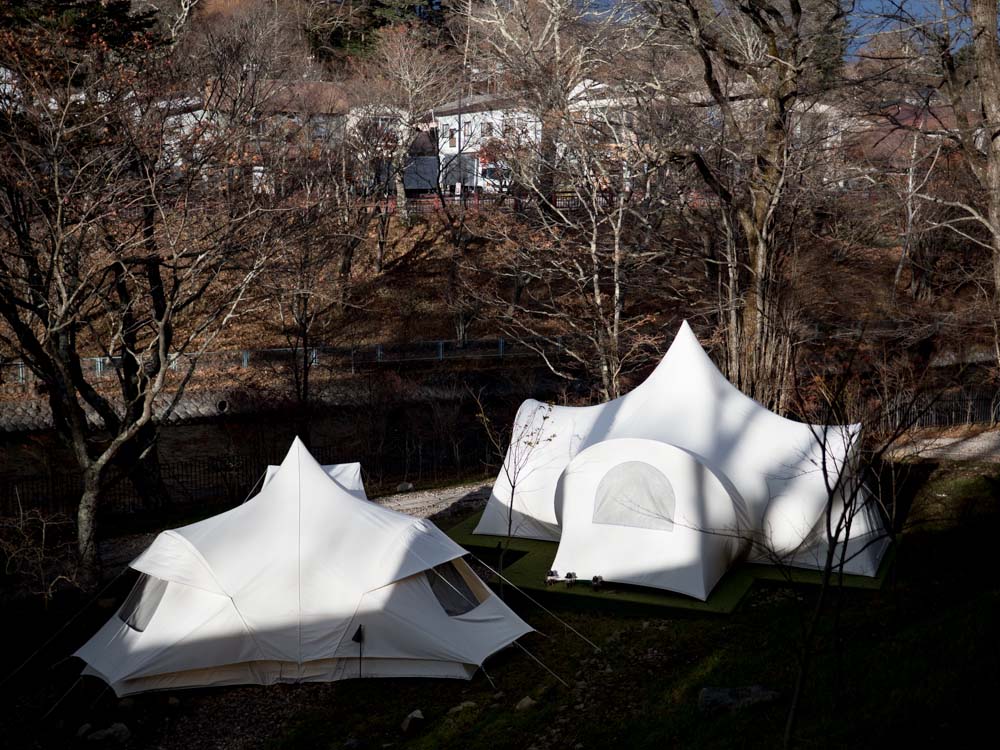 Who is the one and only tent brand “Moss Tents”?

As Bill Moss says, “Tents are works of art that humans can live in,” they have created a series of famous tents that have won numerous design awards, some of which are permanently exhibited at the MoMA (Museum of Modern Art, New York). 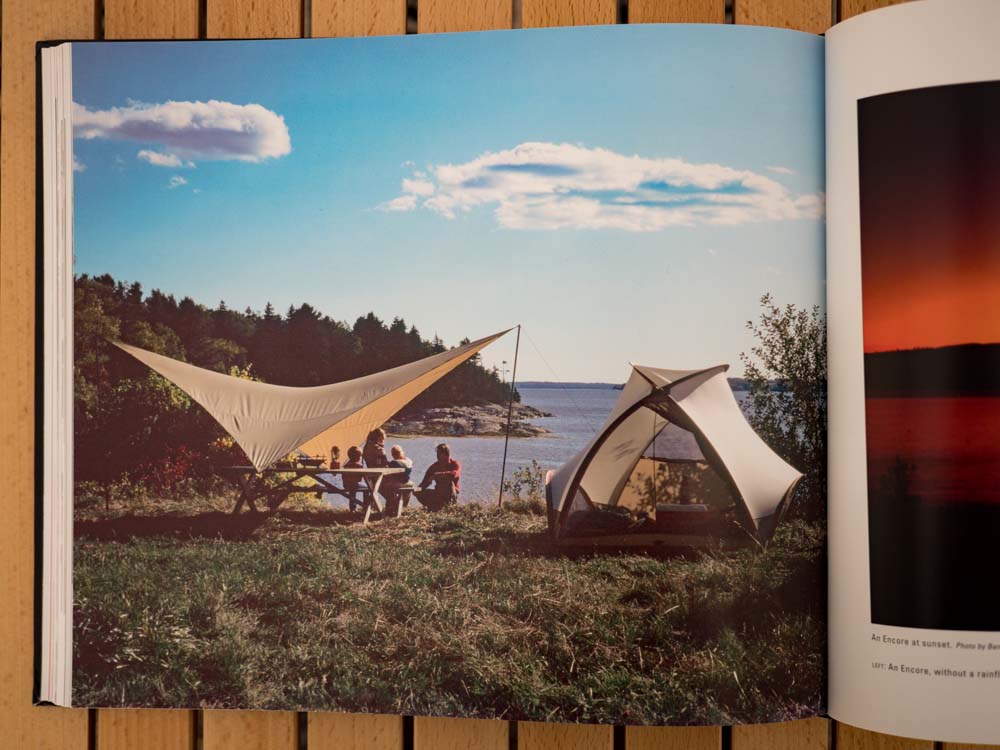 The numerous tents created by Bill Moss have an unparalleled silhouette and curvaceous beauty, and are still popular as tents that never lose their appeal, but unfortunately Moss’ tent division was acquired in 2001. Nowadays, the tents from that time are quite valuable and difficult to obtain, and it was hoped that they would one day be revived.

Recently, it was finally decided that the tent “Optimum”, which can be said to be Bill Moss’ masterpiece, and the tarps “PENTAWING” and “PARAWING” will be reprinted!

The artistic cotton tent “Optimum” has been revived!

This time the Moss Representative of Moss Japan, which worked on the reproduction of this tent: Takamitsu Fujisawa said, “I fell in love with the wonderful of manufacturing as an art form because of Bill Moss,” which led to Mr. Fujisawa to chose this tent as the first reproduction model, the cotton tent “Optimum” first announced in 1978. 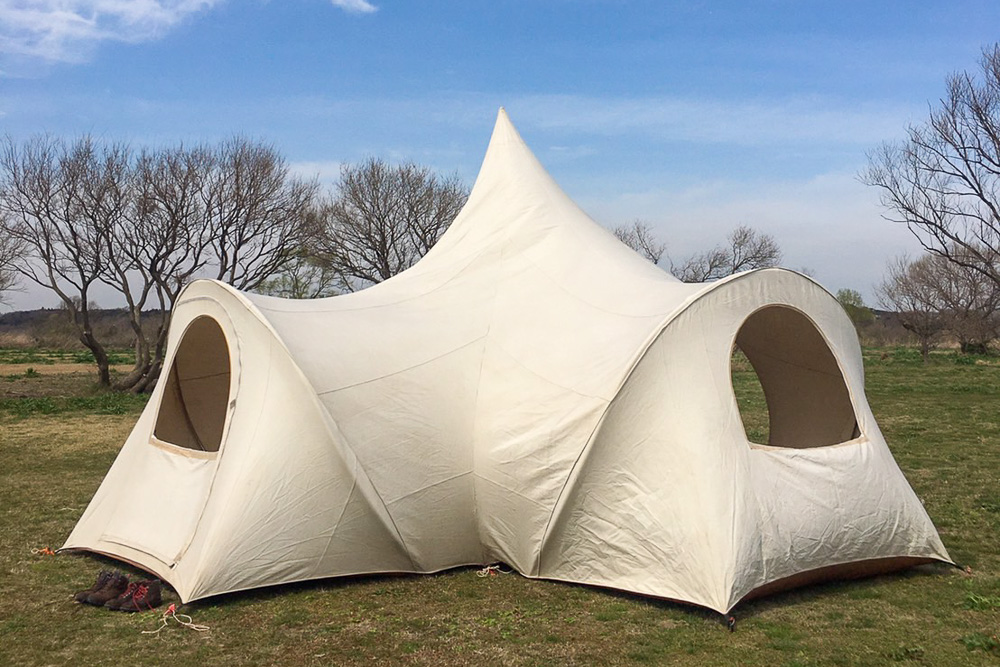 The only existing Optimum 350 in the world

This tent composed of graceful curves reminiscent of nomadic gers and Muslim temples is a masterpiece representing the curved structure produced by Bill Moss, and has won numerous design awards and is unique even in modern times after more than 40 years. It’s a tent that gives a one of a kind feeling. 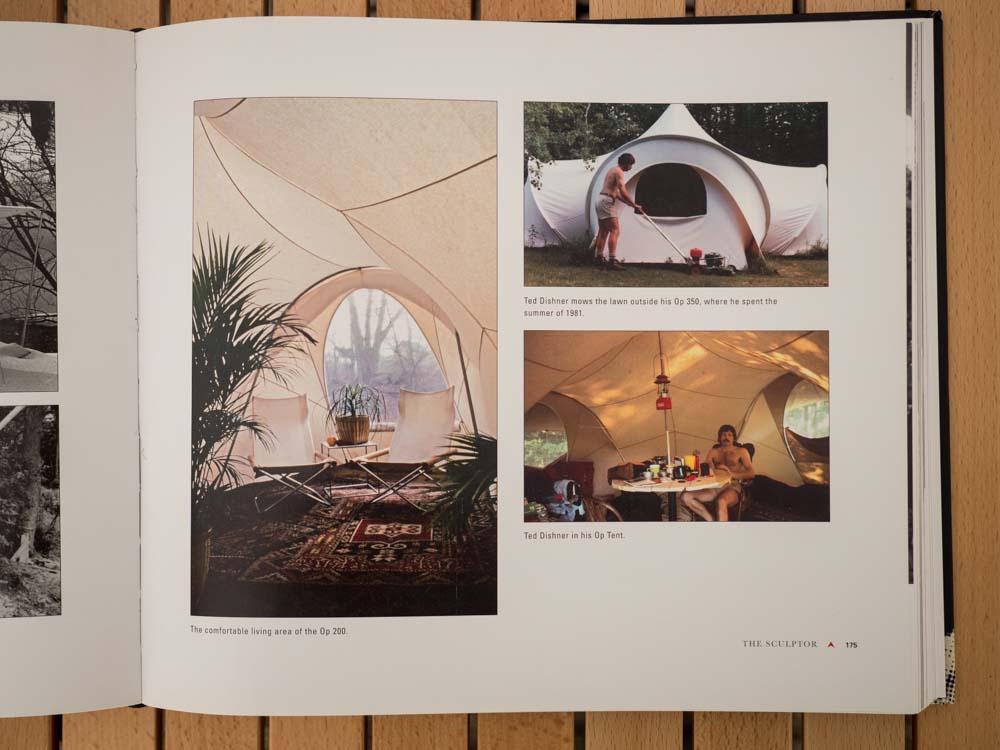 “In re-producing this tent, we inherited Bill Moss’s wishes and focused on faithfully recreating what he thought,” he said, starting with reproducing the cotton fabric used in Optimum. It is said that the fabric was made from scratch at a factory in Fukui prefecture, and was remade many times to give it a sufficient feeling of tension. 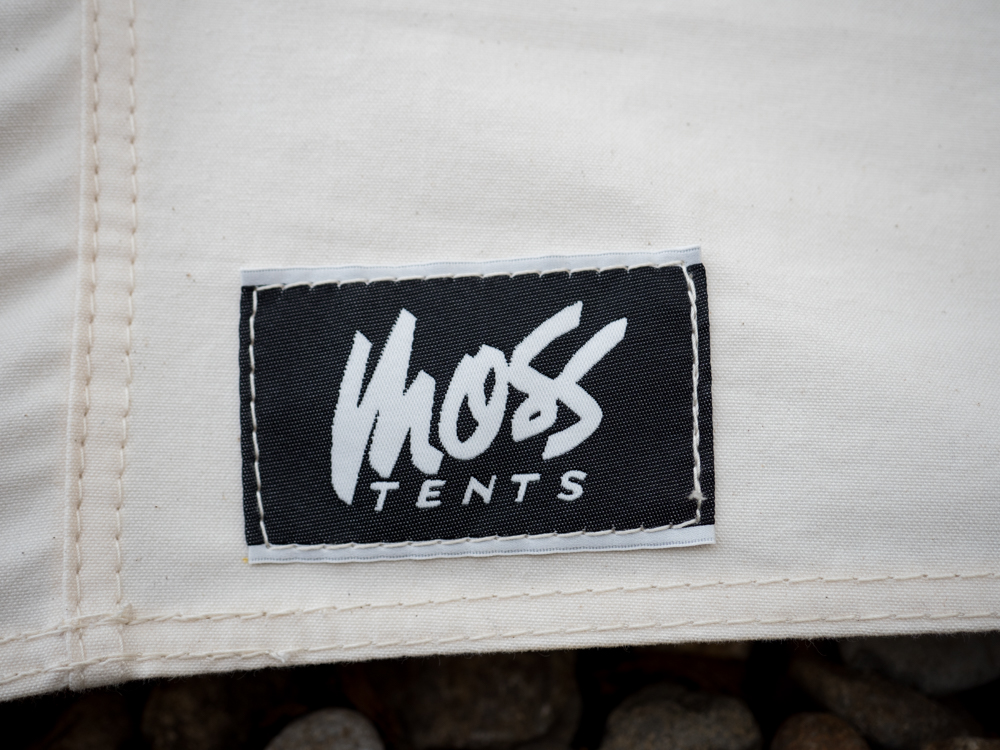 In addition, he obtained the Optimum 350, which is said to be the only one remaining in the world, and made full use of the pattern sent from the United States at that time to faithfully reproduce it through trial and error. 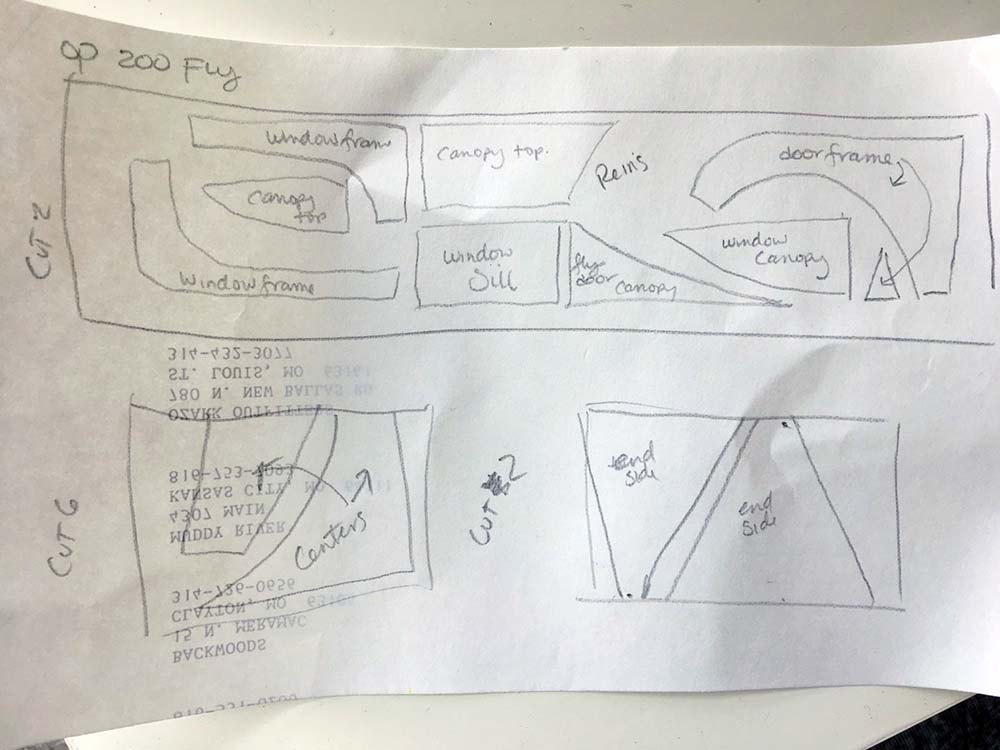 Finally, the Optimum 200 and Optimum 350, which were unveiled this time, were completed. 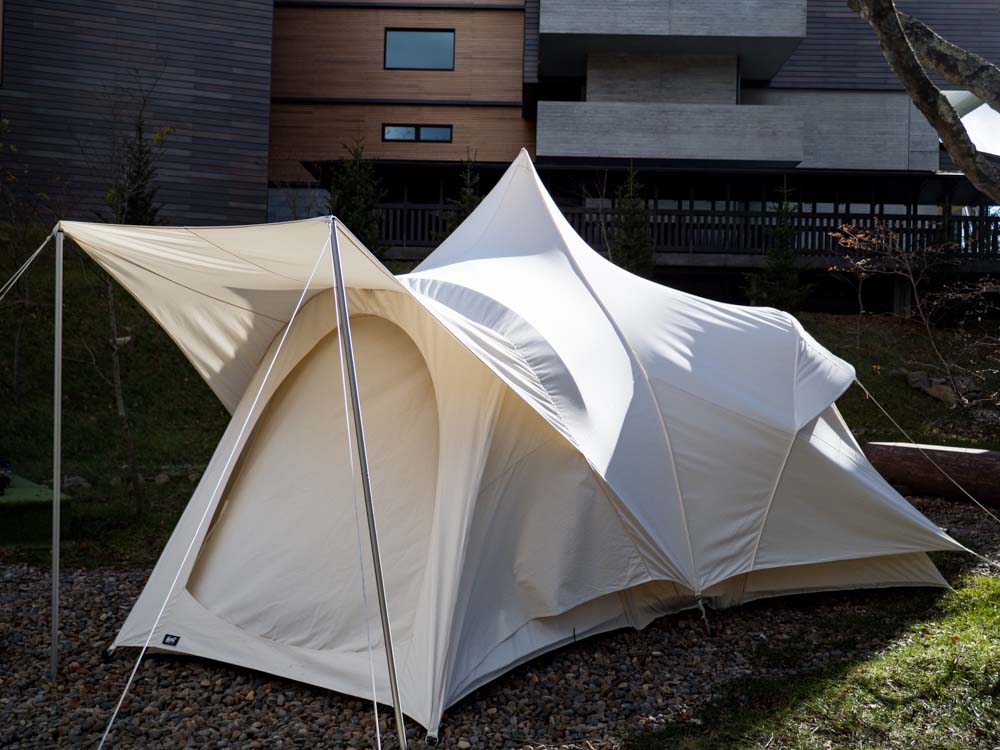 The Optimum 200 measures 200 square feet and has a Y-shaped floor. 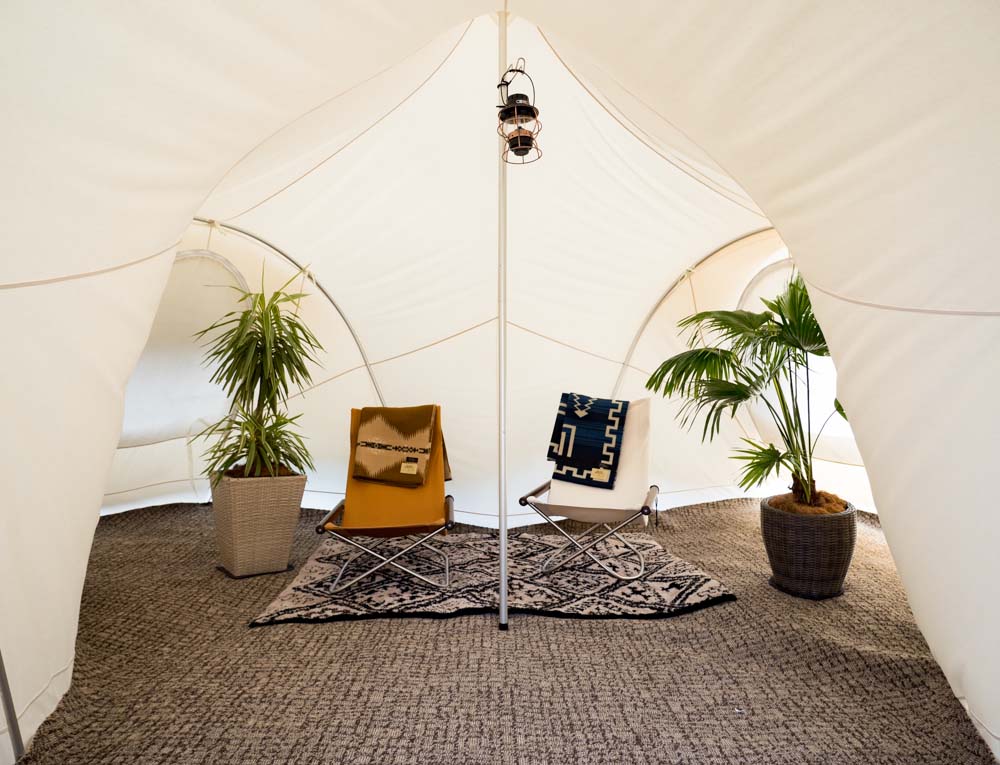 With a structure that is raised by a center pole and supported by a U-shaped frame, it is comfortable enough for adults to stand up in. There is one doorway, but there are two other large windows with mesh. 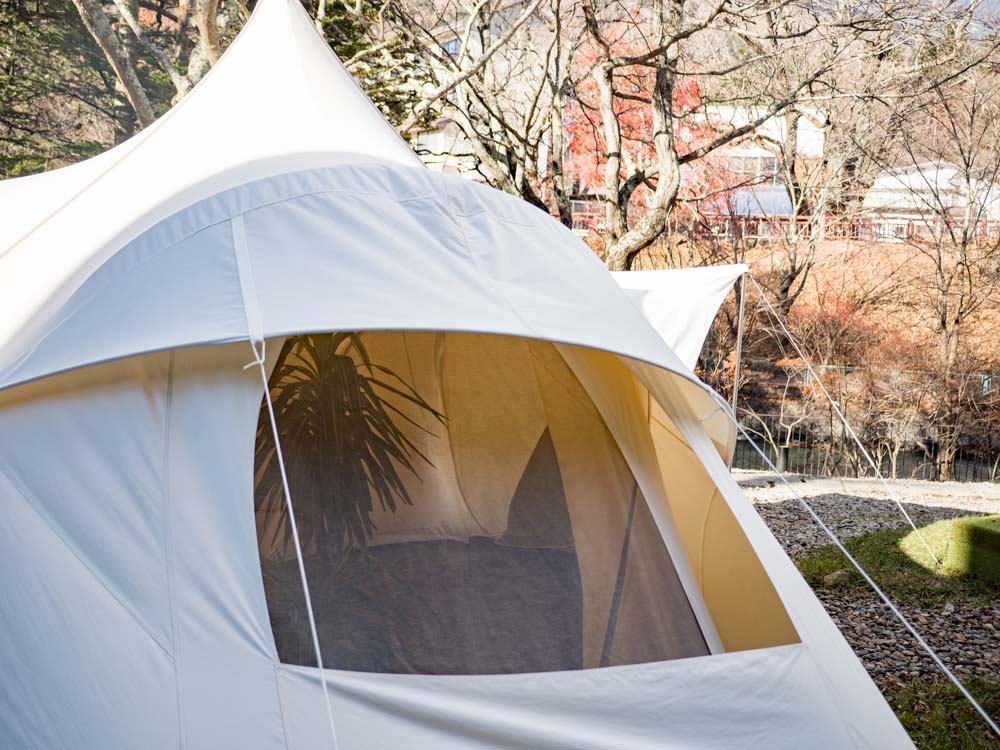 In addition, in order to cope with the rainy climate of Japan, the ground sheet has been improved to a “bathtub type” with a rising edge. 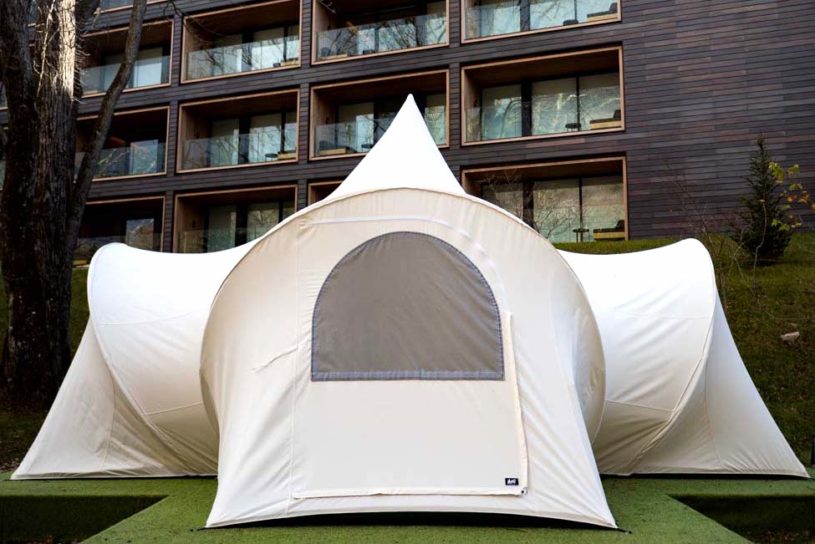 The Optimum 350 measures 350 square feet and has a cross-shaped floor. 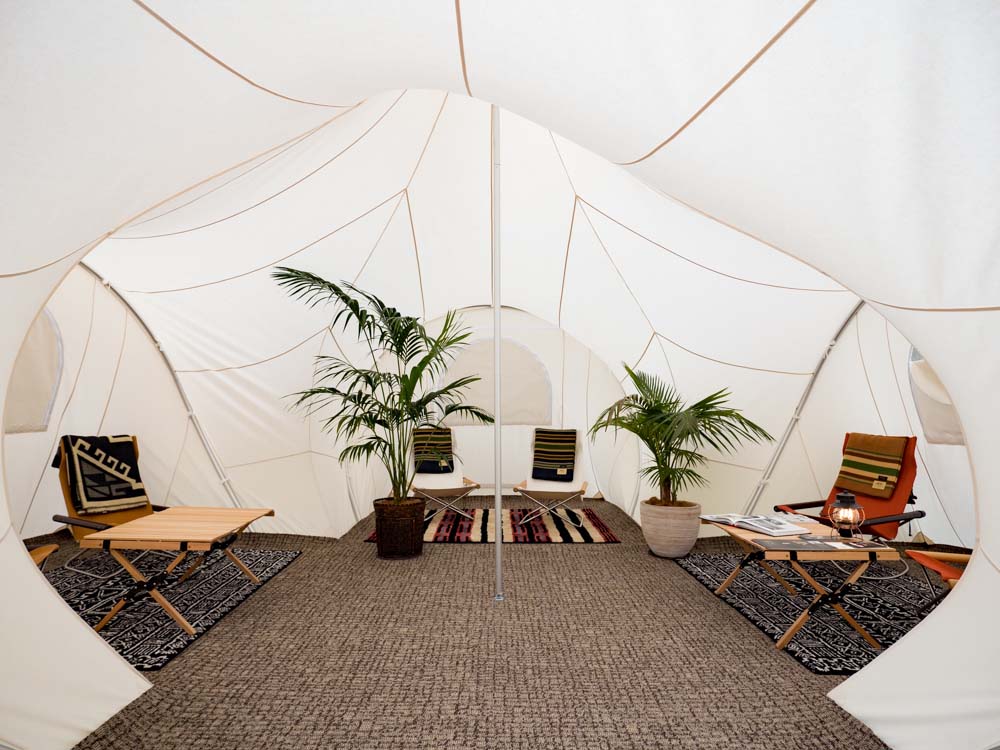 It is extremely comfortable and has two entrances and exits. 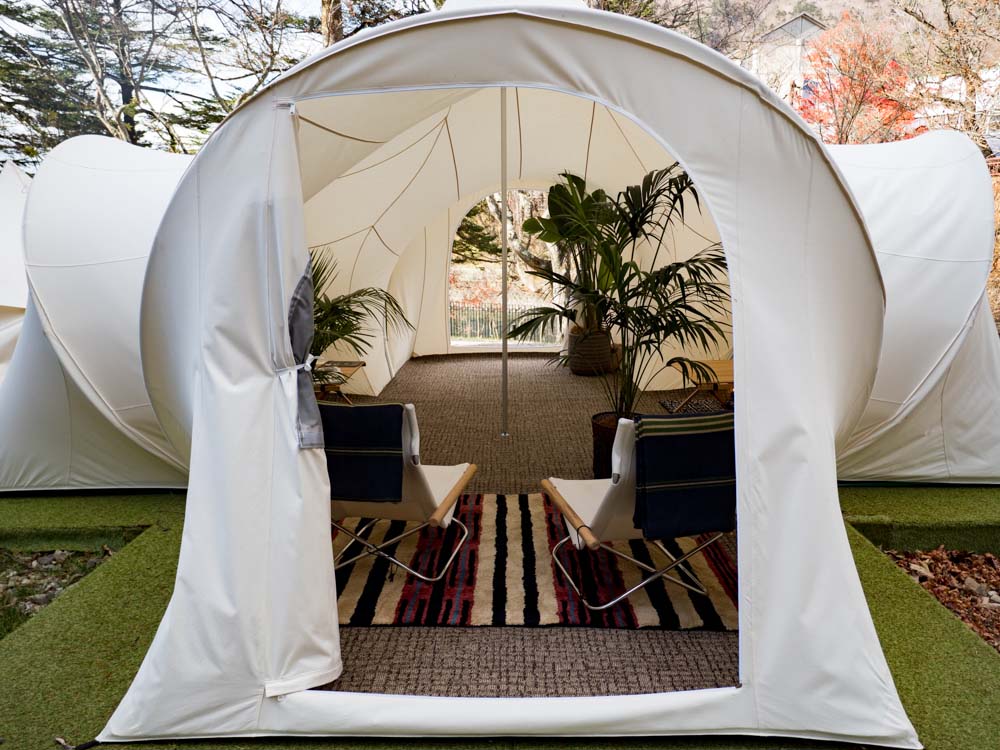 Since the fly was not completed in time, only the inner was exhibited.

There was a lot of strong wind on the day of the interview, but it was impressive that the characteristic curved form was firmly resisting the wind. 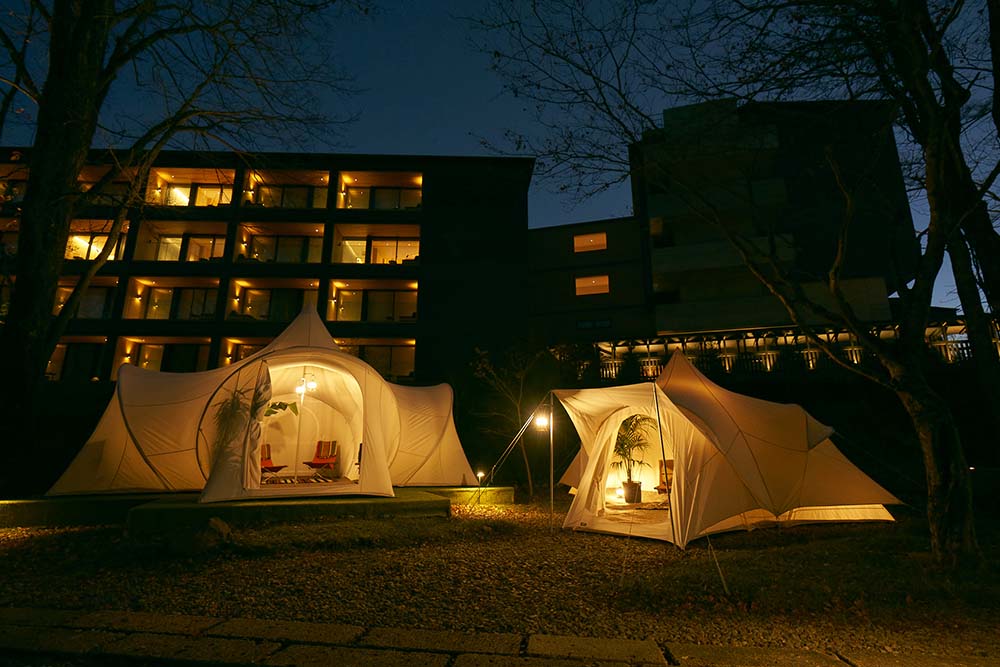 Unfortunately, the Optimum 350 and Optimum 200 will not be released to the general public and will only be made to order for companies. It seems that several companies have already inquired, so we may eb able to stay at the Grand Pingfield in an Optimum tent in the near future. 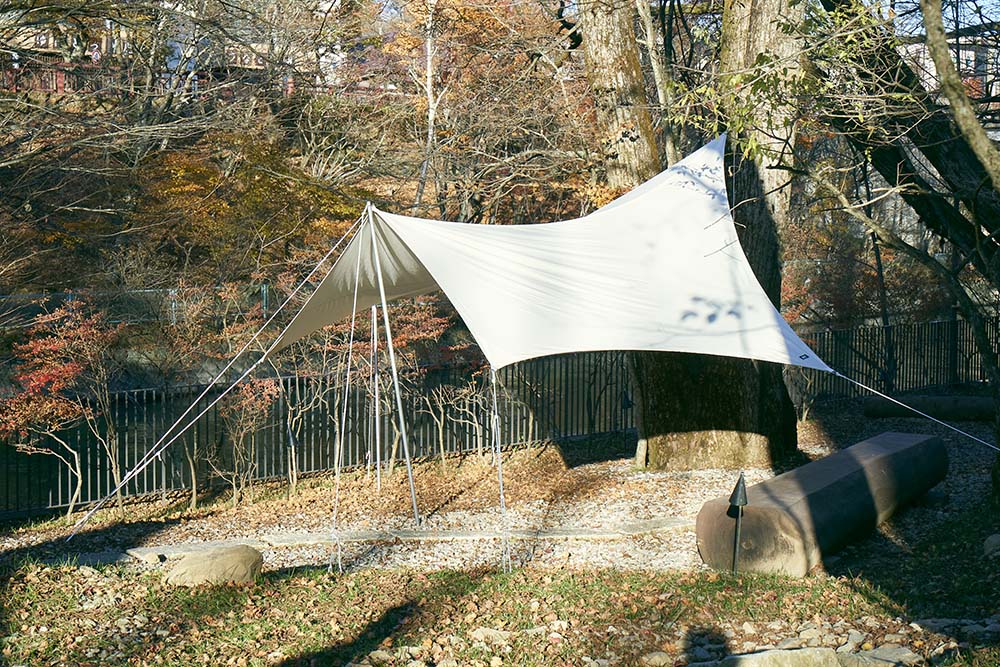 Two models of tarp are also planned to be reproduced. First of all, the pentagonal tarp “Penta Wing” that has a graceful curve. It uses 9 oz water-repellent cotton duck fabric that is both solid yet supple. With its cool and natural coloring, the gentle lighting unique to cotton materials is also an attractive feature.

As a leading model, the “12’PENTAWING” has already been released on GO OUT Online, but this time, the “19′ PENTAWING”, which is one size larger, was unveiled. In the future, it will be available in two sizes, 19 feet, which can accommodate families and groups, and 12 feet for solos and duos. 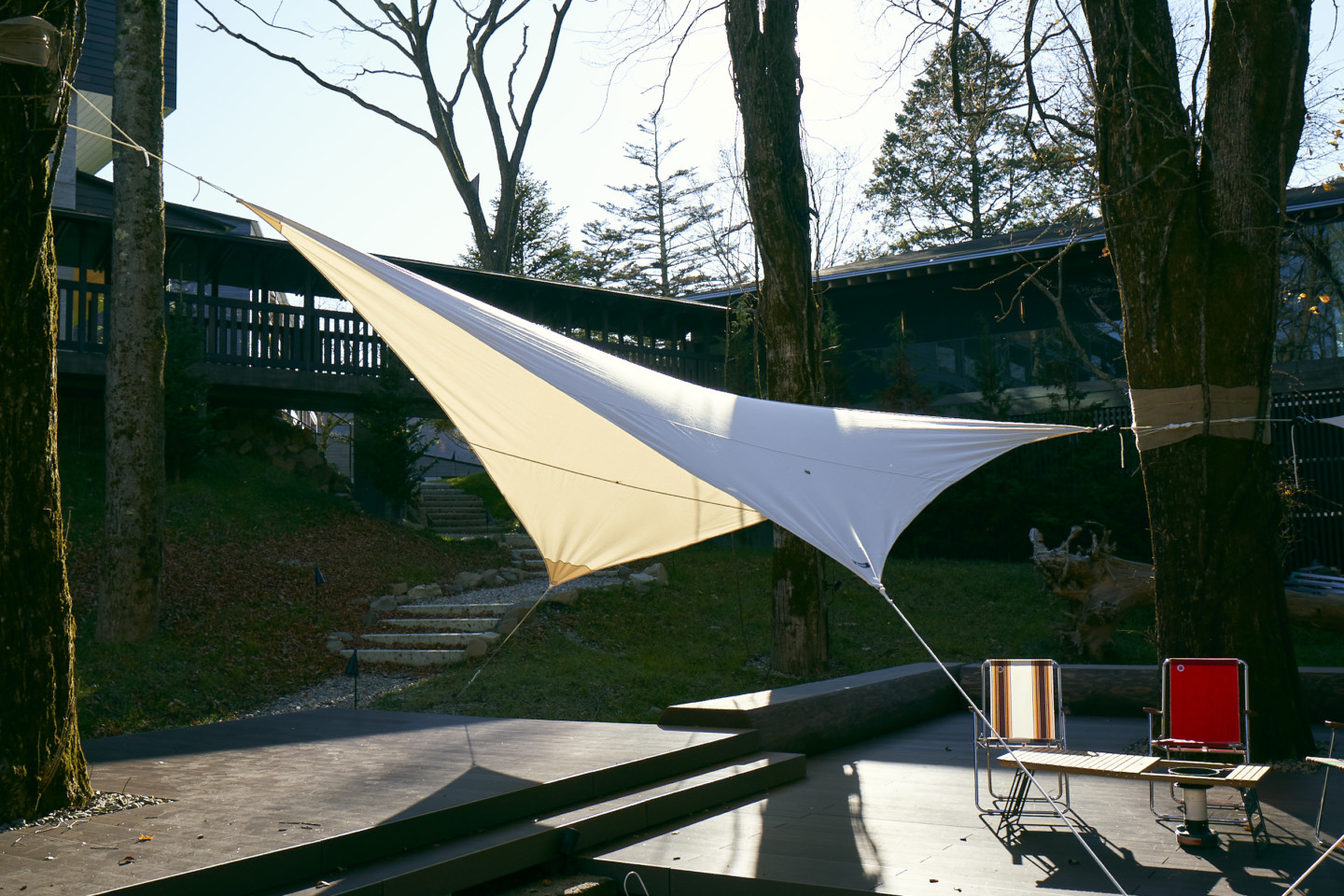 Another tarp to be reprinted is the beautiful wing-shaped square tarp “Para Wing” that represents Moss perfectly. Originally, the Para Wing was a tarp made of nylon fabric, but the model unveiled this time uses cotton fabric and the size is 19 feet.

In addition to the 19-foot cotton material, it will be available in four models: 12-foot cotton, and 12-foot and 19-foot in a nylon material.

The price has not yet been announced.

Nylon fabric tents will be reprinted in the future. And also available for general sale !?

In addition to the tents and tarps that are being restored, there are many masterpieces created by Bill Moss. Therefore Mr. Fujisawa of Moss Japan should have many more tents to reprint. So, I asked Mr. Fujisawa about the future developments of Moss’ Tents.

“First, we reprinted the iconic cotton tent, but in the future we plan to reprint backpacking tents made of nylon fabric.” 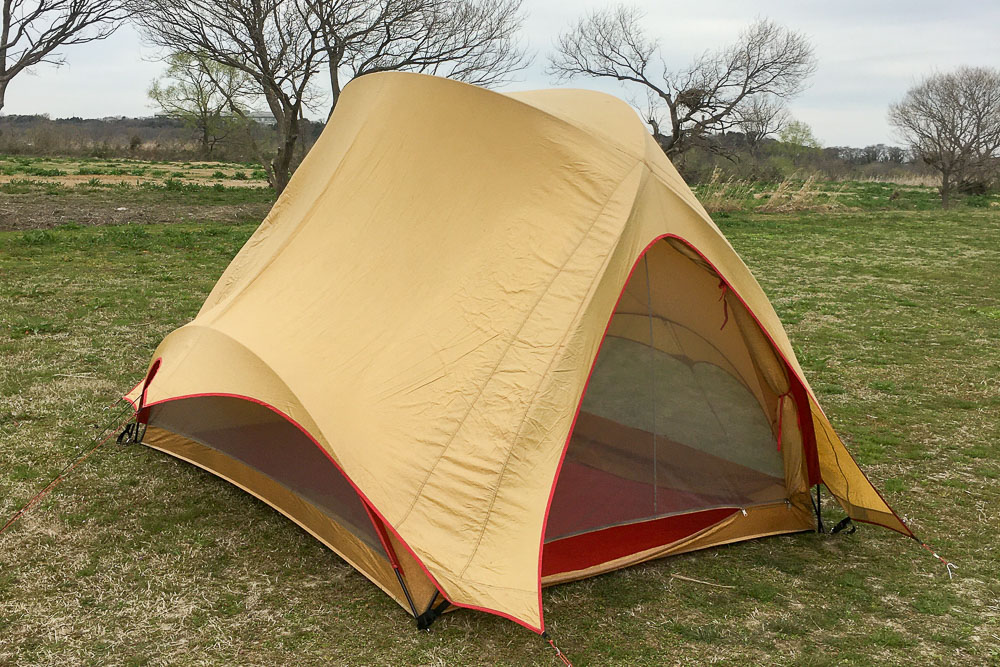 The large family tent “Encore” where 4 adults can relax in comfort.

“We are planning to reprint the large family tent” Encore “that four adults can spend time in comfortably and the tent” Trillium “with a clover motif, so please look forward to it.” 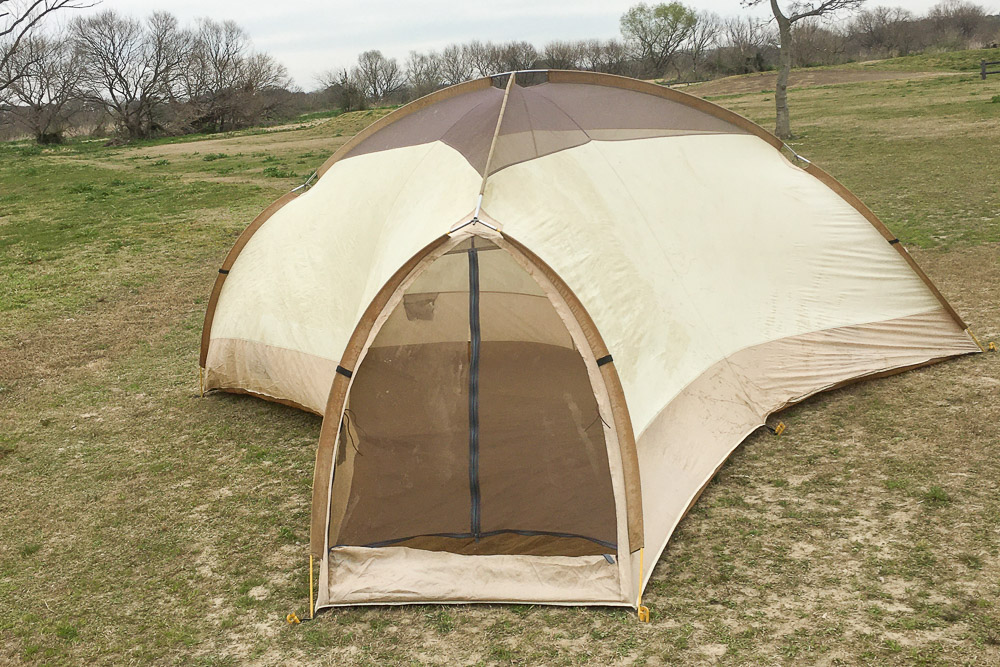 In Angkor and Trillium, the form and color will faithfully reproduce the model at that time, but nylon that used the latest technology will be adopted for the fabric. Samples have already been completed and are being prepared for general release next spring.

Moss Tents have finally begun to make some large movements, and I’m looking forward to their future developments.