Check out the camping cars! Tough vehicles who support a fashionable camping style. # 1

VEHICLES
2 years ago
by GO OUT

Gear such as tents, tables and chairs are indispensable for camping. But more important than that is the car! The role of the car, which plays an active role not only in outdoors adventures but also in daily life, and adds color to the camp site, is very important.

However, unlike camping gear, you can’t easily buy or increase the number of cars, so choosing a car is a big decision. It will be helpful if you can hear from actual users about the comfort, performance, appearance and customization of cars for use at a campsite.

Then, let’s take a look at a selection of stylish and comfortable cars from real tent sites that I actually met with and took some snaps!

Abundance of custom parts that let you create it to your own specifications. 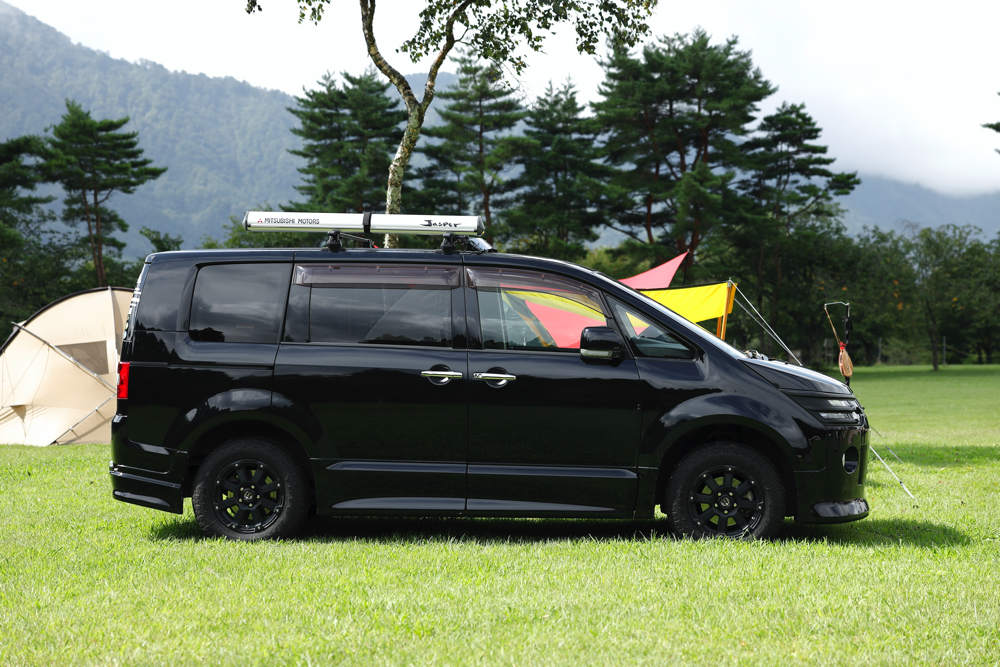 The Delica D: 5, which claims to be the only all-rounder minivan in the world to run off-road. It’s a car that is so popular that it can be said that its rivals no longer exist.

The D: 5, which was born as a successor to the Delica Space Gear that has been produced for 13 years. Otacamp’s favorite car is a memorable one manufactured during this transition period. He bought it because he was attracted to the concept of four-wheel drive, even though it was a one-box with a large living space, but he said that the large number of aftermarket parts is also attractive.

Attach a genuine carrier here and change the headlight cover. Creating a unique original Delica in this way and heading to the camp can be said to be one of the biggest pleasures of outside activities. 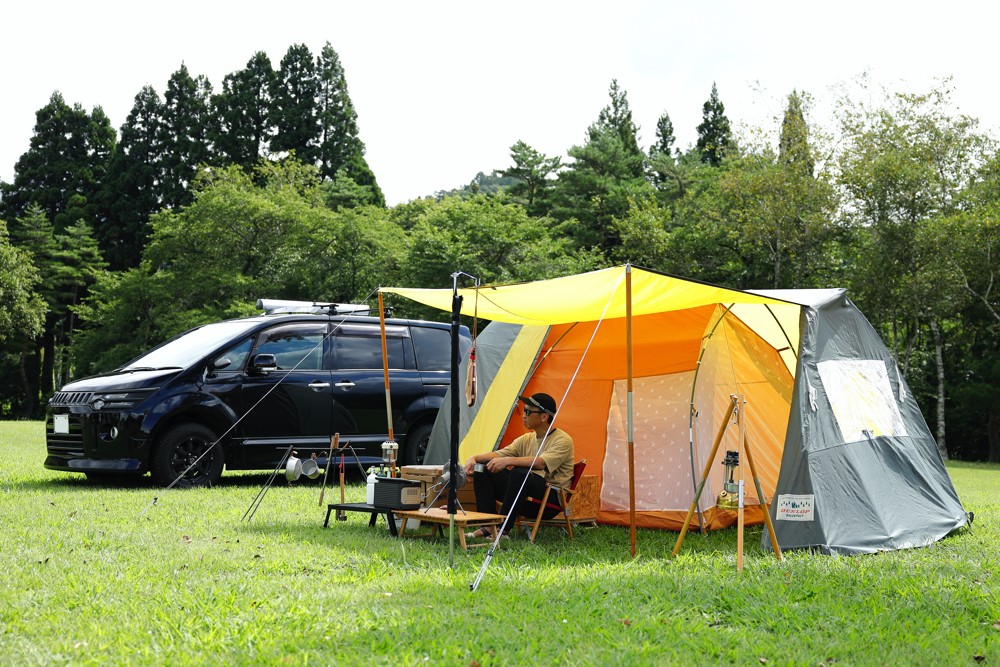 This model is a 2007, Mitsubishi Delica D: 5. The awning found at an auction is attached to the side of the carrier. He usually removes the third row of the car to secure a storage space for camping gear. Large items can be loaded using a carrier.

A camper-arranged van that can carry plenty of people and luggage. 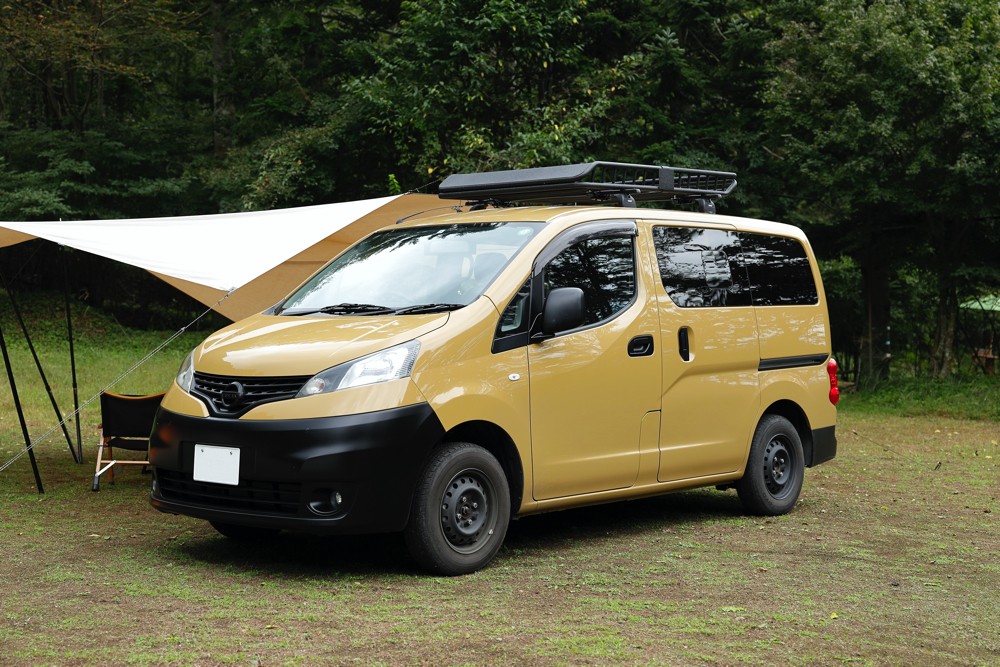 The Vanette from Nissan, whose first generation was born in the 1970s, is actually a series with a long history. It was mainly developed for working vehicles such as commercial vans, taxis, and trucks.

The fifth generation minivan, NV200 Vanette, is Taro’s favorite car. A 7-seater wagon type is selected based on the opinion of his wife that his friends and family want to travel together.

However, since the base is a commercial van, the load capacity is sufficient. The exterior is also beige, which is close to gold, and the wheels are painted by themselves. In addition to assembling and installing a bed for staying in the car by himself, a roof carrier purchased online is also installed inside the car to make it into the complete camper van. 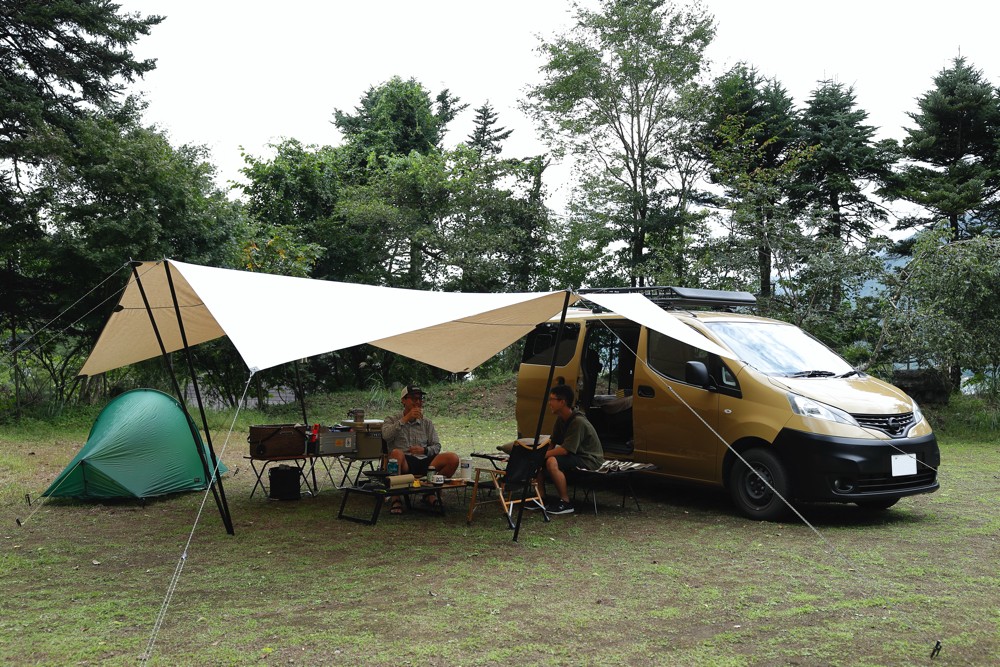 This is a model 2016 Nissan NV200 Vanette. He bought an ejector pipe and plywood at a home improvement store and made a bed for staying in the car. It can be used as a two-level shelf, so it is also useful for storage. If the gear can be stacked flat, more can be loaded.

The decisive factor is the high safety performance that can be relied on even on snowy roads. 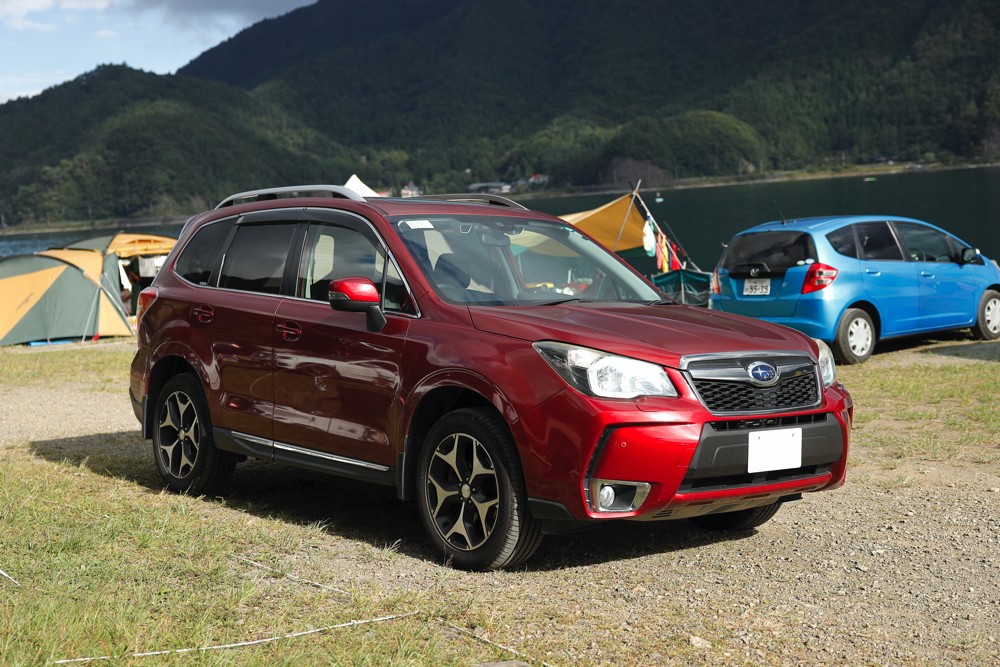 Yuhei’s Forester is the base this time at the site of two friends who enjoyed camping. The owner, who likes camping in the snow, used to ride the outback from the same manufacturer, but at that time, he was helped by the 4WD performance of Subaru. From that experience, he switched to the Forester this year without changing the manufacturer

The 4th generation model that Yuhei rides uses a 4-wheel control system called X-mode. It is a mode in which the car automatically controls even on slippery roads to further improve the ability to run on rough roads, but it is a perfect function for owners who go to snowy mountains every year.

It is a reliable car that safely carries outdoor lovers so that they can enjoy playing outdoors all year round. 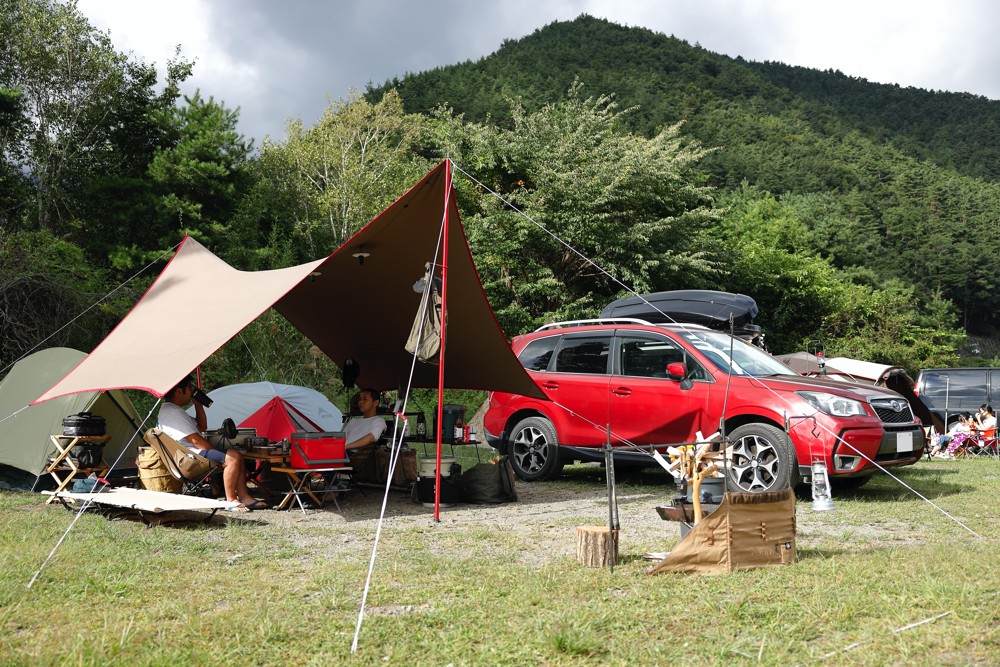 The 2012 model Subaru Forester. Forester, a crossover SUV that is more compact than the previous Outback. However, the luggage with a capacity of 505L is large enough to load gear. It can also be used for heavy snow camps. 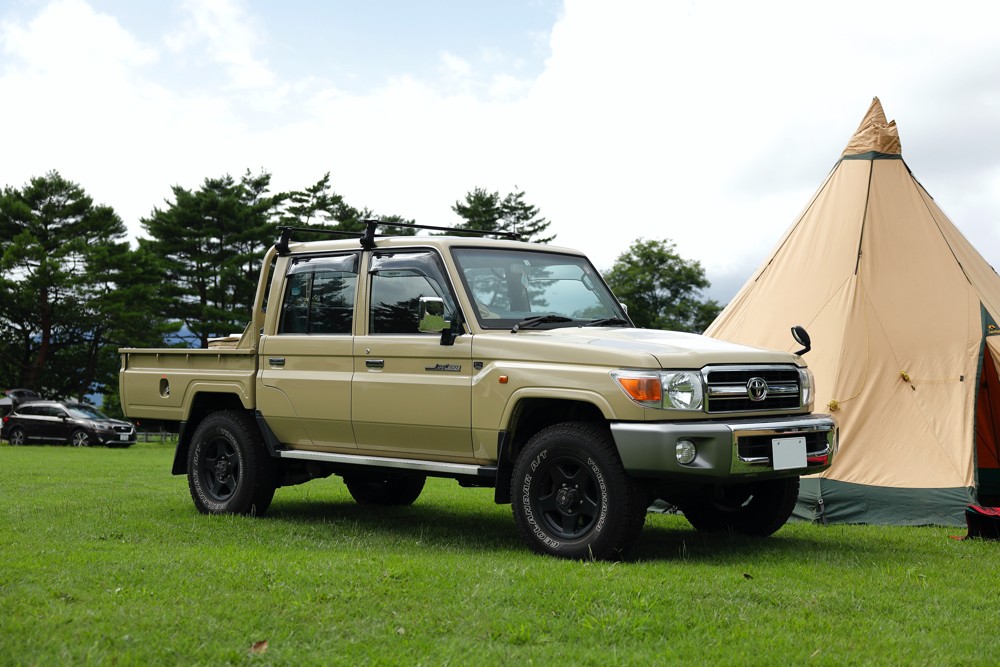 Among the land cruisers that are full-scale SUVs, the 70 series, which is a particularly popular model, has improved off-road driving performance. As the manufacturer says, “You can go anywhere and you can always go home,” it is used in harsh regions around the world, and its robustness is truly genuine.

Such 70 pickup trucks are only available overseas, but will be released for a limited time in 2014, the 30th anniversary of their birth. They received a large number of orders from Japanese fans and overseas.

Yasu was one of the people who was attracted to this pickup truck and bought it, and he says that the load capacity is outstanding. Not to mention the rugged appearance, it seems difficult to find another car again due to its high performance. 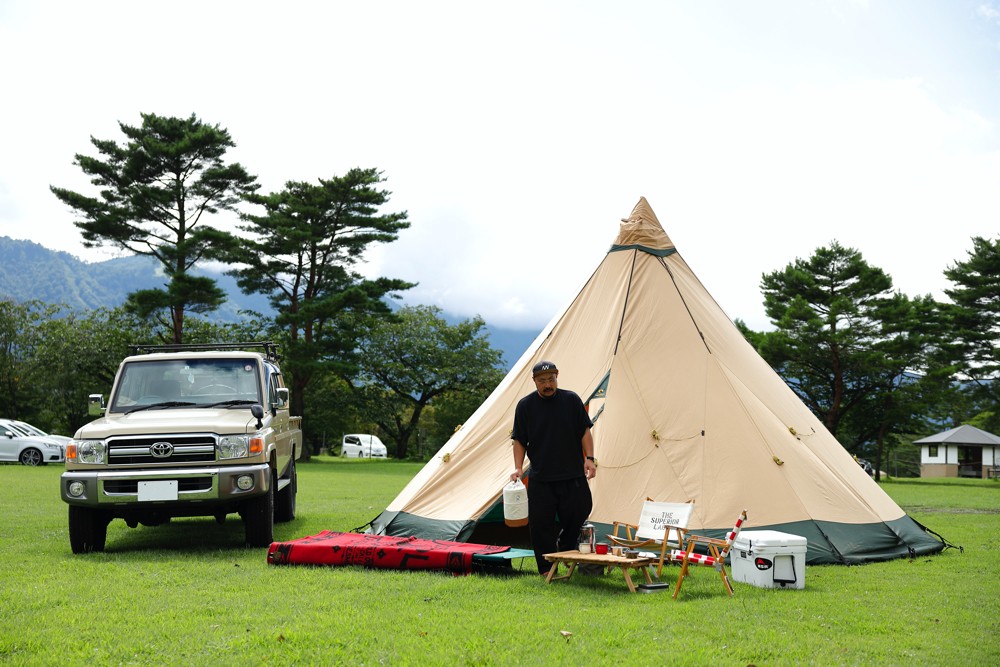 The 2015 model Toyota Land Cruiser 79. It’s a truck that isn’t very familiar in Japan, but yasu, who likes American culture, was looking for a pickup truck. He bought it new because it seats 5 people and is attracted to the angular design.