Check out the camping cars! Tough vehicles who support a fashionable camping style. #2

VEHICLES
2 years ago
by GO OUT

Gear such as tents, tables and chairs are indispensable for camping. But more important than that is the car! The role of the car, which plays an active role not only in outdoors adventures but also in daily life, and adds color to the camp site, is very important.

However, unlike camping gear, you can’t easily buy or increase the number of cars, so choosing a car is a big decision. It will be helpful if you can hear from actual users about the comfort, performance, appearance and customization of cars for use at a campsite.

Then, let’s take a look at a selection of stylish and comfortable cars from real tent sites that I actually met with and took some snaps!

The double back doors is rare. The face of the 80 series. 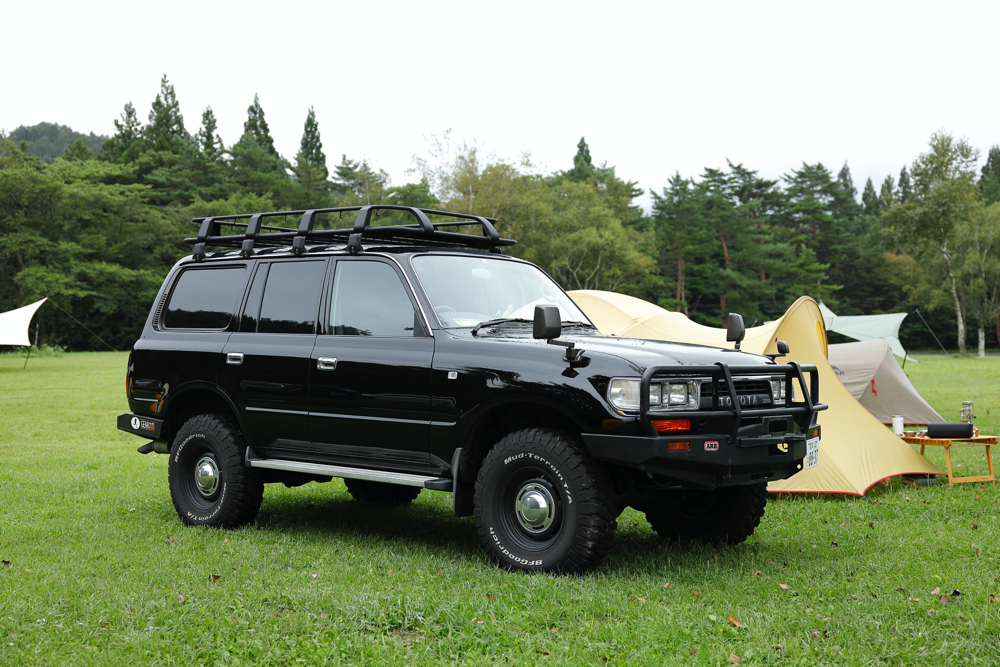 This vehicle features a double-door backdoor that is often said to be convenient by campers. During camping, there are many scenes where luggage is put in and taken out of the car, and a door that can be easily opened and closed would be very convenient. Although there are many overseas distribution of such double-door cars, there are few options when it comes to domestic cars.

The popular Land Cruiser was also a specification that can be seen only in models before 70, but in fact some 80 models also have this double door feature. That is this 80GX. Since the number of registered cars is small, it is a very rare car.

Mr. K23 purchased this model because of the rear doors and diesel engine. In addition, he changed it to a square light and got a classic look while keeping the convenience. 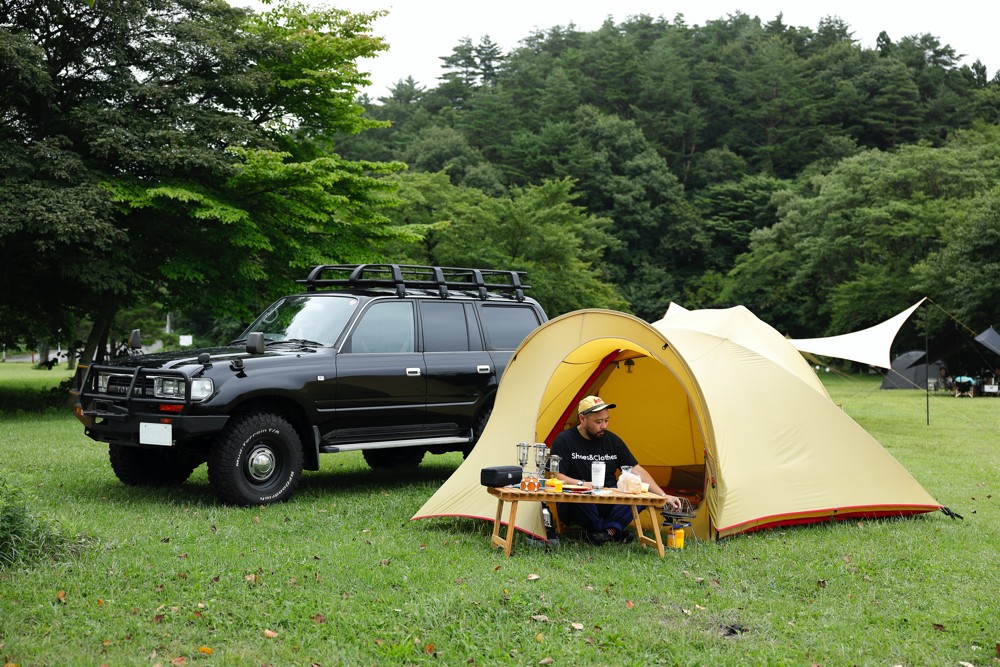 The living room centered on a wooden theme is arranged so that everything is included around the table. 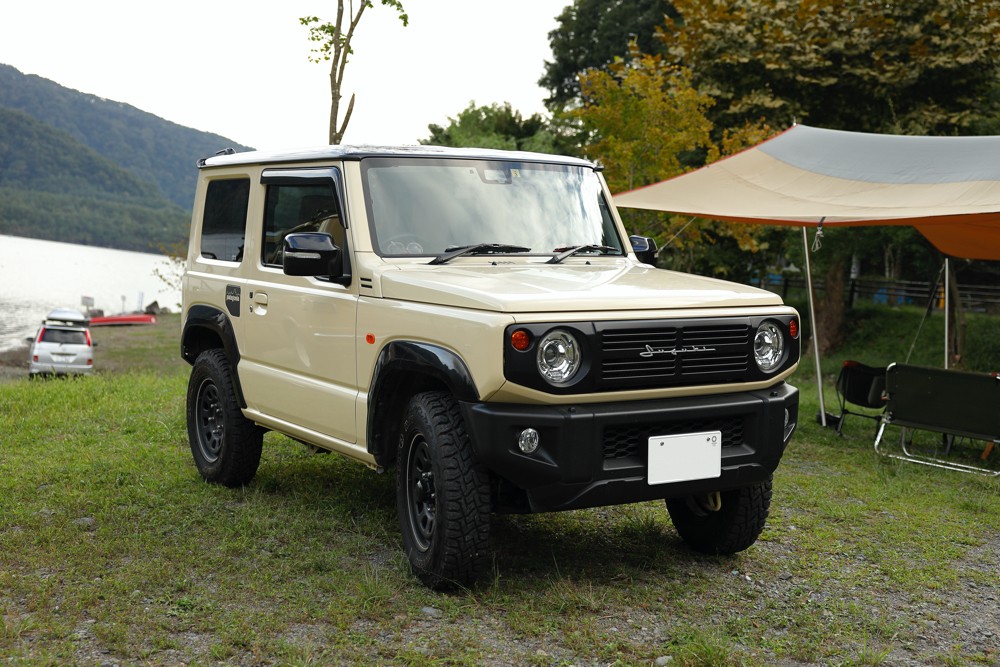 Suzuki’s new Jimny is said to have a constant price, and the used car market is more expensive than new cars. Mr. aollllllloi who got said car early. As well as family camps, he sometimes goes solo so he bought it as a second car on condition that it is a size that can accommodate four family members and it is a four-wheel drive.

After waiting for 9 months, when the car was delivered about half a year ago, he changed the bumper immediately, an over fender was attached, the tire size was increased, as well as the suspension was strengthened. In addition, he seems to be enjoying a full-scale off-road Jimny, by taking it out on mountain roads, shallow rivers, sandy areas and places with poor footing. 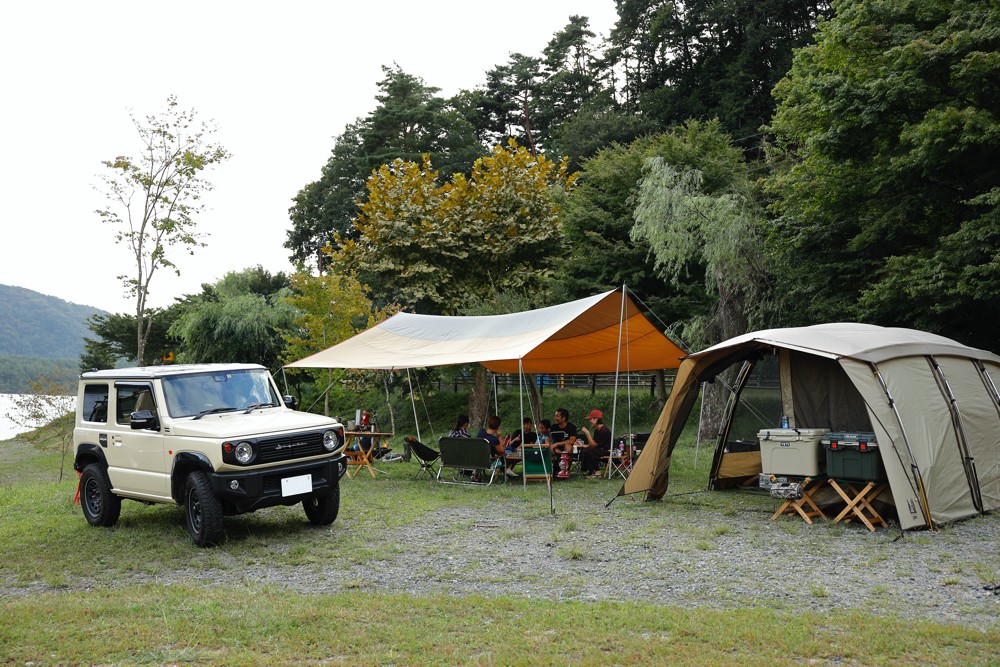 This day was a group camp with 3 families. They arranged the gears they brought with them and arranged them under a large size Snow Peak tarp.

The most beloved in the series, the prestigious Kurokan 4WD. 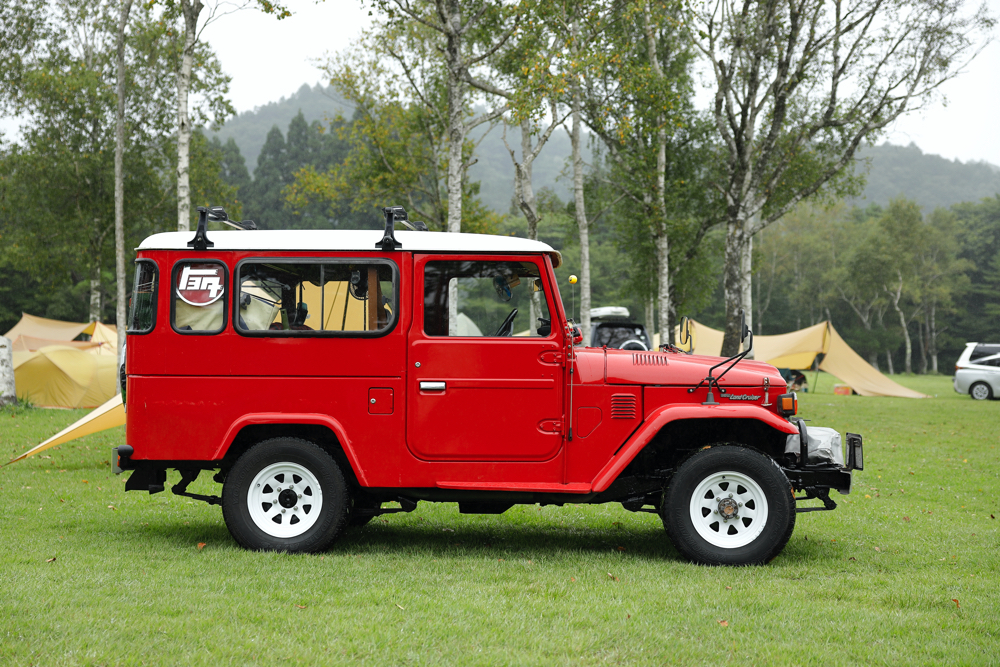 Land Cruiser’s successive models have achieved various feats, but this popular 40 series model is a famous car that spread the name of Land Cruiser all over the world. Originally created for the purpose of the National Police Reserve, development has progressed to the level of the world-famous cross-country car.

Meanwhile, this model was designed mainly for passengers. Developed for expansion in the United States, it is a long-selling car that was a big hit and started domestic sales, and was sold all over the world for the next 24 years.

Therefore, there are many fans, and Mr Hii is one of them. Now that the season has come, he told me that although there is almost no heating or cooling function, it still makes sense to continue using this beloved car. 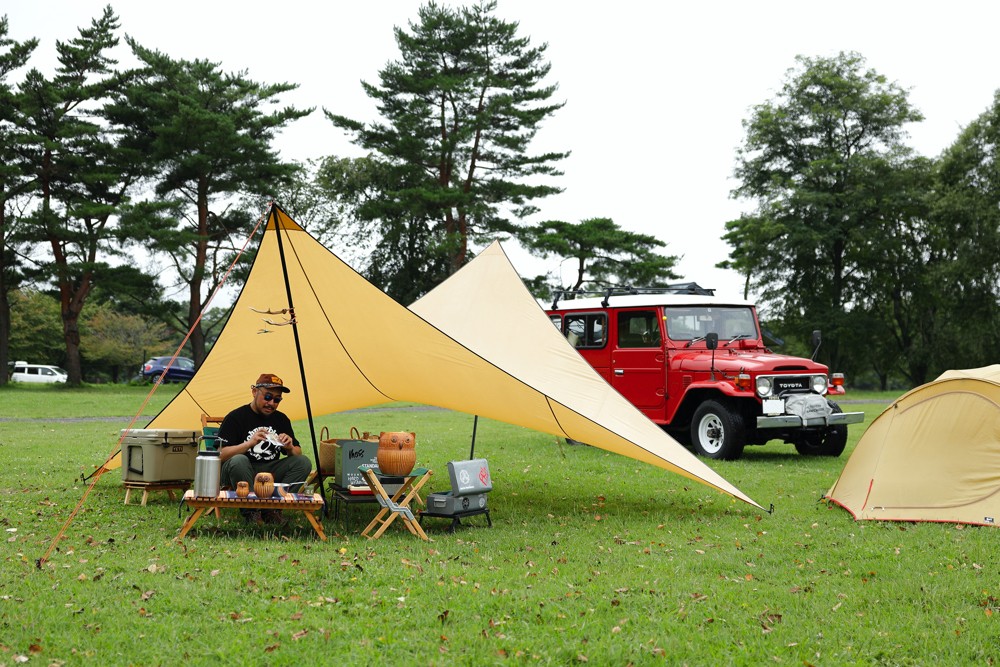 This camp site where long-established gear makers gather, including the masterpiece Moss Tarp, has a style reminiscent of the good old days of America.

A car that you can enjoy customizing with inside space where adults can stand and walk. 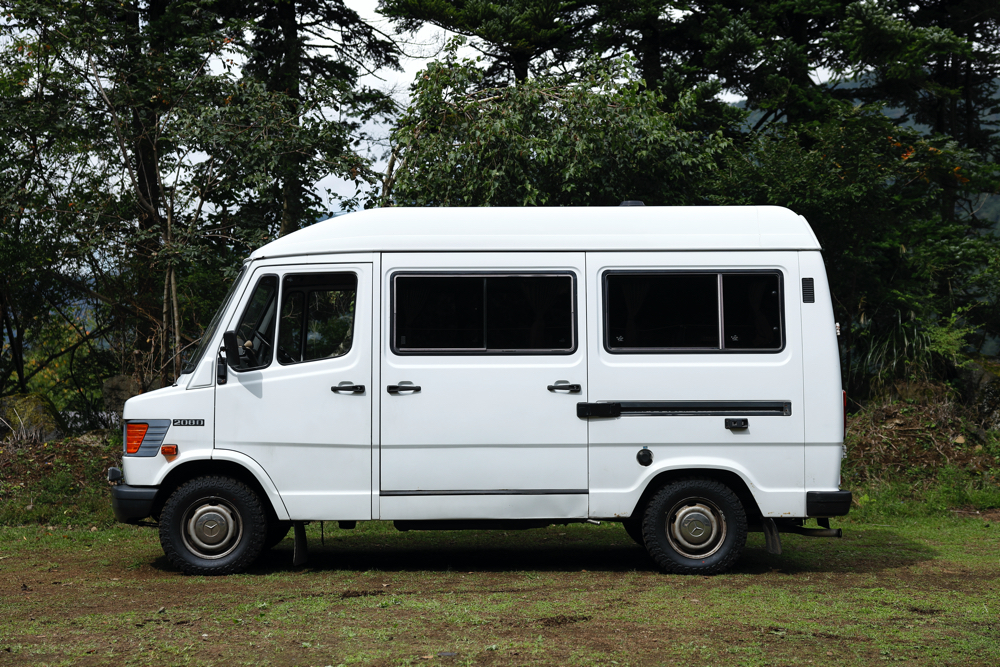 A full-size van from Mercedes-Benz, famous for its transporter, produced from the late 1980s. Hanahana80 dared to choose this 208D because he wanted to enjoy the charm of older cars. It is a popular model that sold tens of thousands of units all over the world, and was sold by Mitsubishi Fuso as an agent at that time.

However, the current distribution volume in the used car market is small, and he is fortunate to have found it by chance. This car, which was made mainly for commercial use, is tall enough for adults to stand and walk, and is large enough to accommodate five family members.

Therefore, many people remodel the interior of the car to camper specifications. Hanahana80 is also in the process of customizing, and the interior will be made of wood in the future. 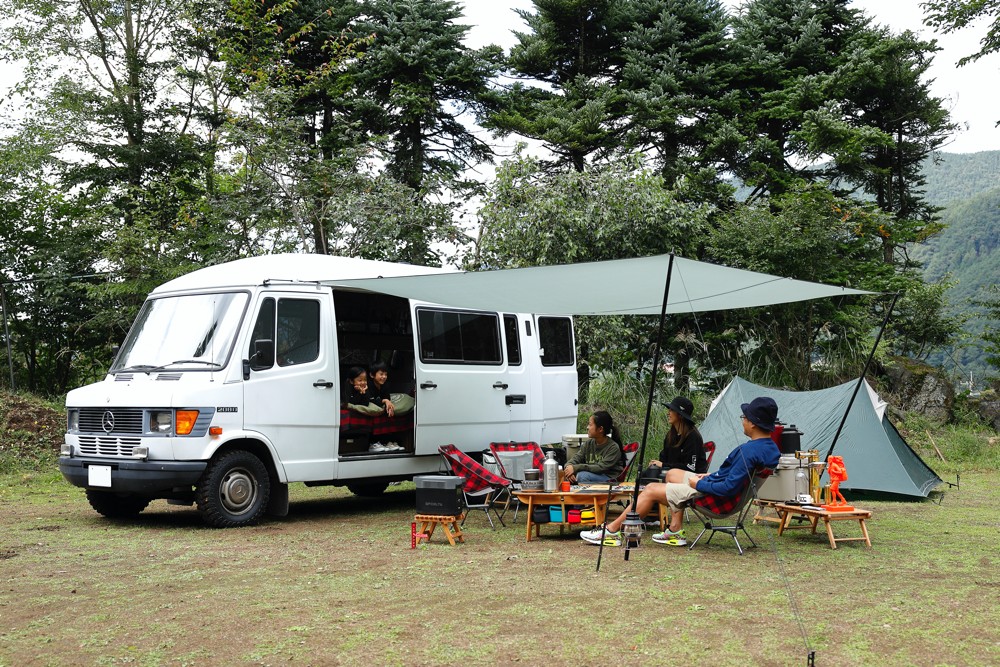 The rare tarp from Love, which is famous for its clothing, was connected to the car to make it a living room and it goes well with the color of the car.