The 3rd annual GO OUT WINTER CAMP was held on the 15th and 16th of December 2018. Campers arrived to the base camp in below freezing temperature。Here we present the 2nd part of our participants snaps.

Please make sure to check out our other articles:

Livening up a commercial vehicle. 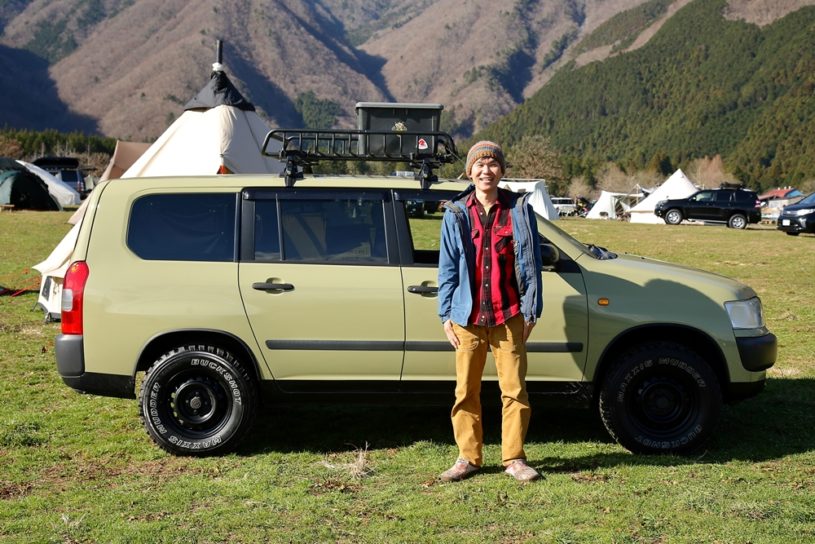 It’s possible to quickly change even the commercial use Probox into an outdoor style. Mr Kurokawa changed from a Lapin about one year ago and had a full custom job applied to the Probox to adapt it to his needs.

“I don’t want to be the same as everyone else. I like the square shape of the design along with the body color”. 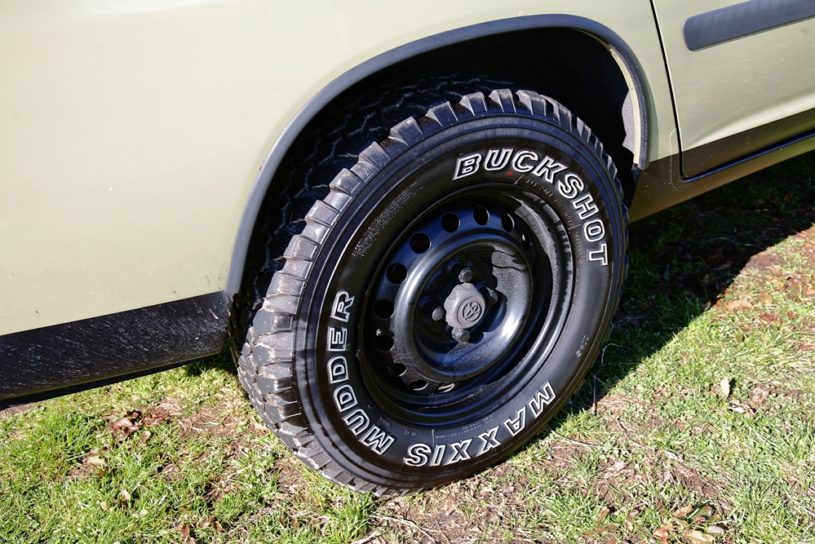 The vehicle has been given a 2inch lift up and block pattern Maxis tyres added plus a new grill which is finished in matt black which contrasts really well with the cedar green body. Small Yakima roof racks and flood lights are another excellent addition. 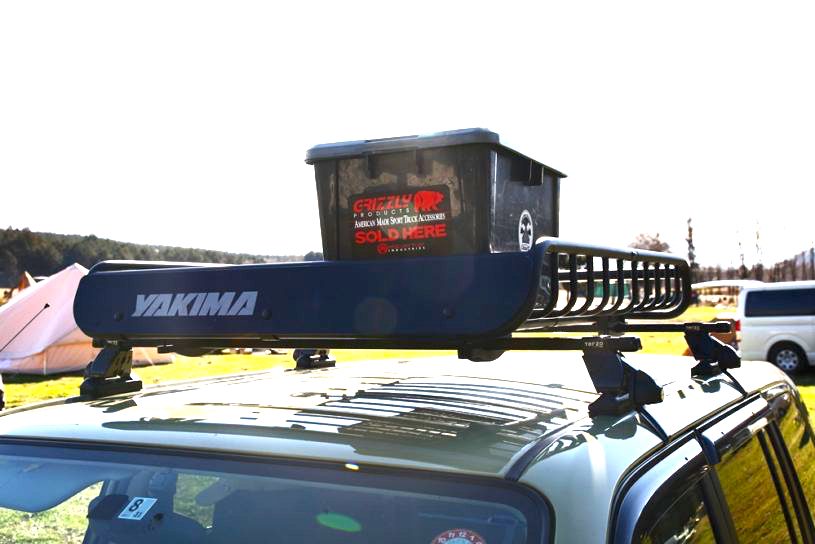 It of course comes with 4WD and an F grade gasoline engine. The Probox is originally a commercial vehicle so its durable and sturdy enough for Mr Kurokawa who goes camping up to 20 times per year! 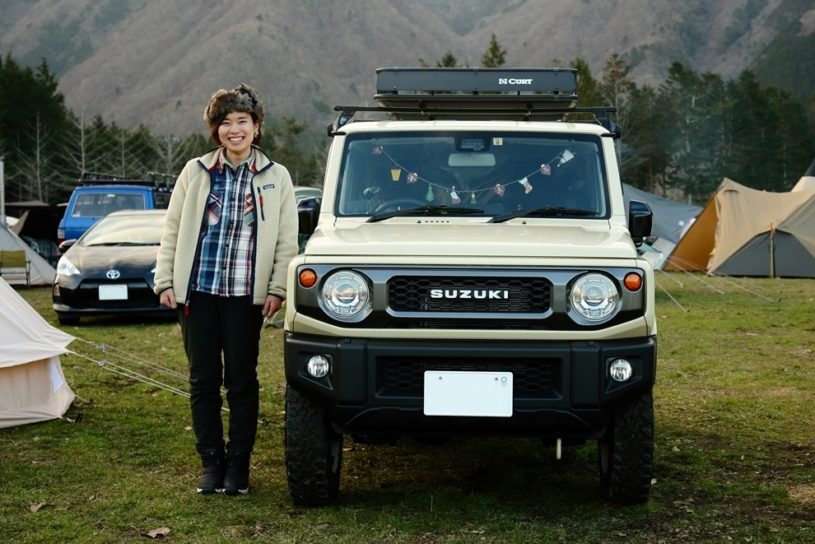 The popular new Jimny model has been long for more than a year and it has now been 4 months since its release but this is the only one we have seen today. We spoke to ya_2621 who was relaxing in a Nordisk Asgard with a kotatsu.

“I used to have a new beetle but I wanted to change to a more square shaped vehicle so when they announced the new Jimny model I made a reservation immediately.” The juxtaposition between the owners cuteness and the rustic nature of the Jimny really struck a chord with us. 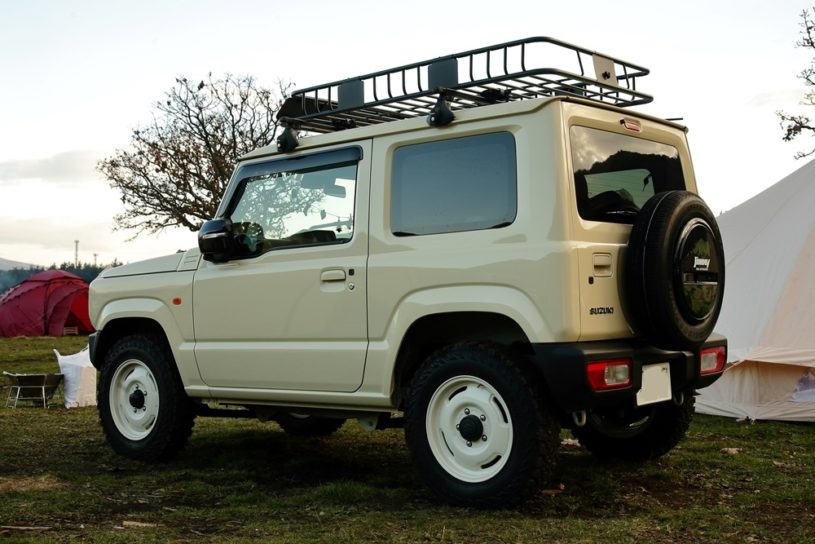 To match the soft ivory aesthetic of the main body, the wheels have been changed to an Apio aluminum wheel (Wild Bore SR) which is reminiscent of a steel wheel, while the main body is customized with a CURT carrier and camouflage tire decals. 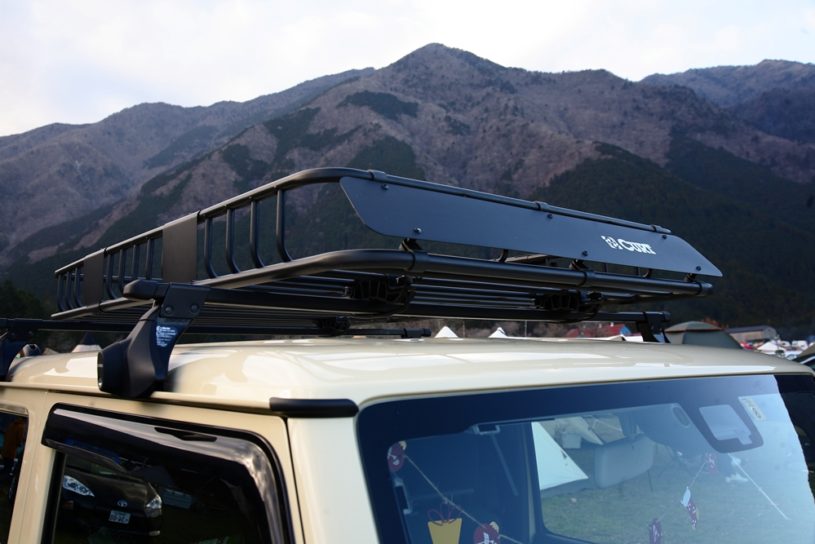 ya_2621 has already managed to clock about 8000km in three months since the purchase of her new beloved vehicle! Originally an avid biker she has previously toured camp sites on large motorcycle (W800).

“It’s less intimidating than riding a bike without the feeling of flying haha” she said as she enjoys her more relaxed outdoor lifestyle with the new Jimny.

Enjoying a family camping trip with a sturdy off roader! 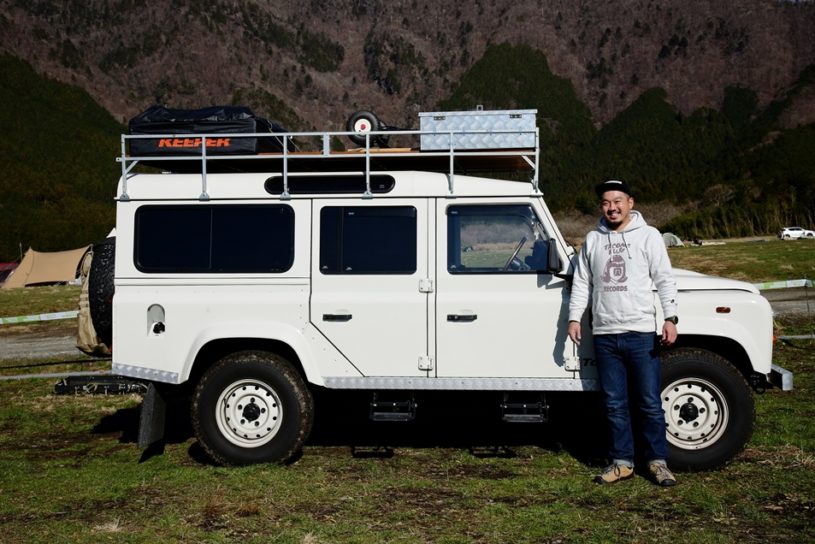 The defender design, including the model 110, has barely changed over the past 30 years retaining the dull-scale 4WD with an aluminum body on a tough ladder frame. It has an ‘earthy’ atmosphere which helps distinguish it from other range rovers such as the G Class. 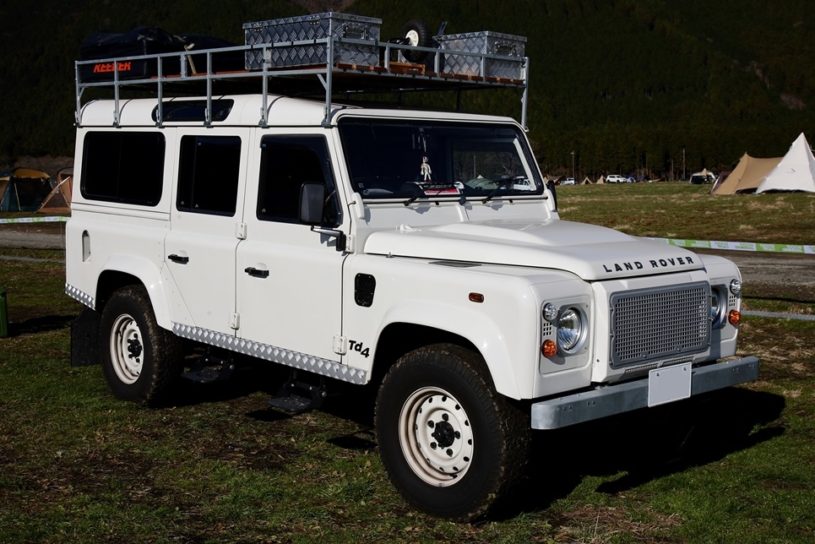 Mr Yoshimi has a family of 5 in tow, and originally owned a Wrangler but as his children have grown he switched to this current more spacious 2008 model Defender.

“I really wanted an 80’s or 90’s model but there harder to maintain”. Defenders tend to maintain their price regardless of the era so even older models can still be quite expensive. 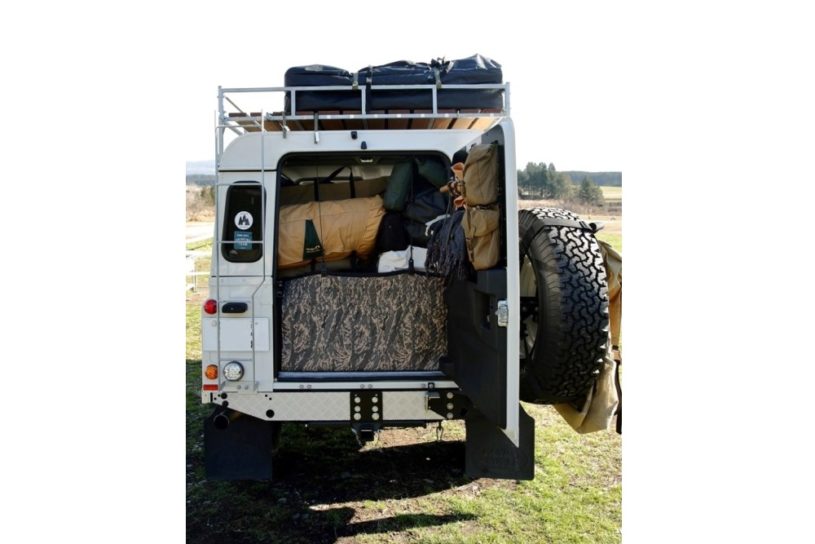 It has been set up in a great camping style with a wooden board roof rack, side steps, bumper guards with aluminum stripes, rear ladders and wood handles. The interior is also nicely finished off with a 2DIN navigation panel.

It’s impressive that they have taken advantage of the height and robustness of the car by attaching a car side tarp and lantern hanger. 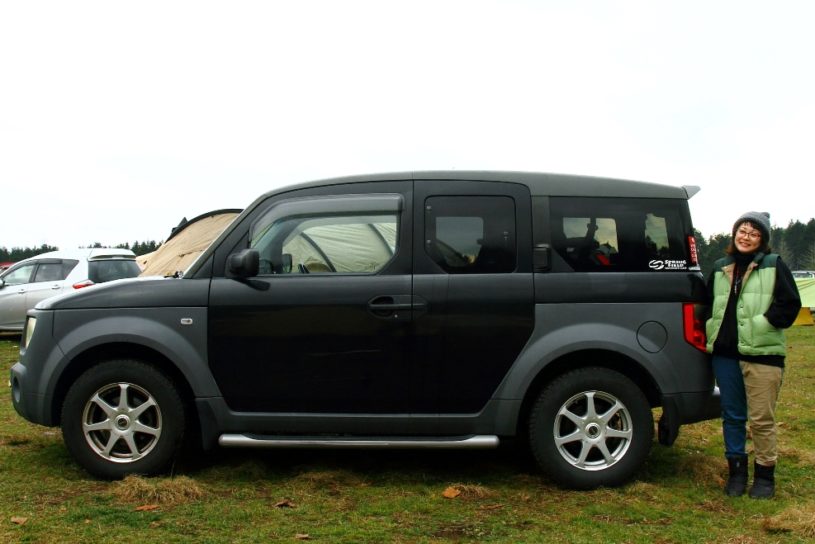 The Element is Honda’s North American exclusive model which has since been imported and sold in Japan for a couple of years since 2003. Over recent years, fashion conscious campers have become and emerging market and there has been an increase in the number of units in circulation. Just like Honda’s Crossroads model, this type of minivan and SUV crossover is becoming increasingly popular. 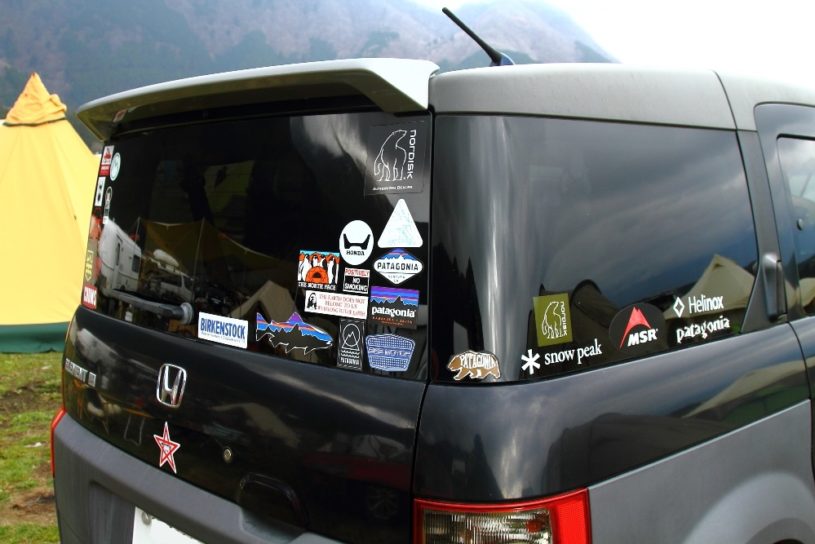 Marimekkonn is an avid fan of outdoor activities such as mountain climbing, snowboarding and of course camping. She originally purchased this car after being introduced to it at the store where she originally intended to buy a Hustler.

“The exterior which has a resin (Clouding) weaved in really gives off an ‘outdoor’ impression which is also pretty cool right. It’s pretty old though so it’s starting to fade haha”. Lots of outdoor brand stickers are emblazoned on the rear door and mirror giving the car a real festival vibe. 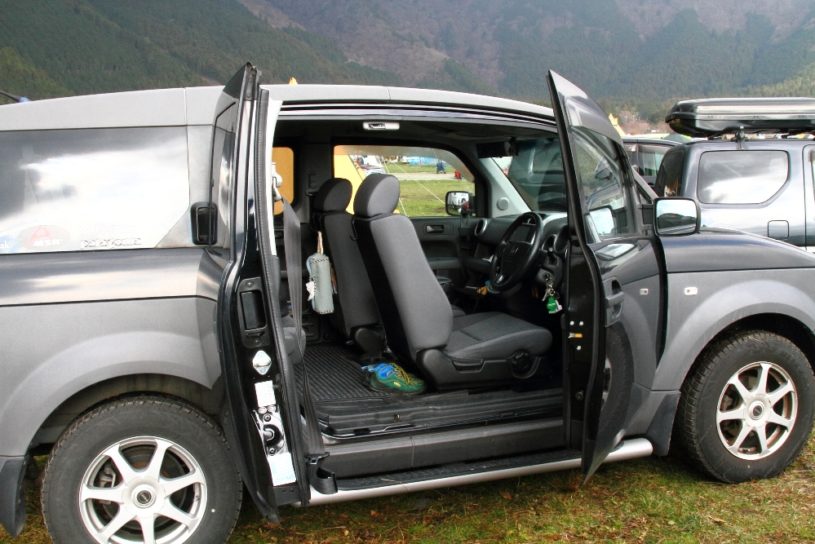 This model is full of equipment, such as double doors and a retro dial switch that can be switch that can be operated even when wearing gloves. While usually being a commuter vehicle or for family shopping trips but it seems to be very multi use and great for all manner of leisure activities.