The 3rd annual GO OUT WINTER CAMP was held on the 15th and 16th of December 2018. Campers arrived to the base camp in below freezing temperature。Here we present the 2rd and final part of our participants snaps.

Please make sure to check out our other articles:

Make the most of DIY to create fashionable vehicle make-over! 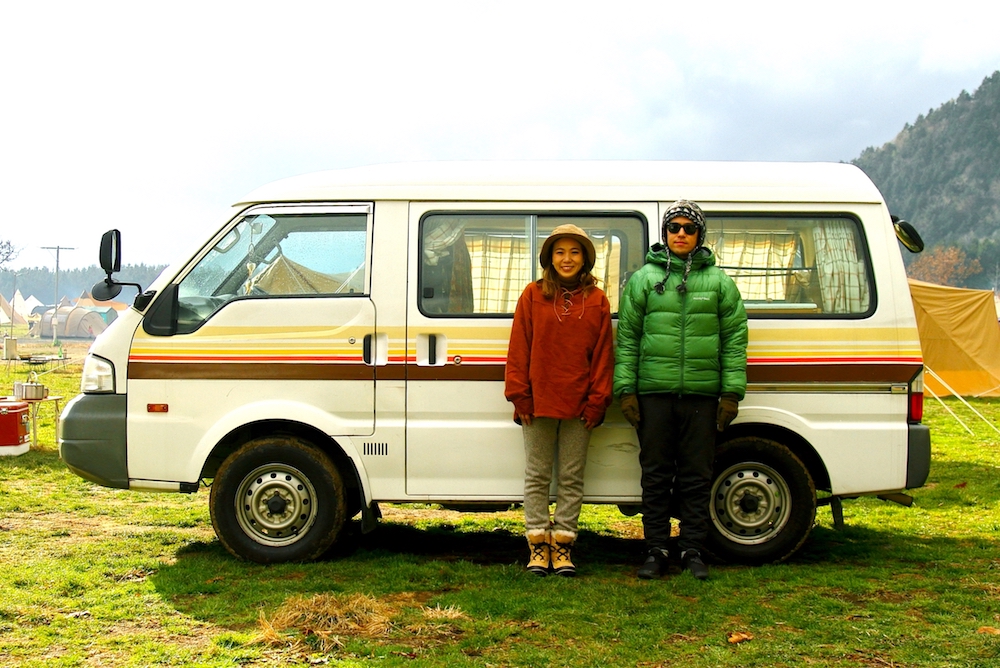 Yuriexx67 is a popular camping instagrammer who also took part in out Gas Stove and Petit Pan Project（http://web.goout.jp/gear/79454/）. Having recently gotten married let’s check out the pairs beloved car! Originally a commercial use cab-over business van, they have customized it through clever DIY to make it suitable for camping and outdoor use.

Even using reasonably priced items and resources with the feminine perspective on hand you can really change the appearance. 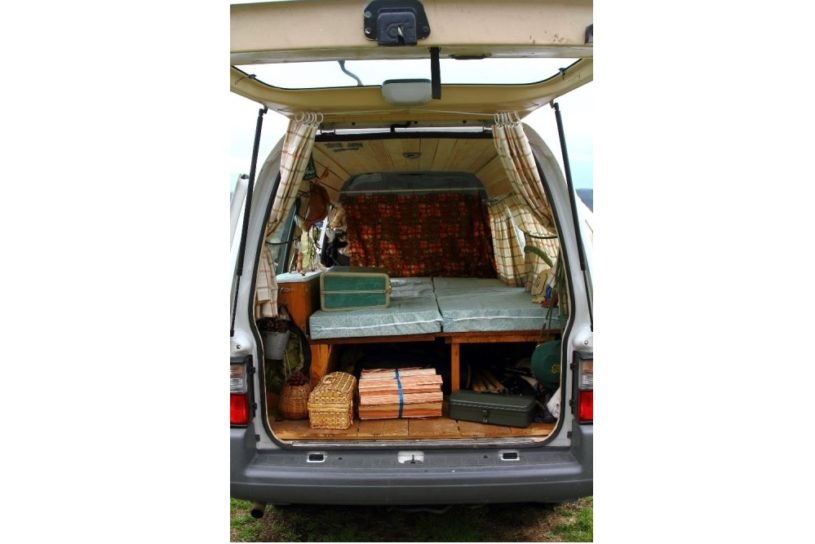 The 4th generation Vanette is already retro flavored with the line tape, and to this they have added a curtain rail and check curtains, wooden racks and ceiling, plus bed made from apple crates and a urethane mat to create an easy space to relax in. 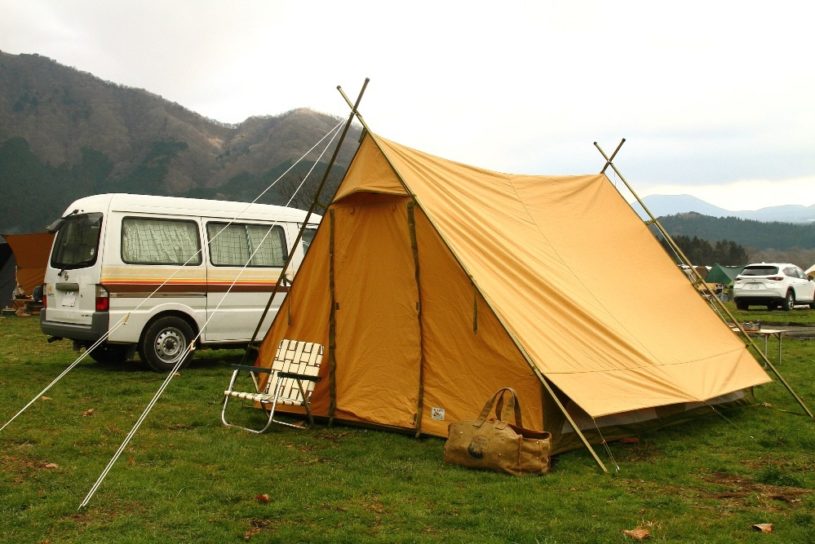 “ I always wanted a VW Vanagon or Type 2 but the price was also too expensive so In the end we decided to go for a reasonable care that was just right for us. That’s when we found our beloved SunSea No.1 (cars nickname) which is rugged, and can run for miles, plus the compact size means that even an inexperienced driver like myself has no worries”!

As he said this we observed the various signs of wear and tear but also the love that has gone into the vehicle. Even with a basic, rugged van like this, by incorporating your own personal touches can give it real personality. 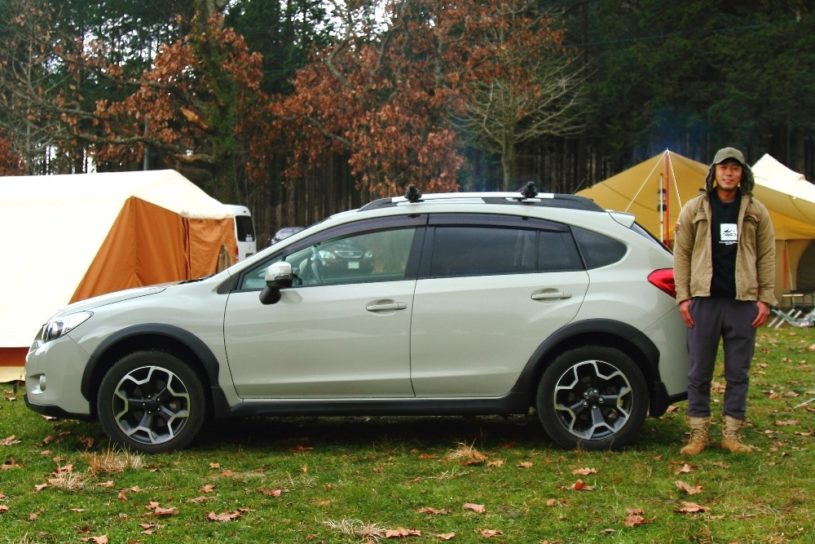 The XV is a well refined and sporty model within the compact SUV genre. It is based on the Hatchback Impreza so the handling is also excellent, while also being equipped with Subaru’s legendary horizontal engine (FB20).

Mr Masato purchased it six years ago as soon as the model changed from the previous iteration. 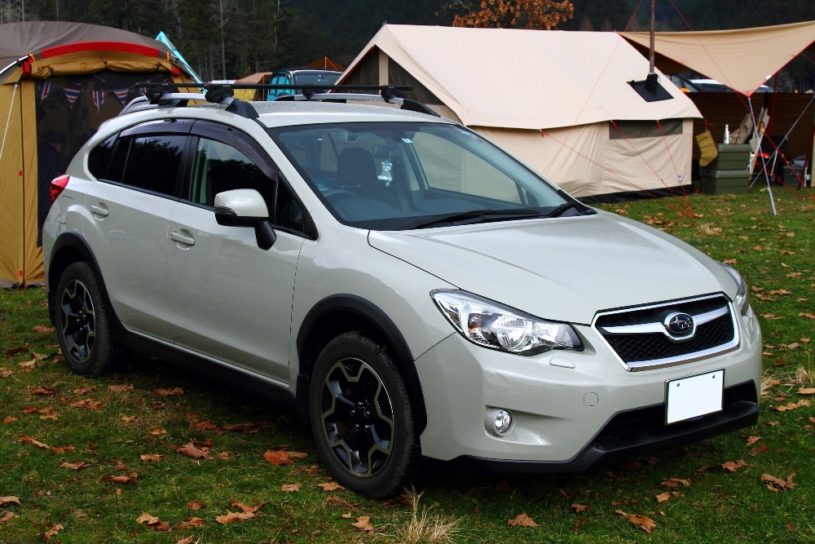 “I have always liked sports cars and previously owned a Skyline 370GT. I was never really into the SUV style but the XV has the style of a sports car but is also practical for commuting to work and also for shopping trips”.

The attachment to Subaru vehicles is also closely linked to their high safety performance. The functions and overall safety standards are notoriously high and this means he can enjoy driving with confidence. 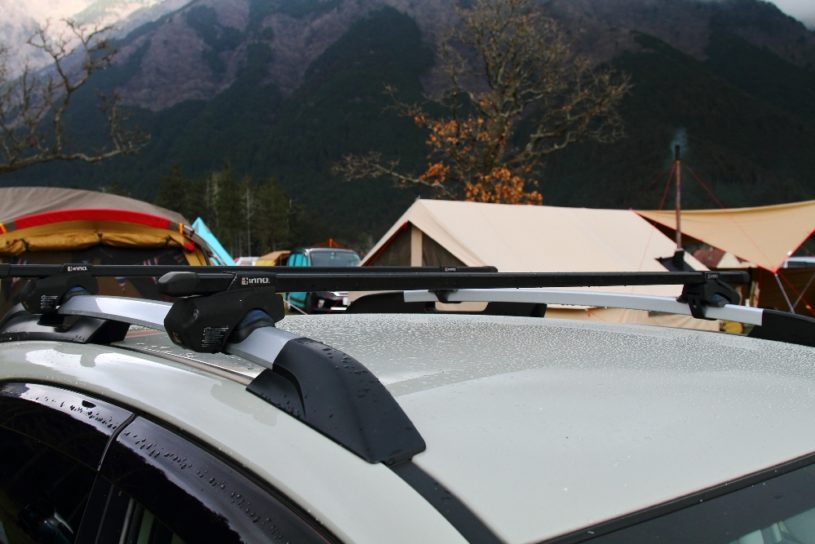 The desert khaki body matches with his like for casual military styles and the roof bar from Inno is a great practical addition. Mr Masato has less than a year experience with camping and his main interests are centre around auto-camping and the car cultural that surrounds it. 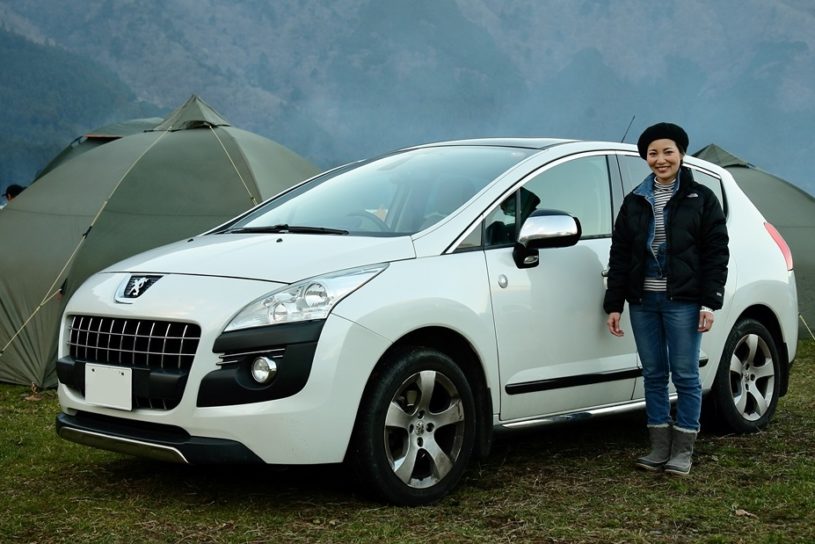 aliiiiz_k7n is here with her 5 year old daughter. Using a prominent Helport Varanger Dome as a base she has created a kangaroo style tent site. The car of choice is also an unusual one, opting for a French Peugeot SUV 3008.

This model was first released in 2009 and its monoform silhouette gives off a unique atmosphere. Until the release of this mode, Peugeot7s SUVs were always developed on an OEM basis by Mitsubishi but this is the first fully in house developed model. 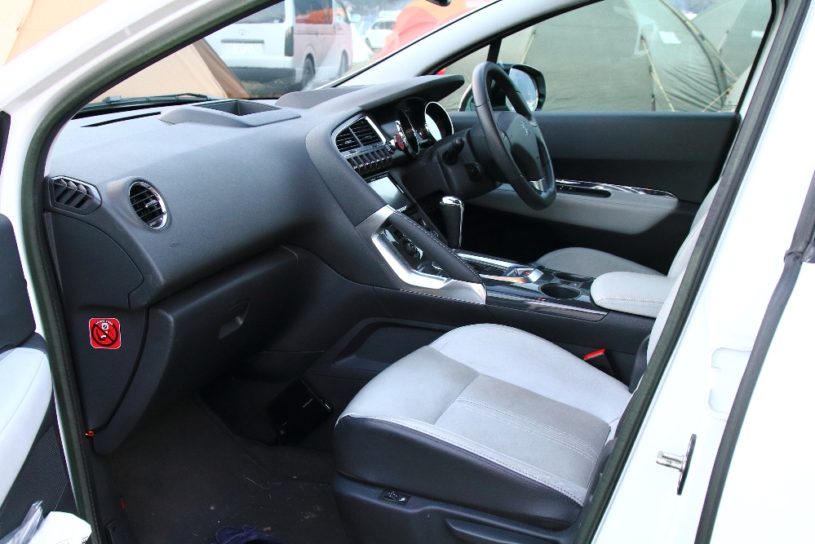 “My husband isn’t very interested in outdoor activities so I couldn’t really go for a full outdoor model, but this 3008 isn’t very intimidating and can be used for daily activities such as school runs and shopping. It’s also pretty uncommon to see in the outdoors community so that was also a plus for me”. 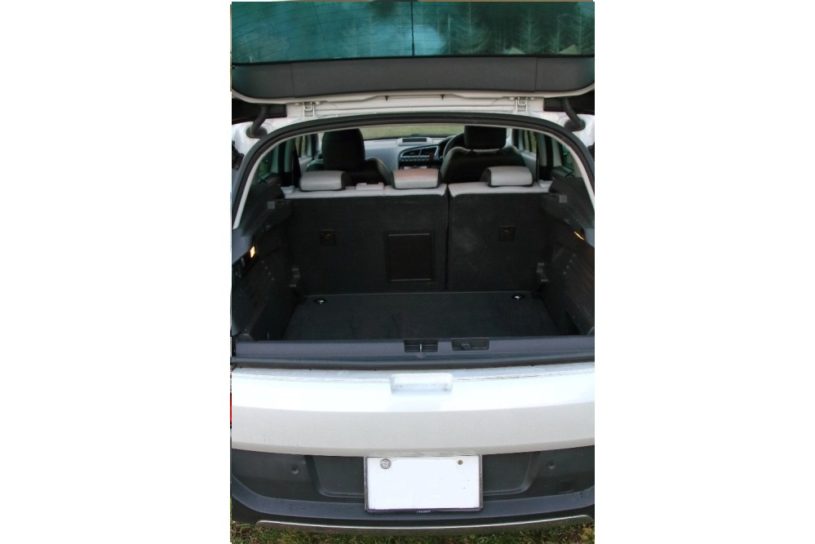 This model comes with two tone seats, a high roof to create a feeling of spaciousness and also a sun roof for use in warm weather. The trunk can be arranged to accommodate large volumes of luggage if required as seen in the set up in the picture above. From outdoor life to everyday activities it’s a perfect match for aliiiiz_k7n.

A suave gentleman hidden inside this American car! 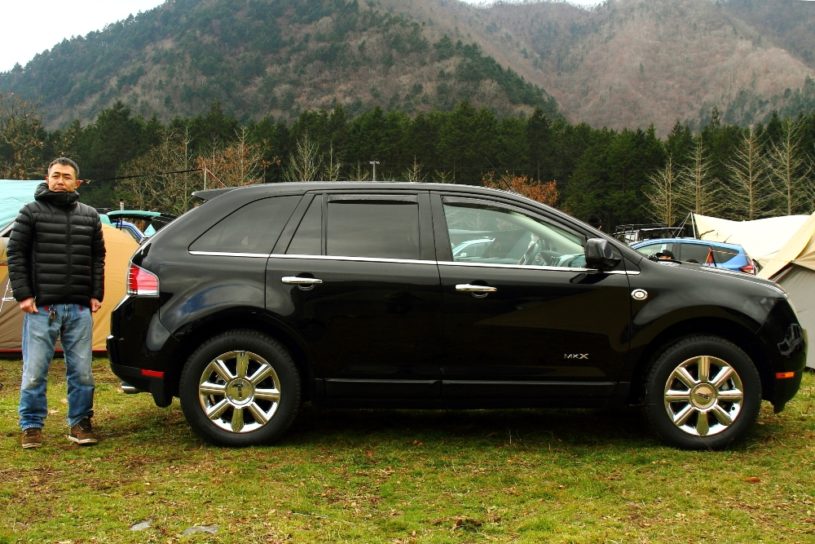 Just as I thought “That’s a really cool car” I realized the owner was well known to GO OUT, BALLISTICS representative Mr Tsukahara. He previously owned a 1971 Mercedes Benz 300SEL, a super classical car, but since the birth of his child he has now changed over to the Lincoln MKX. 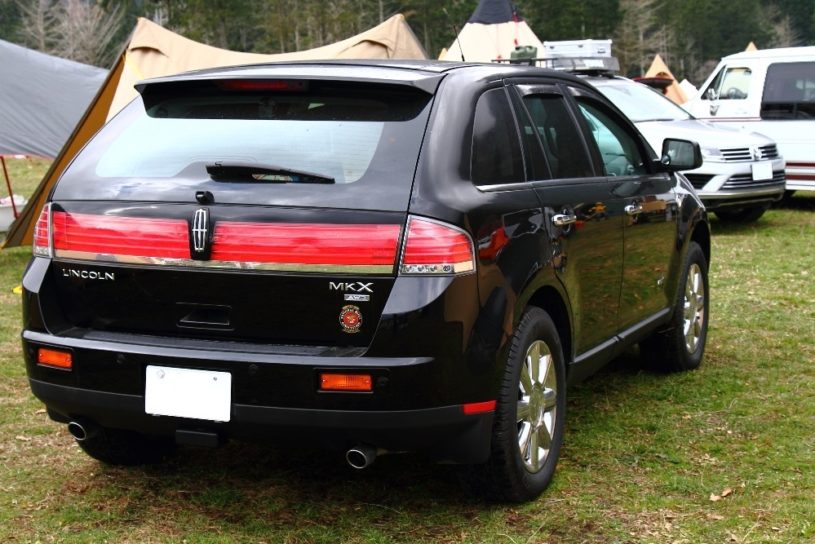 The commonly held assumption is that American cars have high fuel consumption but this is quite different to other Ford offerings like the Navigator (5.4L) with a relatively low 3.5L engine. The actual fuel consumption is between 7-8km/h which is a perfect range for a family car. “It’s pretty cute compared to my previous 6300cc Benz right haha” said Mr Tsukahara. 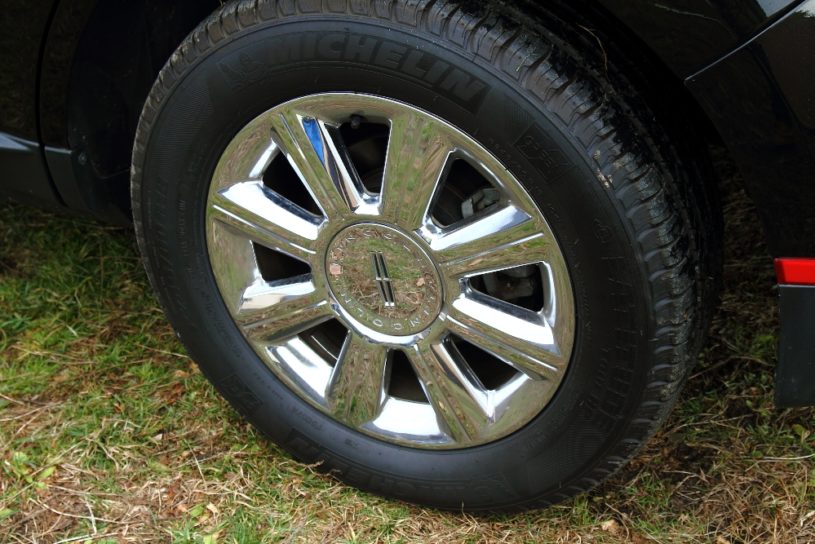 The mesh grill and chrome plated wheels are unique to this first generation model and give it an air of class and prestige. The mirror was also plated originally but I didn’t like it so it appears to have been wrapped in black. The tail lamp is also a fairly unique point. I’m hoping I can become a distinguished enough gentleman to ride this type of car with style one day!