Jeep Wrangler but this time we will learn about the military use off-roader the Land Rover Defender. In Japan, now is the time to purchase or upgrade a new car before the tax increase comes into effect.

Excellence passed down over the generations……。 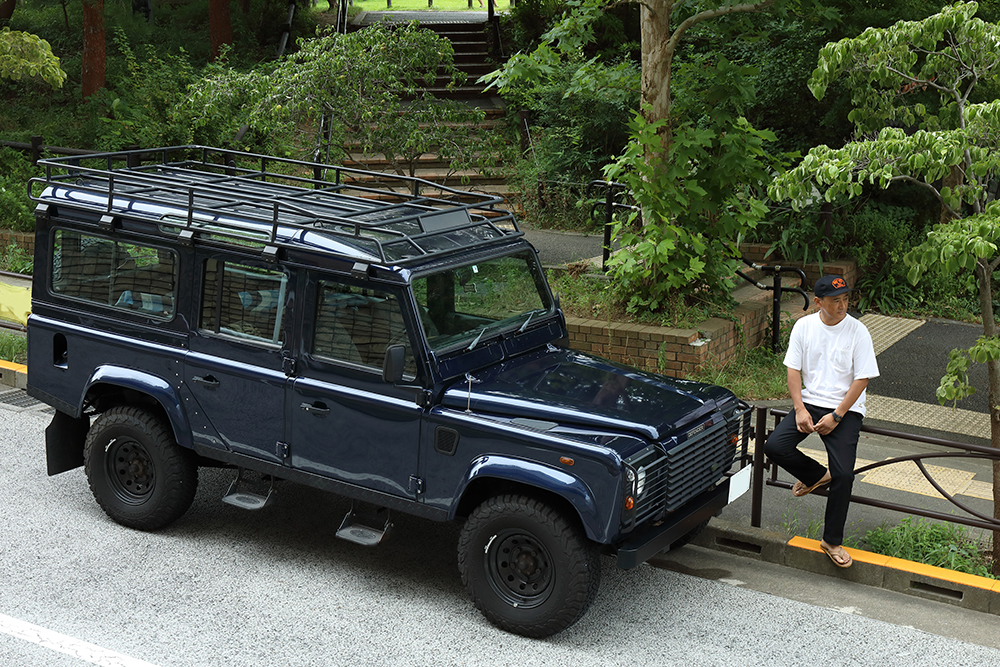 Hidetaka Akudo: Representative of Standard California. When he was a high school student he encountered surfing and fell in love with American surf and skate culture. He opened his own shop ‘Standard California’ in 2003 and now produces his own original clothing.

A long established off roader manufactured by Land Rover in The UK since 1948, it was actually first named the defender in the 1990’s.

Adopting a tough ladder frame and chassis with an aluminum body, this has long been a favorite among off road enthusiasts as well as practical use by the police and military. Although it was discontinued in 2013 it still remains popular. 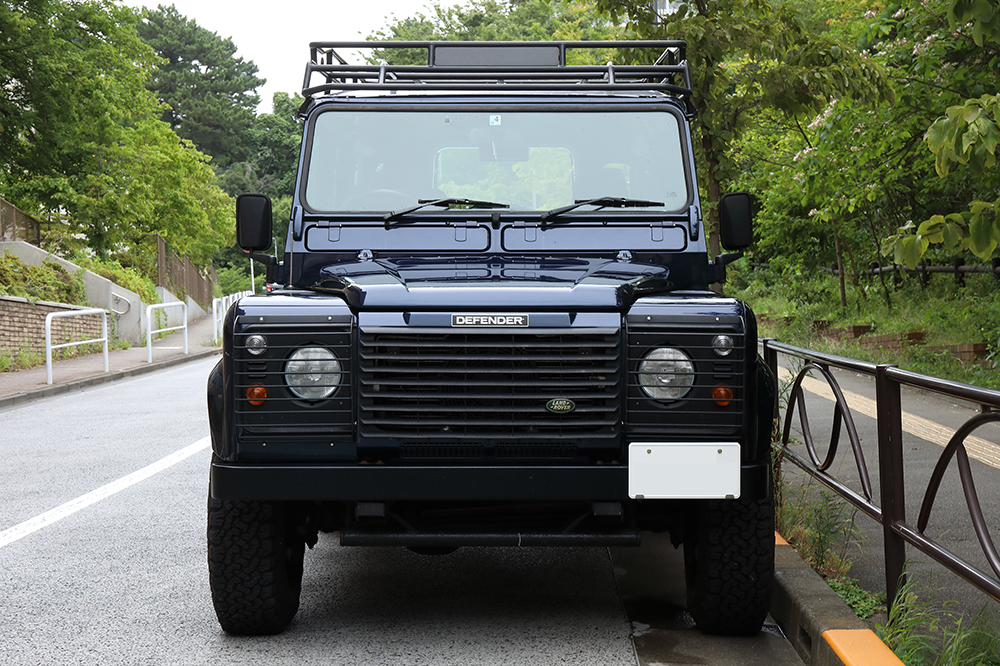 Mr Akudo bought it about 3 years ago from Twin Land in Sagamihara, Kanagawa Prefecture which specializes in Land Rover vehicles.

“I’ve continuously owned Land Rover’s since the first and second generation but I’m a little reluctant to switch to the 3rd generation when it’s time to replace it”. 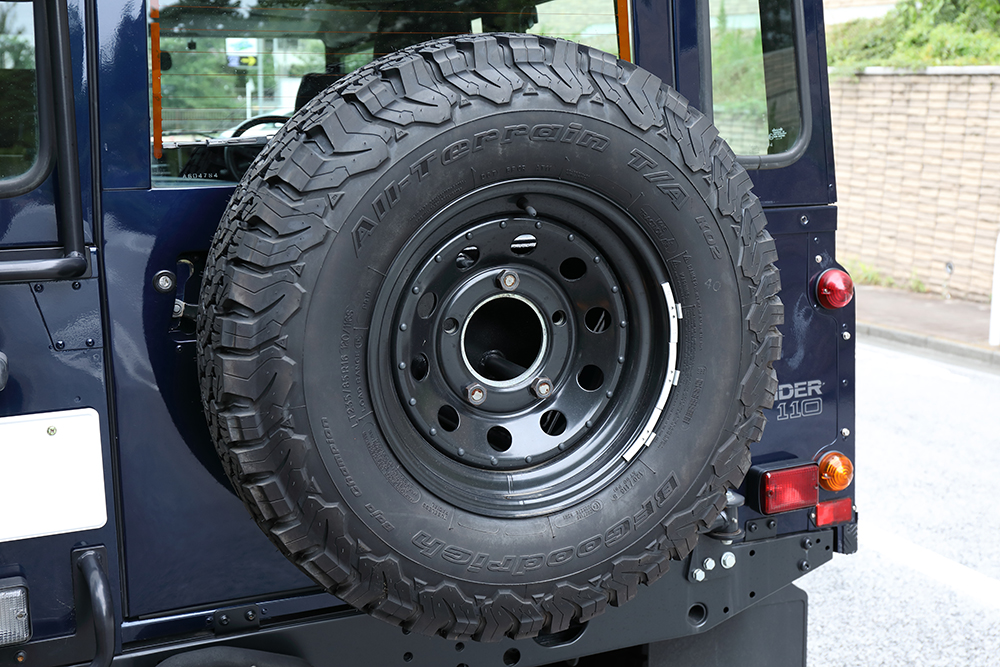 “I think that might be because the Discovery 3 has removed the spare tire fitted to the rear hatch that always made me think of 4WD”.

A lovingly repaired and restored car.

“I had been thinking about getting a new Discovery for a long time and that’s when I consulted with Twin Land and they told me about this model which needed a lot of repairs to the body but I thought this chance probably wouldn’t come around again so I decided to buy it”. 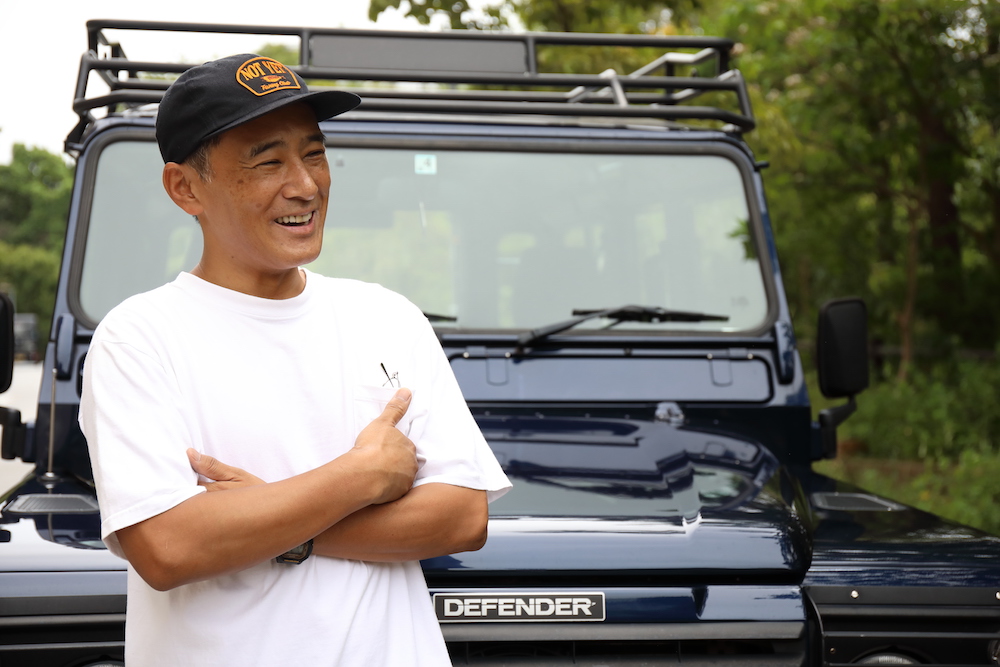 “Repairing the damaged body was the main thing but I once I removed the body I fully cleaned it, repainted and then reassembled it again. I’ve been using it regularly for about 3 years without any major problems or breakdowns yet. The design is also timeless so I don’t think I’ll ever get tired of it.”

Unified color tone even in the smallest details 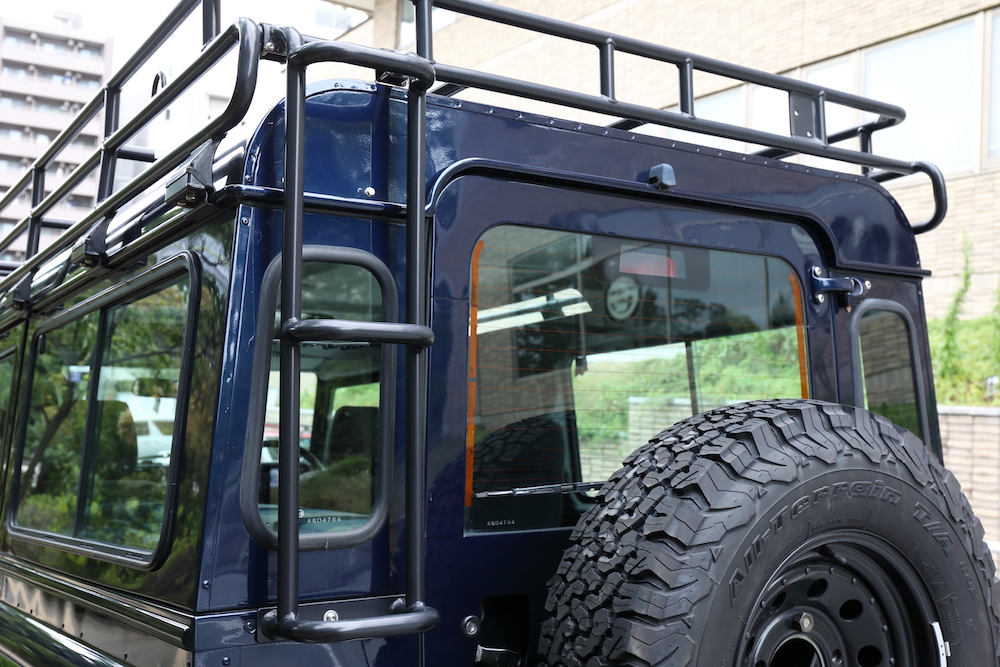 He was wondering whether or not to go for a white body but ended up deciding on the dark Oslo Blue, which is synonymous with the Land Rover brand. Other parts of the vehicle like the ladder, roof rack and wheel trims are all finished in black to match the dark blue aesthetic and give it an adult refined feel. 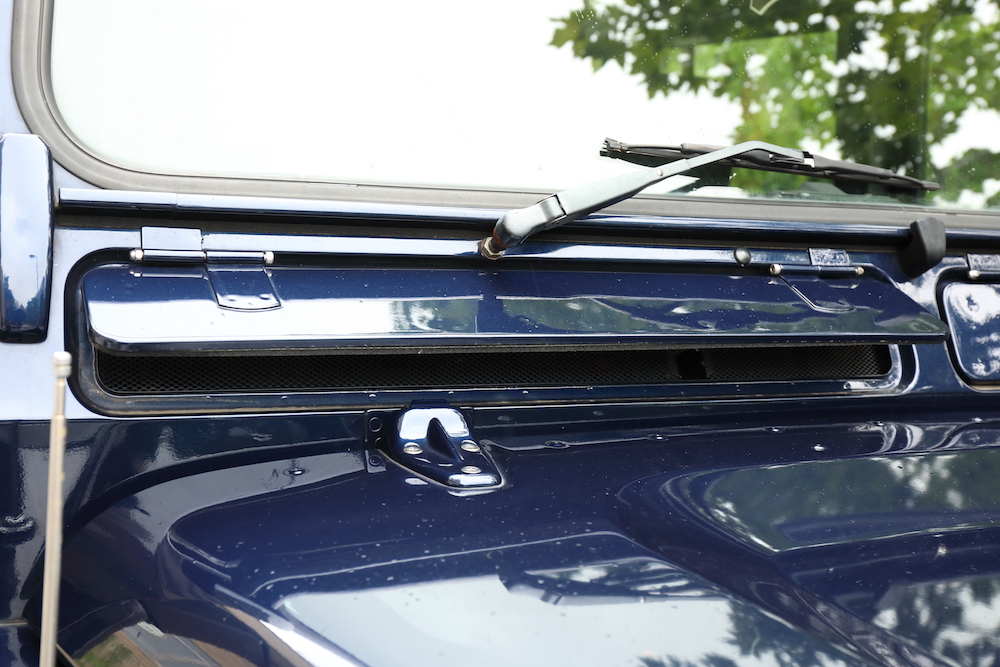 A duct that can be open and closed from the driver’s seat that allows fresh air to flow into the airside of the vehicle is equipped underneath the windshield. Although the design is principally the same in older models they do not come equipped with this handy function.

Rain leaks and uncomfortable for passengers. 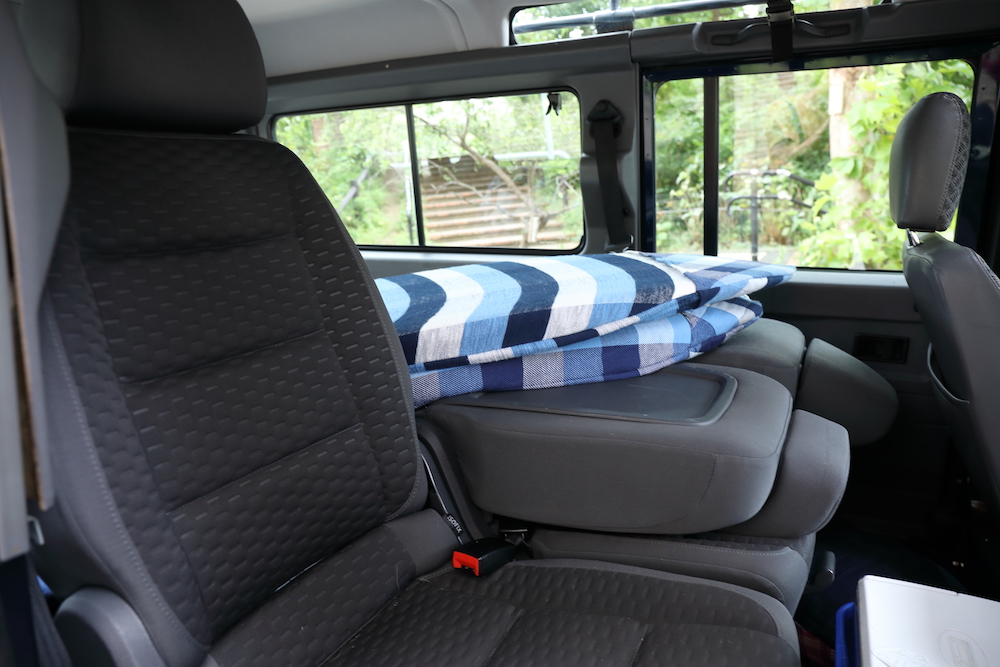 It has been said that the ladder type frame used in the Defender dates back to old carriages and that has still carried through to this model. Although it is dynamic enough to be easy to drive on tough terrain it is not primarily designed to ensure passenger comfort. 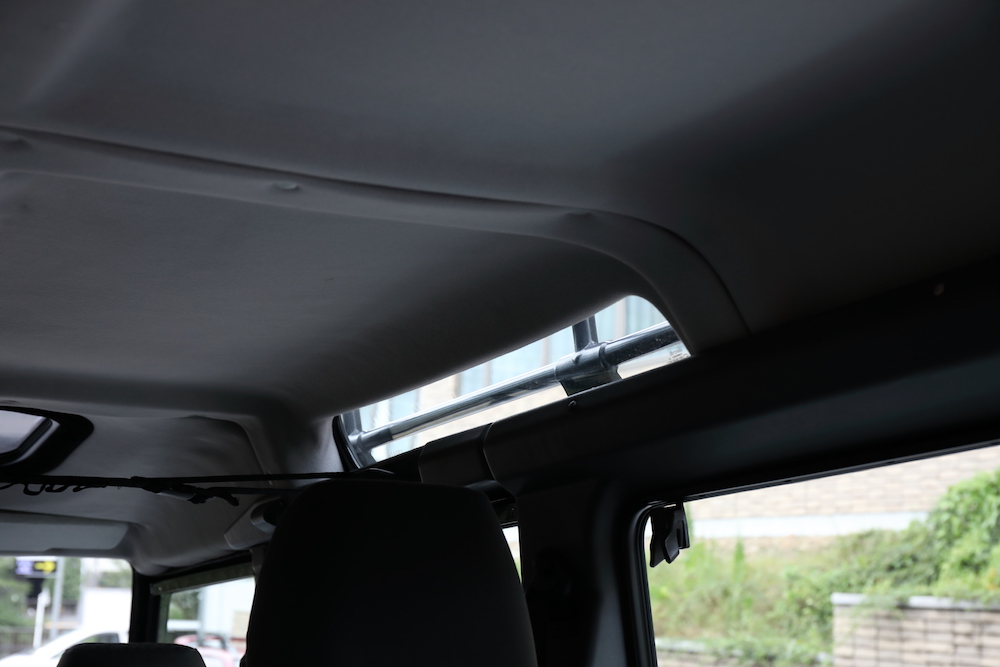 Another slight problem with the Defender can be water leakage. This seems to be a fundamental issue with the structure and therefore can only be mitigated by taking proactive measures yourself.

Primarily a hobbyist car for surfing and camping. 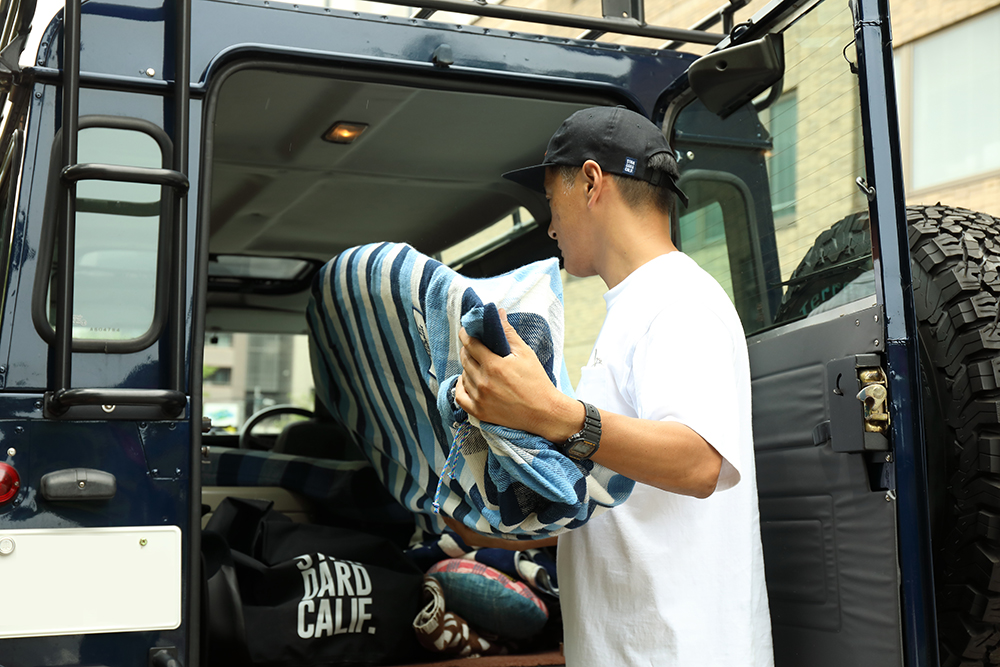 The Defender is a great fit for Mr Akudo’s hobbies like surfing and camping due to the large luggage space. Of course it is also suitable for long drives but its takes a reasonable amount of physical energy.

The 3 rear seats can all be reclined individually to customize the space to meet your luggage needs. It seems as if he is considering further customizing the vehicle in the future to make it a more comfortable long distance drive.